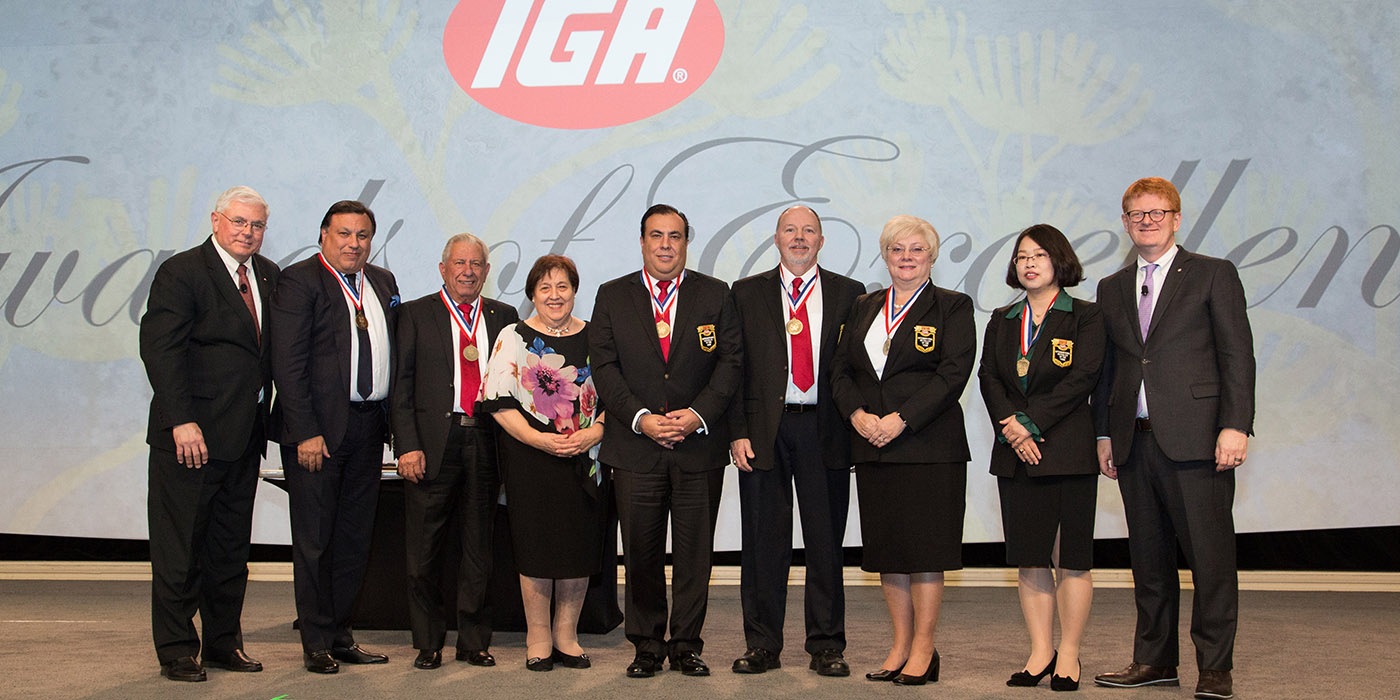 IGA International Retailers of the Year

IGA named three 2018 IGA International Retailers of the Year during the IGA Awards of Excellence Brunch on Sunday, Feb. 11. The awards were bestowed upon IGA retailers who, based on IGA’s globally applied standards, have achieved exemplary excellence in retailing and advancement of the IGA Brand.

The winning retailers are:

Celebrating 100 years in business this year, the Baker family has five IGAs in Ohio, including award-winning Baker’s IGA in Newcomerstown. Gary and Terrie Baker, who have worked side by side in the business for 40 years, attribute their legacy of success to their ongoing commitment to fostering a caring culture for their employees, shoppers, and community. The Newcomerstown store is known throughout the area it serves for fun promotional events, local favorite deli items made from Baker’s signature recipes, and giving back to the community.

The Romeo family owns 40 IGA stores across South Australia and New South Wales. McLaren Vale Foodland IGA stands out with a truly unique and innovative shopping experience that includes a walk-through cheese room displaying a vast range of local and internationally made cheeses; a fresh sushi bar with its own sushi chef; an extensive selection of gourmet produce, meats and wines.

Xin Yu Lou Department Store Group has been serving shoppers in Hebei China for 34 years. The company’s motto, “Focus on the shoppers and lead them to a healthy, quality life” guides the store’s attention to the wellbeing of shoppers and employees alike. Buyers from Xin Yu Lou carefully source products from around the world, bringing healthy and safe fresh food, and quality clothing and products.

All six IGA Hometown Proud retailers were honored during the IGA Awards of Excellence Brunch on Sunday, Feb. 11 at the IGA Global Rally.

“It's clear to me that our IGA 2018 International Retailers of the Year and IGA USA Hometown Proud Retailers are some of the best in the business, and it’s amazing to see how the entrepreneurial spirit comes shining through,” IGA CEO John Ross says. “From the specialty items they’re creating in their delis and bakeries and the way they merchandise local products, to the promotions that keep their stores fun and interesting, each of these businesses is a veritable think tank of innovative ideas reflecting the pride and creativity of local ownership. And while these stores are a clear representation of the diversity of different cultures from around the world, the one thing that is common across all of them is their undeniable commitment to the customers and communities they serve.”

Romeo Retail Group, a family-owned business run by Joe Romeo and family and operating in Australia’s toughest trade area, grew from 1 IGA in 2000 to 40 by making their stores the go-to place for unique, fresh offerings and deli items—particularly when it comes to special occasions and entertaining. Since adding a walk-in cheese room to their award-winning McLaren Vale Foodland IGA store and establishing regular wine and cheese tastings, cheese has become the store’s second biggest profit generator (behind produce).

Brothers Ed and Carl Penta, owner of four McKinnon’s IGA stores in Massachusetts and Connecticut, pride themselves on providing the largest selection of meat in New England in their Portsmouth location. There’s a service counter for custom cuts of meat, but the bulk of the store’s sales on a day-to-day basis come from the 240-foot meat case, with quick and easy meal solutions like sirloin tips, stuffed pork chops, marinated chicken, and their own bottled sauces. Local pork and beef from Maine Family Farms is a huge draw, as is McKinnon’s Best Beef brands—lower-priced quality meats that the team finds by combing the Boston markets and beyond for the best deals.

With a large supermarket chain on almost every corner of his trade area, Greg King, owner of three IGA stores in central California, relies on fresh, from-scratch offerings and extensive sampling to create a point of difference. His store’s top selling items—like Grandma’s Potato Salad, artisanal sourdough and house-smoked meats—are produced onsite from the stores’ own recipes. Extensive sampling of the stores’ rotating menus and innovative promotions designed to educate shoppers about local foods make shopping a fun, family-focused event.

As a third-generation IGA retailer with one of the longest standing IGA stores in the world, Kurt Rodhe attributes his family’s continued success to his willingness to change along with his customers’ changing needs. Recognizing that his shoppers were looking for a partner to help them make better choices for healthier lifestyles, Rodhe hired a full-time, certified natural health professional to place a focus on health and expand the store’s wellness product offerings, boosting sales throughout the store and establishing a true differentiation in his marketplace.

“You may know that for the last ten years I have been working as either a marketing or retail consultant for the biggest retail chains in the world,” IGA CEO John Ross says. “I've been to stores all over the world, and seen the best of what the big national chains have to offer. Now, having visited retailers all over the IGA family, I can tell you that those national chains have nothing on the innovative programs our best IGA entrepreneurs are doing. That's why I created the CEO's award for innovation. We need to reward risk taking, creative thinking and bold merchandising ideas. Grocery retailing and shopper expectations are changing so fast and we need innovative leadership faster than ever before! The first four retailers to win this new award are the perfect ambassadors to show the world that IGA is ready to lead the way in the innovative, fun and hyperlocal experiences shoppers want.”

Previous Story
← Is Supporting Local Business Important to You? Then so is net neutrality…
Next Story
IGA Names IGA 2018 Global Red Oval Partner of the Year →