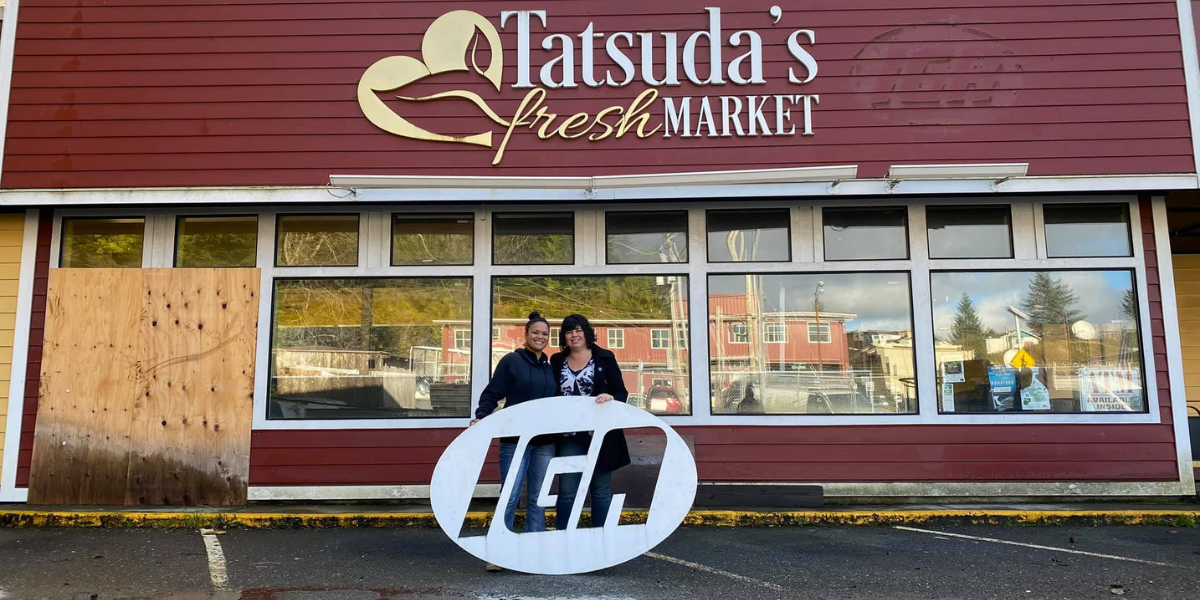 Celebrating the Legacy of Tatsuda's IGA

The Tatsuda family has a long history in the coastal island town of Ketchikan, Alaska, with 104 years in business spanning four generations. But a tragedy this past February left Tatsuda’s IGA facing an uncertain future, just as the world began to face the uncertainty of a global pandemic.

During the night of February 27, a massive rockslide from the steep, forested cliffs behind Tatsuda’s IGA buried the back of the store in debris, collapsing the roof and causing extensive damage. “We’re so thankful that this happened in the middle of the night and no one was in the store,” said Katherine Tatsuda, who owns and operates the store along with her father, Bill, and has spent her life working in the family grocery store serving her friends, family, and neighbors in the Ketchikan community.

Katherine Tatsuda and her team give a tour of the store soon after the landslide occurred.

With huge portions of the store buried under dirt and rock, it was obvious from the beginning that it would cost more to try and salvage the store than it would to tear down and rebuild, but for the last eight months, the family has been exploring their options for the future of the store. Just this week Katherine and her family made the extremely hard decision to demolish their family store without immediate plans to reopen, but are weighing options for the future.

A female entrepreneur ahead of her time

For over 100 years, Tatsuda’s IGA has been an integral part of this Alaska coastal community. What many people don’t know is the family business was started by Katherine's great-grandmother, who like Katherine was an entrepreneurial force to be reckoned with.

Sen Seike Tatsuda was 19 years old when she arrived in the U.S. from Japan in 1914. “She had arrived in Seattle as a “Picture Bride,” which meant that she carried a picture of my great grandfather Jimmie Tatsuda. The couple met for the first time on that dock in Seattle confirming each other’s identity with the aid of the pictures,” said Katherine, who told the family’s history in a Facebook post soon after the landslide.

At her new home in Ketchikan, Sen had to walk a long way into downtown to buy groceries and carry them back home. At some point she started buying extra milk and eggs and selling them to her neighbors. That was the beginning of Jimmie’s Grocery at 407 Stedman Street, established in 1916. Sen and Jimmie’s children, grandchildren, and great-grandchildren have carried on the grocery business, which celebrated 104 years in 2020.

According to Katherine, Sen and her family overcame tremendous obstacles over the years: multiple building fires, loss of children, racism, and being forced from their homes during World War II and held in internment camps for several years. “Despite all of this, their commitment to the people in their community never wavered. They always served with generous hearts and humility,” she said. 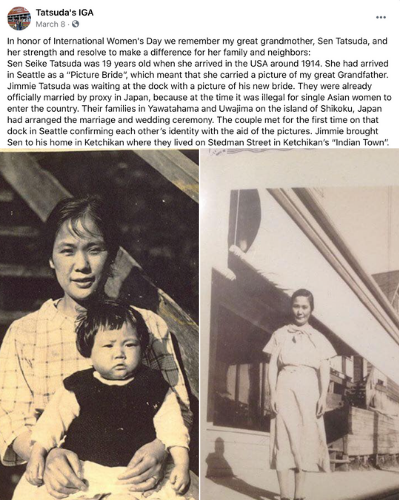 Days after the landslide, the pandemic began to take hold of the country, and it became apparent that the loss of one of the community’s most beloved grocery stores was going to be an even harder blow for the town’s 13,000 residents. That’s when the Tatsudas decided they still had a role to play in helping the community through this unprecedented and frightening time—even with their store buried under thousands of tons of debris.

When fans of the store gathered for an impromptu rally in the store parking lot to show their support, store employees gave away the store’s salvaged perishables. Then when pandemic hit in full force and panic buying began, the Tatsudas decided to repurpose a donated space in the local mall they had been using as an office into a makeshift store, and began selling bulk dry goods salvaged from the store’s backroom to help offset the shortages Ketchikan and surrounding communities were experiencing.

“The community was phenomenal to us,” Katherine said. “There was such an unbelievable outpouring of love and support with everyone asking how they could help us. We had intended to salvage what we had left of our inventory and sell it to a competitor, but when the pandemic started felt like people needed their store back, even if it was just temporary.” 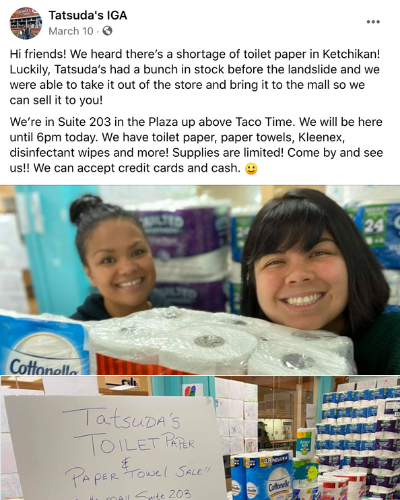 The Tatsuda’s storefront opened in the beginning of March and remained open all the way through the end of June, operating for six weeks when the mall was shut down by taking Facebook and phone orders for curbside pickup. “When the community was struggling to find paper products, we sold pallets and pallets of paper towels and toilet paper. Later we were putting together made-to-order Easter baskets. Basically, we did everything we could to help people feel normal,” Katherine said of a scenario that was anything but.

By the beginning of June the store’s inventory was running low, so they drastically marked down the remaining products and hosted three Super Saturday sales in a row, including one that beat all other one-day sales in Tatsuda’s existence. “It was a great way to close out our history,” Katherine said.

For now, as the Tatsudas sort out a path going forward, they are unsure what the future will bring, but one thing is clear: the community isn’t soon going to forget the love and support of the Tatsuda family.

“I learned a lot about how to run a grocery store by attending IGA rallies and NGA conventions,” said Katherine, who, like her father, is an IGA International Retailer of the Year. “One of the most important things I picked up is that an independent grocery should be more than a store—it should be a community center. That’s what we did. We made a community center, and in the last eight months, I’ve realized we’ve impacted thousands and thousands of lives with this store. The people of this community love us as much as we have always loved them. We’re leaving behind a legacy of kindness, generosity, and gratitude, and that means we did it right.”