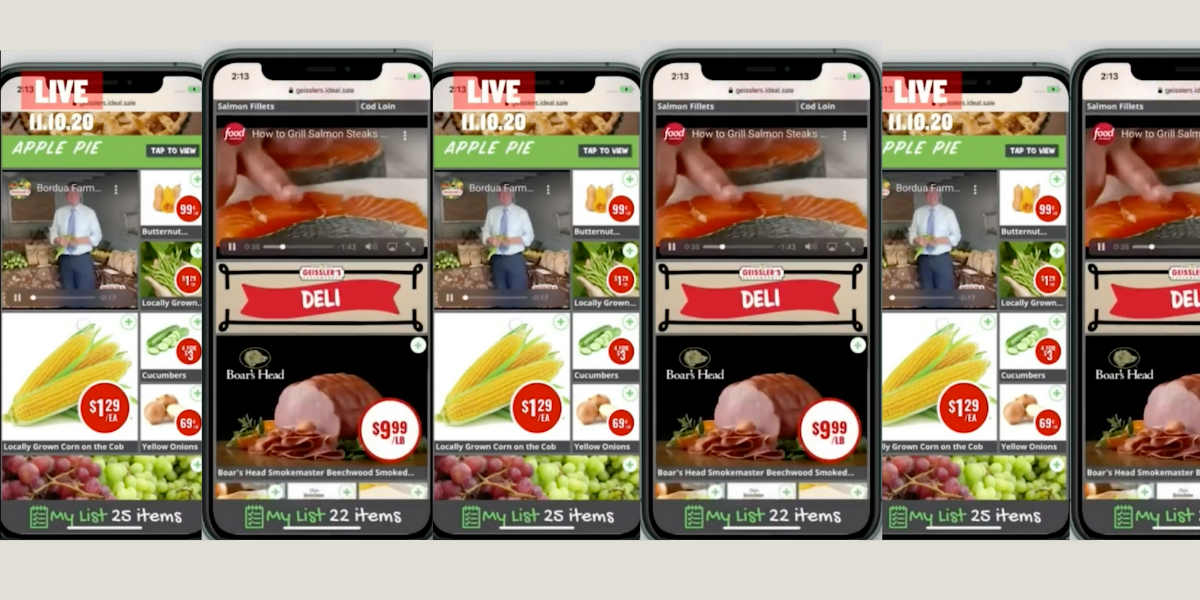 Digital Media: Is it time to let go of your weekly circular?

When it comes to advertising, independent retailers have a lot to manage, especially in print circulars. Deciding which offers to share in a limited space on a physical page is like that half-finished jigsaw puzzle that gives you anxiety whenever you look at it collecting dust on the dining room table.

In addition to that extra work, it's hard to measure print's effectiveness. "If you’ve ever been to the post office on the day your ad drops and see all your ads in the trash, it’s very frustrating," says IGA Senior Manager of Program Development Sarah Rivers.

"Digital distribution solves those problems and reaches 10 times the amount of people for the same cost as print," Rivers adds. But as we know, the internet is a vast space, so where is the best place to put those offers online and how can independent retailers affordably ensure those offers and ads actually reach shoppers?

Enter IGA’s National Digital Ad 2.0. Acting as a digital overlay to what the wholesalers, ad groups, and retailers are already doing, the program brings those efforts together in the digital space.

What is the National Digital Ad 2.0?

“The National Digital Ad 2.0 provides new methods of talking to shoppers,” says Heidi Huff, IGA’s senior director of Red Oval partnerships, who oversees the ad's national content, including offers from the world's top brands. "And now, the retailer has the opportunity to tie in their local ad to the digital space so the shopper sees both the national and local content, giving the shopper a very customized experience."

In this latest version of the ad, shoppers can find a myriad of content, including:

On top of that, IGA is ensuring the ad gets seen by shoppers. “IGA is buying the media, and we’re placing that media and driving it to millions of shoppers,” says IGA CEO John Ross. “And the great thing about digital is that we know that it works,” he continues, saying that IGA is now reaching over 35 million people with the National Digital Ad 2.0, up from about 20 million people last year.

We spoke with Sarah Rivers, who is leading the addition of local content for National Digital Ad 2.0,  to learn more about the program: why retailers need it, how it works, and how to sign up.

Why do retailers need the National Digital Ad 2.0?

Sarah Rivers: We all know that print is weakening and it’s going to be important that all of our stores make that digital connection with their shoppers.

Shoppers are more engaged with digital than with print and you can reach 10 times the amount of people with digital over print so this will solve that distribution problem, primarily that it is costly and not reaching enough people. We’re meeting your shoppers and your competitors shoppers where they are—in apps, online and in Google searches—and sending them teaser ads for your digital circular.

Additionally, CPGs are moving more and more money to digital and shopper marketing areas, which means if you don’t get into this channel, you will lose out.

How Local Content Works Within the National Digital Ad

Shoppers are used to getting national offers, like in their Target or Walmart apps. Do they really need an ad that gives them both national and local offers and content?

SR: Absolutely. This is a very unique program—there’s nothing quite like it. We’re buying media nationally but built this product locally. So we’re taking national offers—which we’re getting as independents because we’re leveraging our collective size through IGA—and combining them with independents’ local print pieces.

By bringing those national offers together with our local content, we're showing our shoppers and our competitors'—like Target or Walmart—shoppers that not only can we compete with those big box stores in terms of national offers, but we're supporting the local farms and businesses in a way that those competitors can't and are not.

How can IGA retailers customize their ads to include local offers and content?

IGA is spending hundreds of thousands of dollars on national media, which gives IGA national exposure. Then under those national offers, retailers get to put all their local content, which makes them so unique and important in their local communities and really drives shopper engagement. The local content is a key piece to keeping shoppers interested—it’s very interactive and fun to browse through and look at. Shoppers are spending five to six minutes looking at the ad digitally for our stores that are participating.

How does the ad reach so many people?

SR: This is not just digitizing your ad and putting it on your website, on your Facebook page, or in an email campaign. Those approaches only reach a small segment of your shoppers who have taken some sort of action to visit those places or receive your email.

We’re able to serve your ads up to everyone in a targeted radius of your store, thanks to location services on everyone’s phone. So we can target who we know to be your shoppers (because they move in and out of your store), and more importantly, we can also target your competitors’ shoppers.

It also keeps track of the people who are engaging with your ads and your digital circular and will find similar people and serve up ads to them. So it uses machine learning and gets smarter over time.

To reiterate: the National Digital Ad 2.0 takes your local digital circular and delivers it to your shoppers and your competitors’ shoppers, turning them into your shoppers."

Is this a one-size-fits-all program?

SR: No, it's totally customizable. This program is so different because we can run our national program along with your unique local content. In other words, we have the ability to run literally thousands of digital ad versions.

Unlike a print ad, it's also very flexible. You can change anything at a moment's notice—if you need to pull something that didn’t show up on your truck, revise a price because of competitive pricing, or promote something you’re long on, you can do it on this digital platform quickly and easily.

SR: Not at all. We’re suggesting that you make a modest change—about 20 percent of your print budget—and put it into this digital platform. This way, you’re using money you have already budgeted for advertising. If you are currently not producing a print piece, then this solution would be a great tool for you to consider to help you engage with some new shoppers and get them into your store.

Would a retailer need to stop their print circular to use the National Digital Ad 2.0?

SR: No, we’re not suggesting you stop your print ad. Certainly, there are retailers who want to and retailers who have discontinued their print. If that’s your objective, we can show you how to do it thoughtfully.

But that’s why we suggest moving a bit of your print spend over to digital. Our guess is that retailers will end up spending more on digital because they like the results so much, so it’s conceivable that retailers could spend up to 50 percent of their print budget on digital because it works so well and is so efficient. I mean, if you could reach 10 times the amount of people over print, why wouldn’t you?

How to Sign Up for the National Digital Ad 2.0

Now that Rivers has detailed the program, it's time to sign up. Schedule a quick meeting with her to discuss the program and how it can best serve your store, and ask any remaining questions you might have.

Then, once you're signed up, it's as easy as submitting a 5-column spreadsheet weekly, which Rivers says shouldn't take more than 30-60 minutes a week to put together, since it features information you probably already have. Our third party partner, Design House, will take care of the rest, uploading the national and local content to the ad and placing it in the right spots to target your shoppers and your competitors' shoppers.

What Retailers Are Saying About the National Digital Ad 2.0

Need more convincing? The National Digital Ad 2.0 is already a hit with retailers, according to Rivers. "They love it. It’s very easy to use, it’s reaching more shoppers, and it’s totally customizable," she says. "And they are getting a dashboard on their digital performance, which is something that they never got with print."

Bob Rybick, president of Geissler’s Supermarkets and chairman of the National Retailer Advisory Board, has been participating in the National Digital Ad pilot program for the past three months and has rave reviews. “It’s been going really well so far," he says. "It offered a fresh new look to our ad, allowing customers to continuously scroll through it, which is a much more fluid experience for them. They’re really enjoying finding the new items available, and a lot of those items are coming from IGA’s national ad.”

Rybick and his team are especially enjoying the flexibility the digital format offers, saying that the ability to move offers around to customize the ad and share local content mixes it up and makes it more interesting and engaging than their print ads. They are also able to quickly add or subtract products and offers depending on stock levels, which they wouldn't be able to do in a print ad.

Geissler's has also seen the impact the digital ad has had on the store's advertising demographics. Rybick says that the team expected the National Digital Ad 2.0 to be popular with a younger audience, but in fact, 57 percent of the customers using the digital ad are 55 and older, and 30 percent are 65 and older. It has also given them the opportunity to efficiently reach all geographic areas of the towns they're located in. “The digital ad is allowing us to target the borders of the town strategically and the data is showing us that we’re reaching them,” he says.

Hear more from Rybick about his experience with the National Digital Ad 2.0 and watch Rivers, Huff, and Ross discuss the program in detail at the 2020 IGA Global Rally Virtual Conference in the video below.