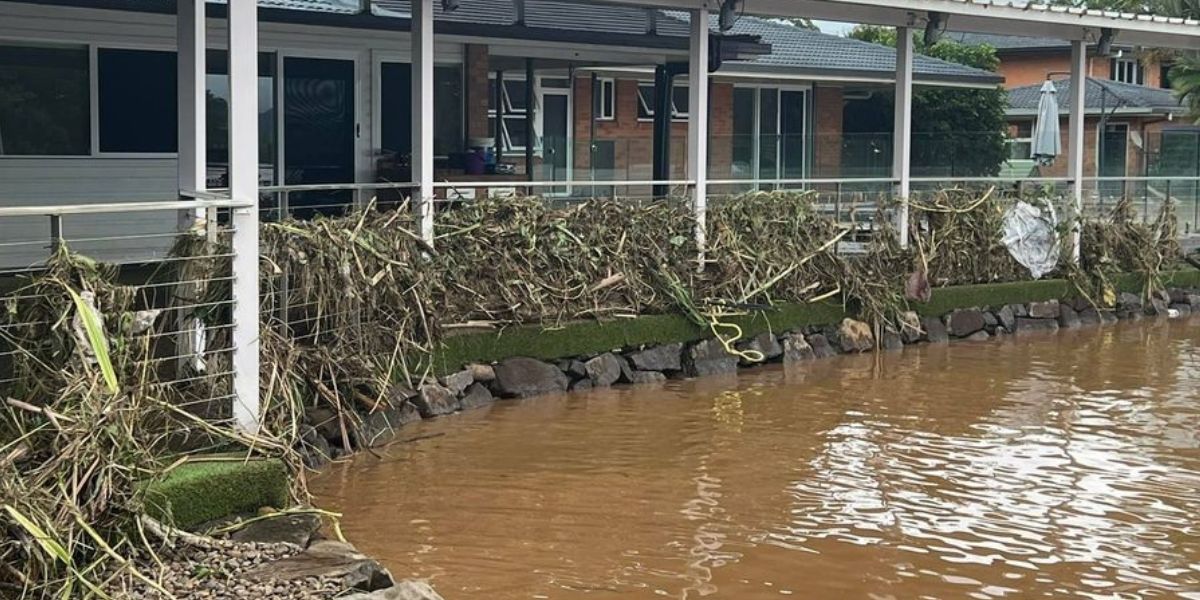 The sun has set and darkness is falling around you. In normal circumstances, one might cozy up under a blanket or be sitting down to dinner as that happens. But for Australians and owners of two IGA stores Brett and Leanne Bugg last month, those scenarios were the last thing from their minds as their home flooded and they awaited rescue.

Then they heard a relieving sound. "We heard the motor and went, 'That's not a car, that's a boat going up the road,'" Bugg said. Two brothers, Chad and Josh Curtis, had seen on Facebook that many people were awaiting rescue that wasn't coming from the army, so they hopped in their boat to help out. After a few other rescues, including a baby, the Curtis brothers found the Buggs. "The boat went right up on the veranda and we were able to jump in," Bugg said. "It was just one of those accidents of history that saved our butts."

By the end of the first week in March, Southern Queensland and northern New South Wales (NSW) had each received more than a year’s worth of rainfall in a week. It was Queensland’s worst flooding since 2011, and one of the biggest floods in recorded history for the Tweed River, which flows next to one of the Bugg's IGA stores in the town of Murwillumbah. Nearly 5,000 homes have been deemed uninhabitable from the floods, including the Bugg's home. The Stores Needed Rescue, Too

The Buggs own two IGA stores in NSW and both were cut off by floodwaters for two days. "The bigger store is built right next to the Tweed River and was supposed to be built above flood level, but obviously no one told the rain gods," Bugg said. "It became a virtual island in a massive brown sea."

Water entered the shop through the bottom window seals, covering the floors a couple of inches. "It was enough to leave a brown sludgy stain across the floor, but we had minimal stock damage and minima equipment loss," Bugg shared, adding that the biggest stock loss was the perishable foods, since the power was out for two days. 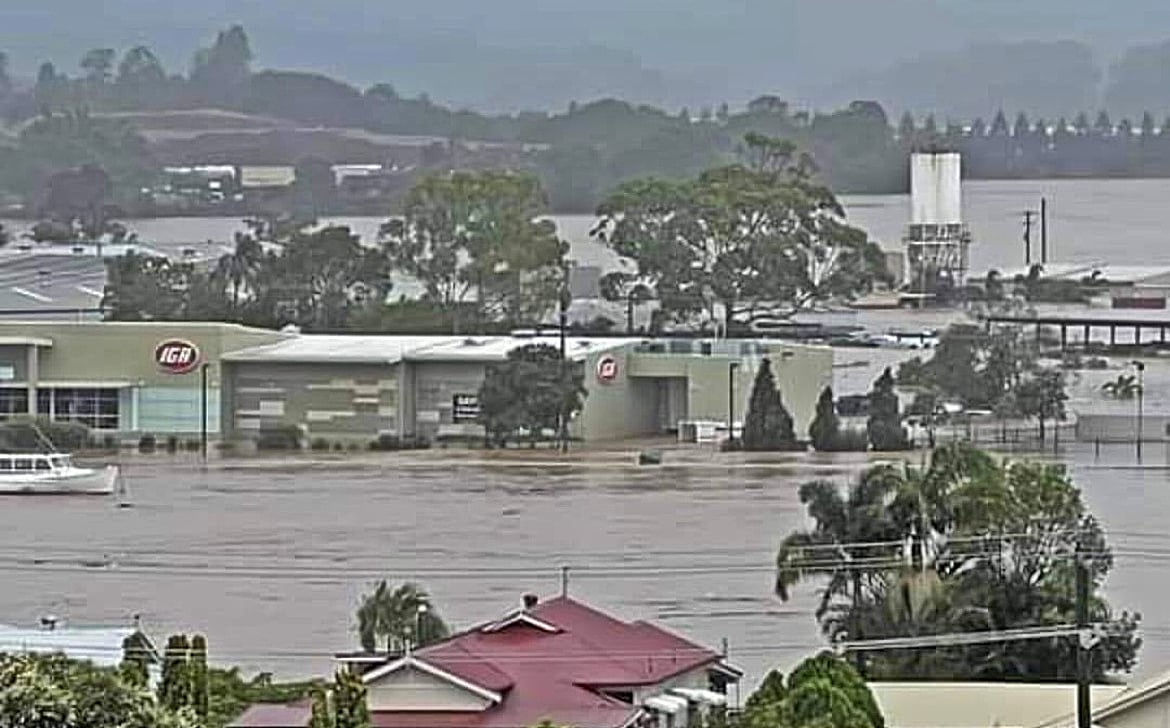 It seemed the smaller store in the center of town, which is surrounded by a flood levee, would fair better, but the pumps couldn't keep up with the rainfall. "That shop experienced 10 inches [of water] through the entire property," Bugg said, but the power stayed on, so stock loss was minimal.

In true IGA Hometown Proud fashion, the Buggs and their teams had both stores back up and running within 36 hours of the water receding. It couldn't come soon enough, as the town of 10,000 had been without food or supplies for three days. "We all pushed as hard as we could to get both stores open as quick as we could and sell what we had," Bugg said. "We couldn’t have done without our fantastic staff and all the fantastic members of the community that came down to help."

Those helpers included members of the police force, fire brigade, volunteer emergency services, and general public, plus about 10 percent of the staff, since the other 90 percent couldn't access the sites yet because the surrounding areas were still flooded.

"It was a very humbling experience having people you have never met volunteering to clean up mud and help you out when you’re at your lowest. We had members of the community stocking shelves and even manning registers after a 10-minute crash course. The customers were great. Everyone was doing what they could in such a bad situation and the customers didn’t seem to mind the longer waits and stock shortages—they were even thanking us for helping them out when I always felt it was us who should be giving thanks."

While the stores are operating and providing food and supplies again, many of the Bugg's employees have lost everything: their possessions, their homes, their cars. Many are still staying with friends or family, as Bugg said there is a lack of alternative accommodations in the area that was present even before the floods. And with an estimated 1,000 vehicles lost in their town, transportation issues are a big problem. As soon as the stores were back open, the Buggs assessed what they could give back to the community that helped them return to business so quickly. "Between our two stores, we donated pallets of food and water, plus pallets of cleaning products and supplies," Bugg said.

Once the cleanup had mostly subsided, they shifted to donating gift vouchers so that recipients could choose what they needed most, be it food or supplies or anything else.

Locals started a volunteer hub to organize everyone coming from all over Australia to help with cleanup and deliver necessities, and the Bugg's Tweed Valley IGA and IGA Murwillumbah worked closely with the hub to ensure they had what they needed. "Because so many people had lost their houses and had no means to cook, the first couple of weeks were all about providing food for meals," Bugg said. "Volunteers started cooking in their kitchens or back yards, making hundreds and hundreds of ready made meals to hand out to the community every day. We even had some using the store as a base. I’m not sure how many curries, stews, or sausages in bread were made and consumed in those first couple of weeks, but it would be thousands. It was truly awe inspiring."

In the month and a half since the floods, the stores have continued to work with local charities and the volunteer hub to ensure people who lost their homes are still able to get to school or work and have food.

The Rescued Repay The Rescuers...In Beer

As for the Curtis brothers who rescued Brett and Leanne Bugg and dozens of others with their boat? Bugg has gifted them a year of free beer to say thanks. He explained, "Like America our currency is the dollar—but Australia’s second currency is beer! We buy things with beer, we trade things with beer, and we make lots of bets with beer. It’s only natural that two young blokes who did all the hard yards during the floods rescuing not only us but dozens of others should deserve a beer. They were quite unassuming fellas and we knew they didn’t want recognition for their efforts, but it’s hard to turn down a beer."

Bugg contacted the local craft brewery who helped organize the logistics. Chad and Josh Curtis will each receive one carton of beer a week for a year. "I hope we haven't hurt their health too much," Bugg added. The Curtis brothers will also be recognized for their bravery at the annual Australia Day Awards, and Bugg plans to meet up with them again soon—but under much calmer, safer circumstances than the last time—to go fishing and "enjoy a quiet beer once our world returns to normal."

With many of their homes lost and the store in need of a massive clean up, it would be easy to feel down. But the Buggs and the teams at Tweed Valley IGA and IGA Murwillumbah are grateful for what they have left. "We were lucky because stores in towns just south of us experienced severe flooding with one being completely inundated, including the roof," Bugg said. "Some have managed to get back to trading—some haven’t. It’s a very sad situation."