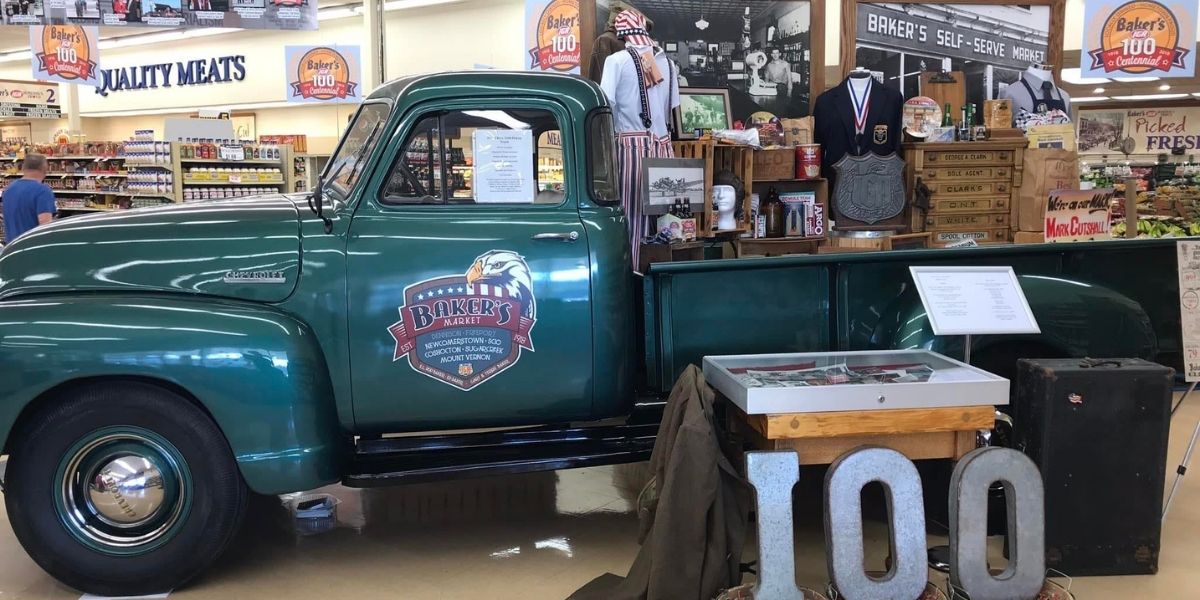 Once upon a time, a young boy ran around his dad's grocery store, helping out with small chores like stocking candy and Jell-o, and earning enough nickels and dimes to put some into savings and keep some for himself. The boy grew, and when he was 11 years old, he was officially hired at the store, earning a paycheck while he learned every aspect of the store, starting in produce and working his way around. By 16, he was cutting and grinding meat. By 18, he had left the store to go to college.

After a few years "doing things that college kids do" and perhaps "a little too much fun," the boy had become a man and returned home to work at his father's store. One day, a young lady applied for a job at a new store they were opening, but the man didn't hire her—she played in the band at her high school, and there were too many band members working at the store already, which put a strain on shifts when the band played on Friday and Saturday nights. But the man didn't forget her, and a year later, he called her for a date. The rest, they say, is history.

Gary and Terrie Baker took over full ownership of the Baker's grocery stores in 1983 when Gary's father retired, and had been running the independent grocery stores for nearly 40 years before selling their four stores in 2021 and 2022, when it was their turn to retire. And while they officially sold their last store two weeks ago at press time (late April 2022), they remain independent retailers—and IGA Hometown Proud members—at heart.

“Independents are unique. The strength of independent grocers—you have everything on the line as an owner operator. If your meat cutter quits and you fail, you lose everything,” Gary says. As a third generation independent retailer, he knew the weight and responsibility that he carried when he took over the business.

Gary's grandfather opened the first Baker's store in Dennison, Ohio in 1918, but it closed around 1933 during the Depression. "Dennison was a large railroad town, and the railroad workers went on strike. Back in those days, you didn't get paid if you were on strike," Gary explains. "This was before Visa and Mastercard, so people would pay their personal charges at the store once a month. Once the railroaders went on strike, they couldn't pay their bills, which meant my grandfather couldn't pay his vendors, so he eventually had to close up shop." But that wasn't the end of the Baker's stores.

In 1946, Gary's father returned home from World War II after serving in the Army Air Force (AAF) and being held as a Prisoner Of War (POW) in a German camp for two years. While many of his peers started working in manufacturing plants, he wanted to be in business for himself. The next generation of Baker's grocery store was founded by Gary's father and grandfather in 1946 in Freeport, Ohio. It was here that the boy—Gary—and his brother learned the store.

When Gary and Terrie became sole owners of the Baker's stores in 1983, one of the first things they wanted to do was convert the stores into IGAs. But because there were other IGA-branded stores in close proximity to their largest store, they waited. It took over 20 years, but when they learned a nearby IGA grocery store was for sale, they quickly bought it and converted all four stores to the IGA brand.

In some ways, we had been IGA all our lives," Terrie says. "But when we officially became IGA and had the brand, it told our customers who we had always been."

She continues, "Dr. Tom [Haggai] was so strong at the helm of IGA. So many of the IGA values aligned with what had been Gary’s grandfather’s and dad’s values about how to treat customers, how to take care of your community, how to provide value in your stores. It was so important to us in our operations to take care of our people, which was such a part of IGA as well. Those core values were really important to us."

In addition to those values outlined in the IGA Promise, Terrie says access to the IGA Coca-Cola Institute, marketing resources, and the Hometown Proud campaign were valuable assets of their IGA membership.

"I like to use the term 'kindred spirits,'" Gary says. "Because when you're out there on your own with four stores, you don't have a lot of leverage. So when we aligned with IGA, that's what we were looking for." Being part of the Alliance allowed them to participate in programs they wouldn't otherwise have access to. "It was so much easier to adopt [these programs] because you didn't have to reinvent the wheel, which we had been trying to do for so long as a 4-store retailer. It was such a blessing, because it's hard work! You're trying to manage your store, manage your people, manage payroll, follow the law, look out for OSHA, and do all the things you've got to do."

Even the seemingly small things take extra effort for an independent retailer. For example, once they became members of IGA, Terrie says they were able to get the uniforms they wanted at a price they could afford thanks to the size and scale of the Alliance.

After a 104-year history that saw nine locations, nearly 40 years with Gary and Terrie as sole owners, and two IGA International Retailer Of The Year Awards (in 2007 and 2018), it was time for the Baker family to retire and say goodbye to the grocery business. While Gary and Terrie started considering retirement in 2018, it took time to find the right buyers.

"You're not buying a piece of real estate," Gary explains. "You assume a lease, but what you're taking over is a group of associates and a group of customers."

The Bakers hoped that all four stores would remain with their licensed distribution company, AWG, and IGA. Unfortunately, they weren't able to ensure the latter for three of the stores, which were sold to a regional chain, but the fourth store will remain an IGA and all four will stay with AWG.

Those partnerships helped the Bakers build their business from the first store Gary's grandfather opened in 1918 through the stores he and Gary's father opened beginning in 1946. And after Gary and Terrie put their mark on the stores, they knew they needed to keep them up all the way through that last store sale. "Being able to maintain the employee base in a store and maintain the customers who had been served previously by that store are really the two most important things in selling your company," Gary says.

That echoes Gary's advice to other independent retailers thinking of selling or retiring. “If you don’t reinvest, you’re not going to get paid twice.” And reinvesting in the business to ensure the stores remained grocery stores was paramount to the Bakers. "It was essential for us to pass our stores onto another great operator, because each of those towns needs that store. You create a mini-food desert in three of those towns if that store closes," he says.

That care for their community and associates will remain with the Bakers as they ease into retirement. "Our love for the business is never going away. The whole idea of what IGA is all about is still important to us," Terrie says. Gary adds, "One day, hopefully, you'll love the new owners as much as you love shopping at Baker's." 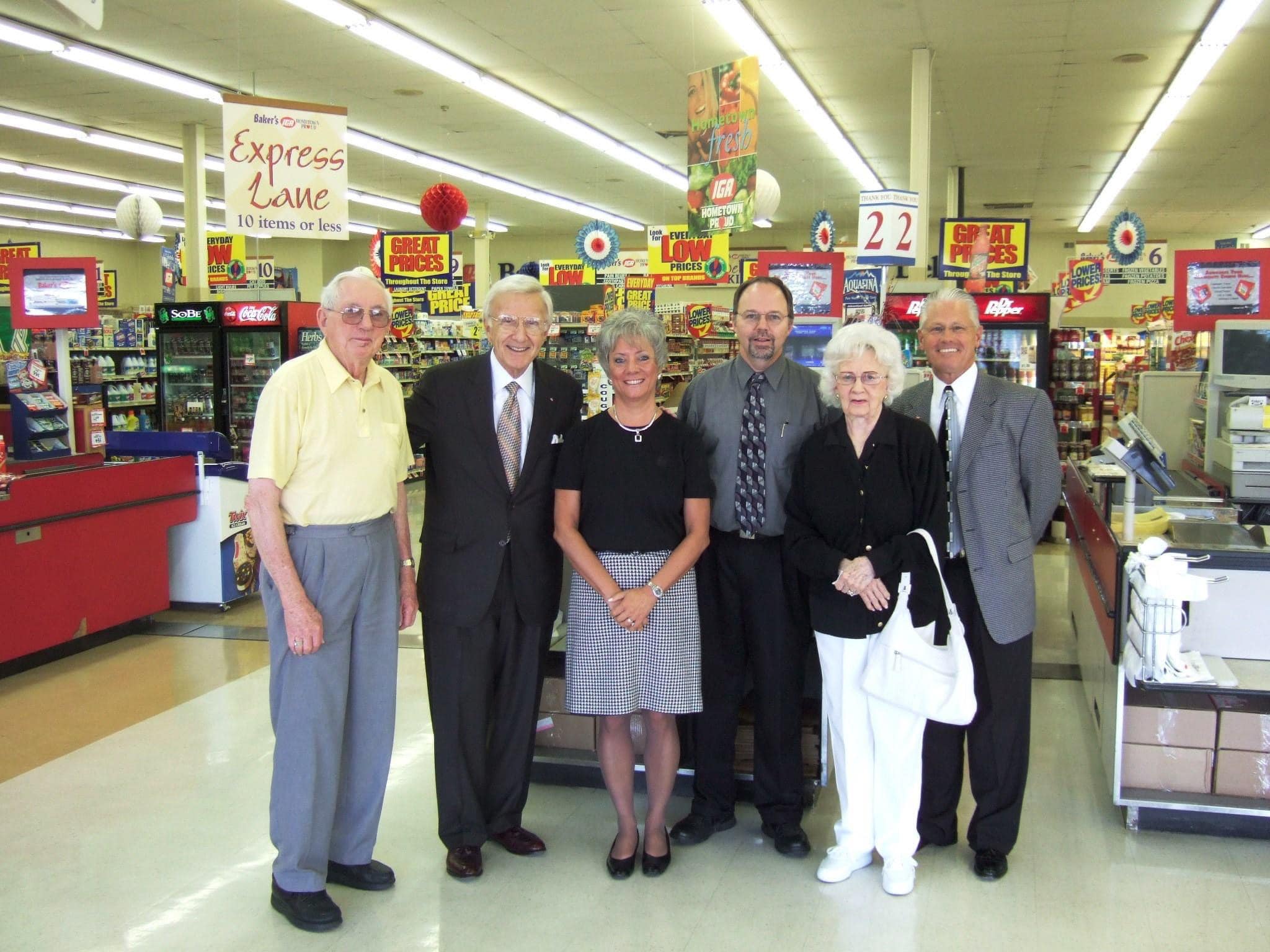 The Baker's IGA team, including Dr. Tom Haggai, second from left, and Terrie and Gary Baker, third and fourth from left, respectively. 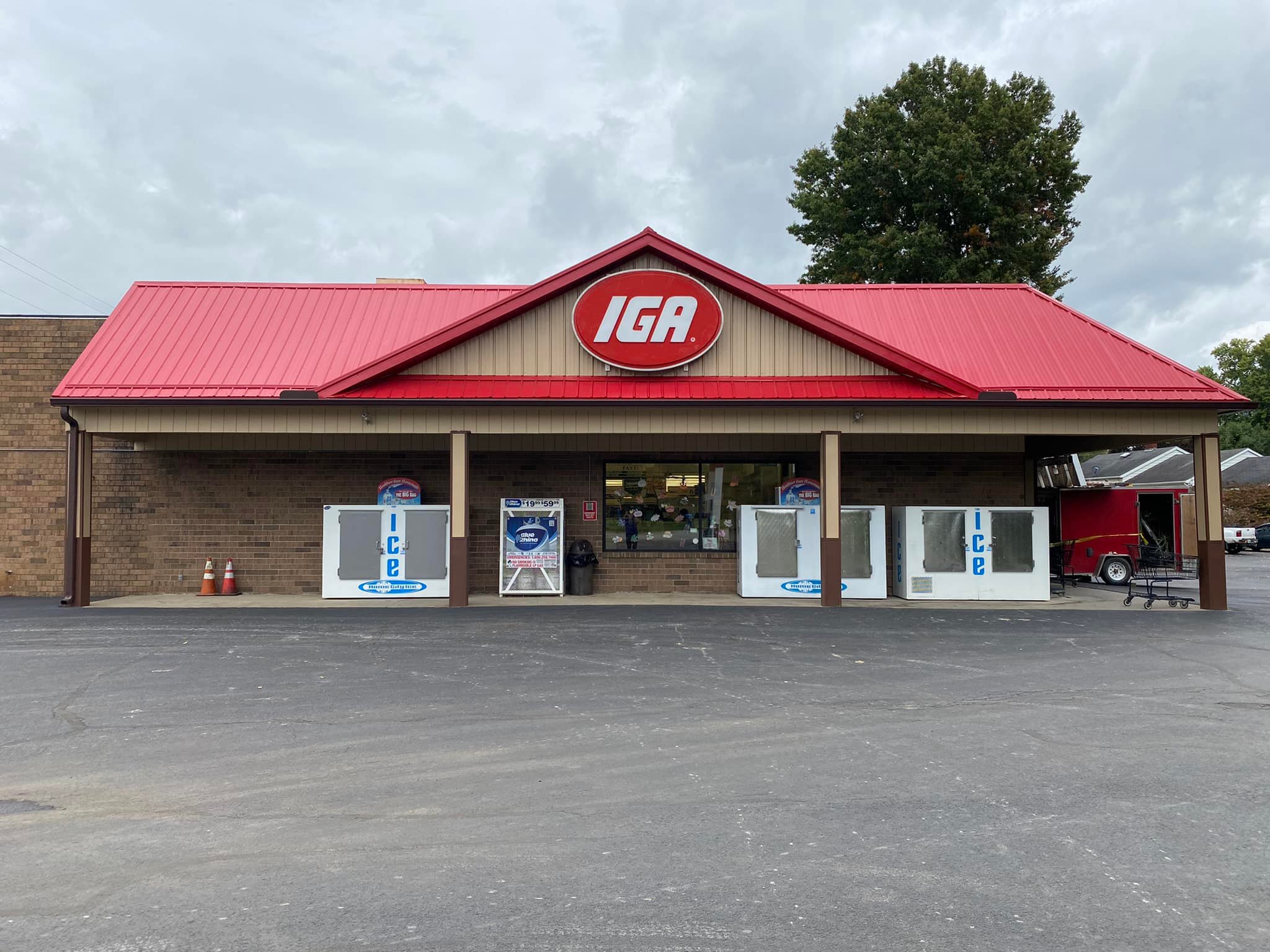 Baker's Foods photo in the newspaper 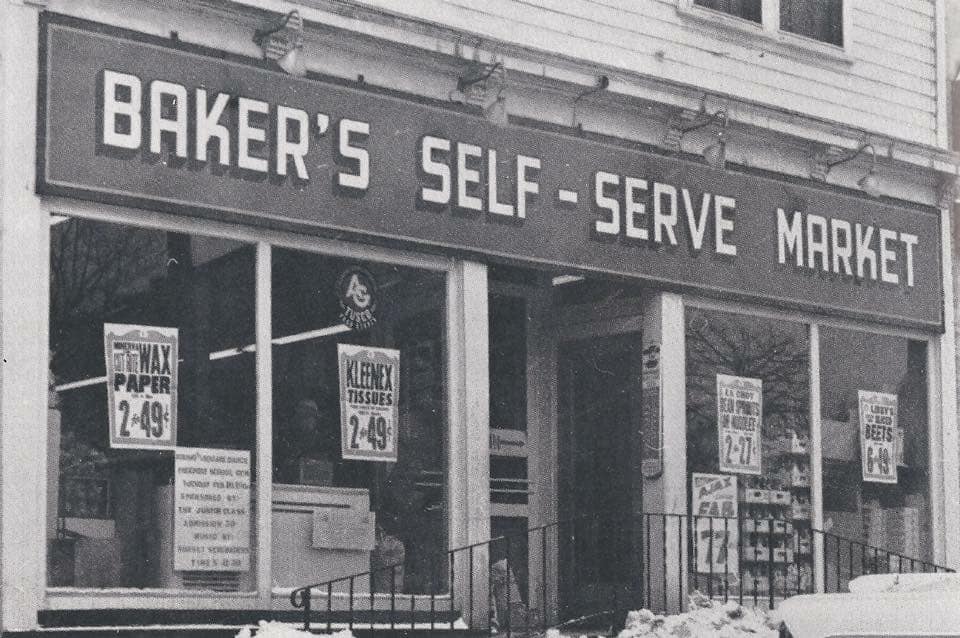 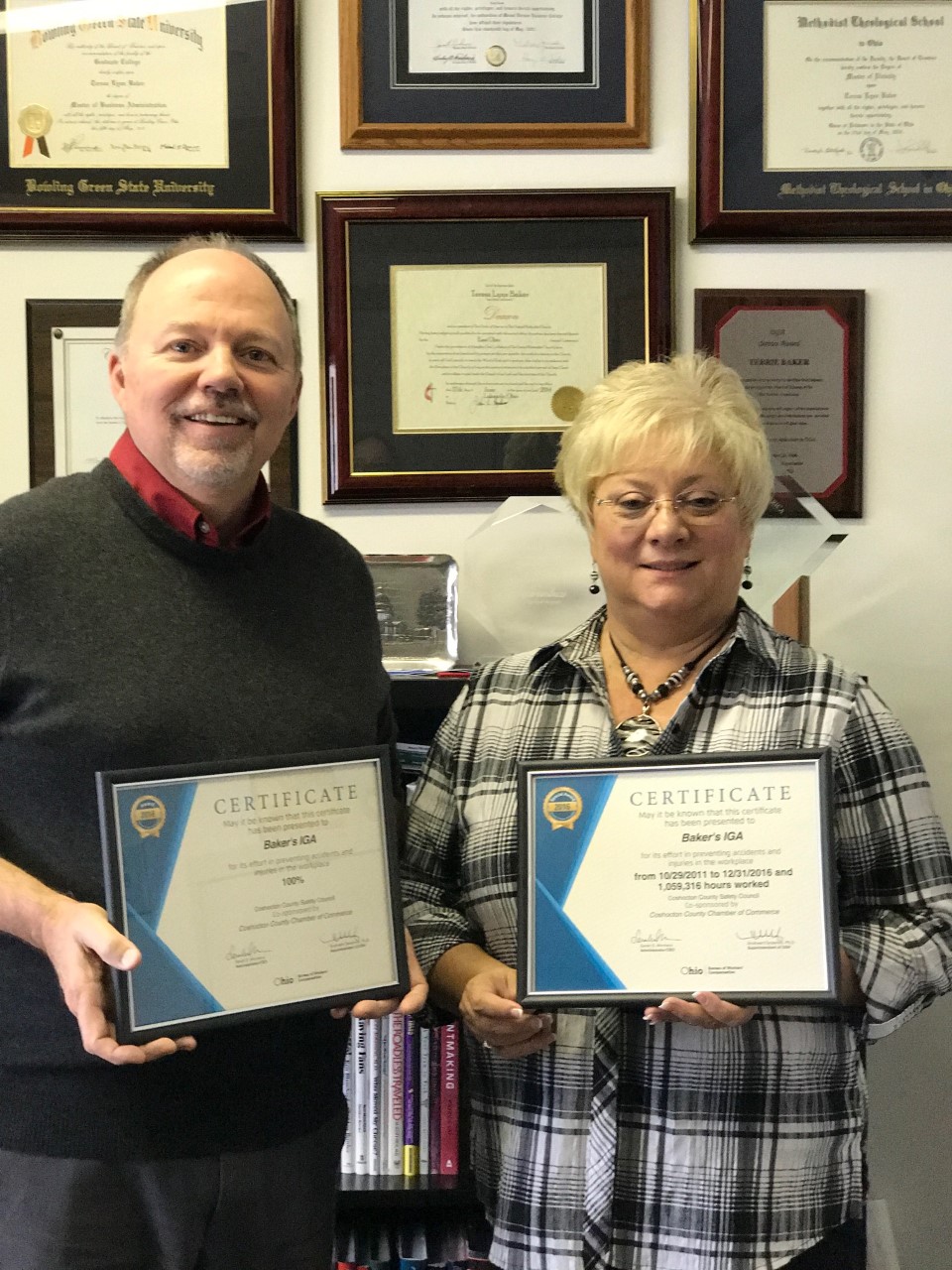 Gary and Terrie Baker receive awards for preventing accidents in the workplace. 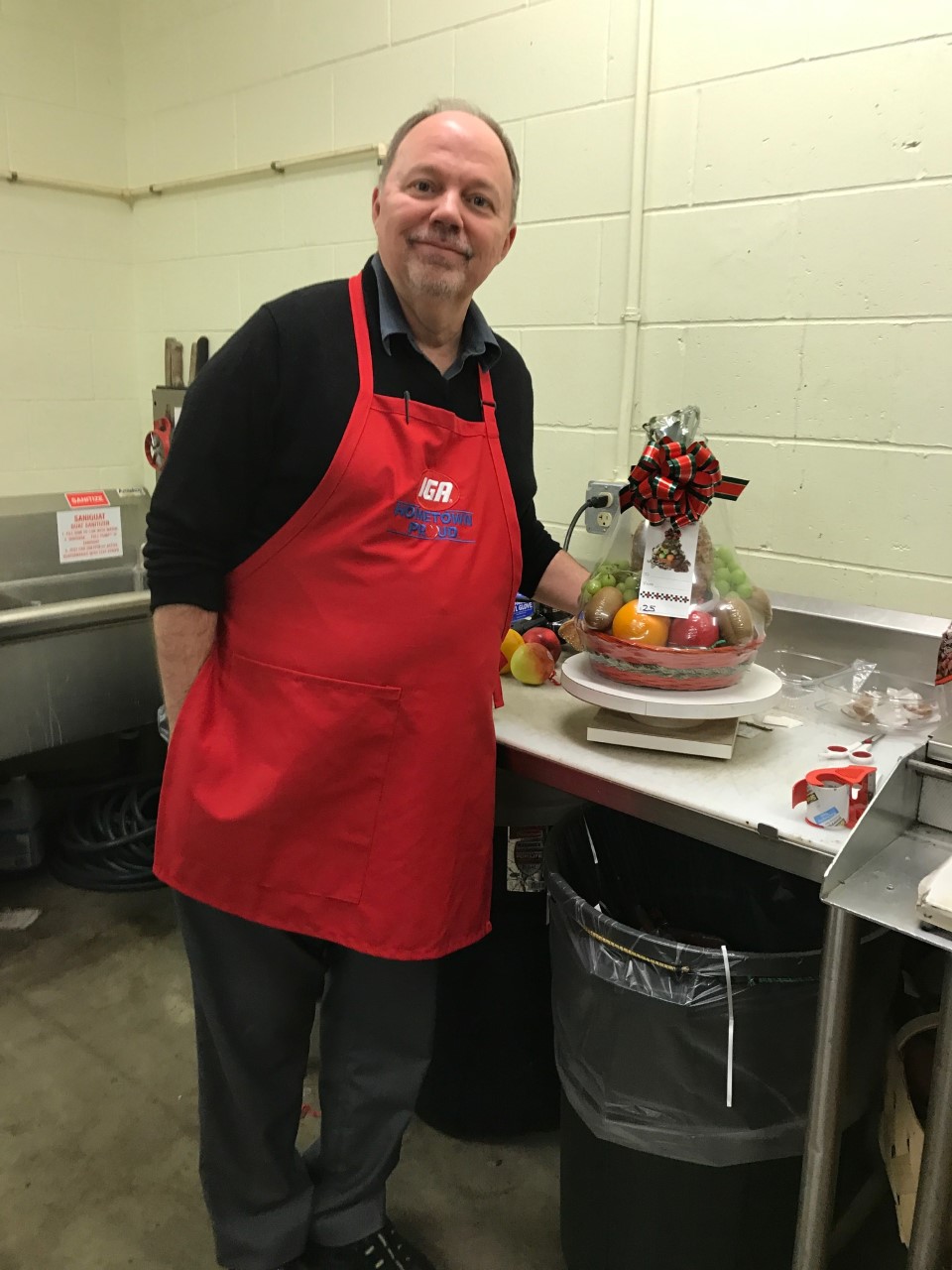