Eating healthy can be hard. Eating healthy on a tight budget can be even harder, which is precisely why Ocean Shores IGA in Ocean Shores, Washington recently joined forces with local healthcare organizations to educate shoppers with a free giveaway of bags filled with healthy foods.

The brainchild of Molina Healthcare and Sea Mar Community Health Centers, 250 bags of food were given away in two hours at the Ocean Shores IGA event, said Phoebe Boode, point of sale manager and events director for the store. “They came to us with the idea and we ran with it,” said Boode, who worked with Assistant Store Director Kayla Leganza on their end of managing the event.

According to Boode, a nutritionist from Sea Mar visited the store in advance of the giveaway and selected some fresh and healthy foods for the bags. The idea was to highlight offerings that are nutritious and also affordable: seafood, peanut butter, whole grain bread, and produce. 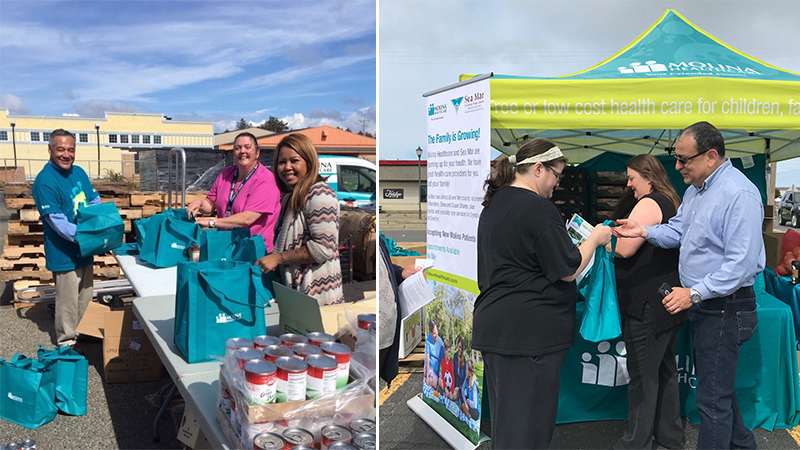 “To steer people in the direction of healthy eating, even if you are on a budget or fixed income, we wanted to show that you can eat healthy without having break to bank,” Boode said. In a rural coastal community with the nearest Walmart or other big box stores 45 minutes away, many residents rely solely on Ocean Shores IGA for their food—making this a great opportunity help educate area shoppers about healthy eating, she added.

Each bag contained the same items, which added up to about a $15 value. The healthcare partners contributed half the funds toward the food and IGA donated the rest, said Boode.

Leading up to the event, the store hung fliers and posted on social media. The local paper and radio station also helped promote the giveaway. Being in a small town, word spread fast and the morning of, people came in at 6:00 a.m. ready to go, said Leganza. While the event officially kicked off at 10:00 a.m., people could take a number earlier that morning to make sure they received a bag when the time came. “We had a lot of people asking about it ahead of time,” said Leganza.

The event’s organizing partners set up tents in the parking lot and had employees on hand to give out information and talk about healthy eating. All around a successful day, they gave away all the bags and are already talking about making it an annual event.

In the meantime, the store continued the healthy eating theme with a “fill it fresh” promotion this past weekend, where shoppers payed a flat fee to fill a bag of selected produce.

“This has been one of those promotions that is extremely popular, because it’s not always financially easy to eat healthy,” said Leganza. The store, which offered even more of a discount for purchasing additional bags (1 bag = $25; 2 bags = $40; 4 bags = $55) sold more than 240 bags in two days, a big volume for the small, 18,000-square-foot store.

“When we do these promotions, the produce guys are really hustling,” said Boode.