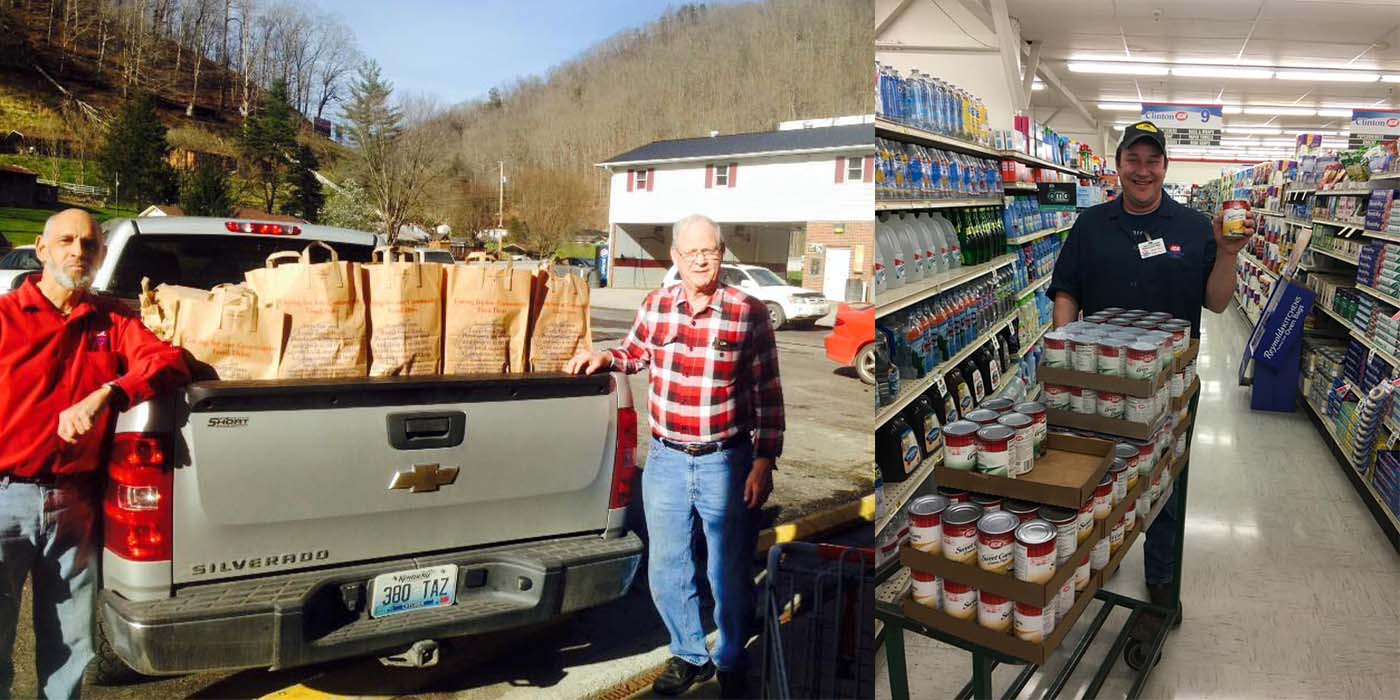 Holidays Bring Time for Giving Back to the Community

The holiday season is an opportunity to give back to the community in the most obvious way possible: through food drives! For many IGA stores, the approach to generating holiday food donations is to make giving as easy as possible for your customers.

As part of its annual food drive, Isom IGA in Isom, KY, loads up all the bags of food to deliver to area food pantries for distribution in the community.

For Isom IGA in Isom, Kentucky, and the Carlie C’s chain of stores in North Carolina, this means working through their distributor (MDI) on food bags, putting together bags of $5 and $10 worth of food items and making them available for customers to purchase and then donate.

“It helps fulfills our mission,” said owner Mack McLamb of Carlie C’s, which works with food pantries and other organizations that serve the homeless and needy in each of their 25 store locations. 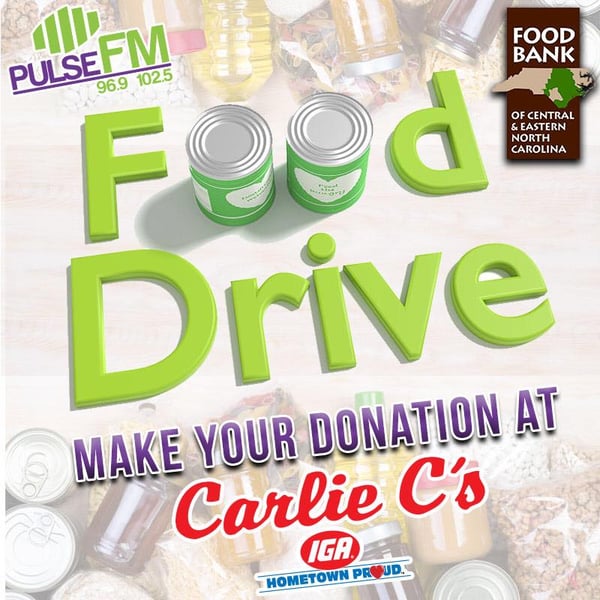 An ad from last year’s food drive from Carlie C’s chain of stores in North Carolina.

In the past five years of doing this program, Isom’s has sold 400-500 bags of food a season, which have been delivered to the local food pantry. This year, however, they are doing a different spin and tailoring the food items for a special program through the community’s elementary school, said Store Owner Gwen Christon. The Backpack Program ensures kids who are food insecure at home have enough to eat over the weekends and holidays, times when they don’t have access to the school cafeteria. The resource center in the school sends these kids home with ready-to-eat foods: Pop-Tarts and breakfast bars, peanut butter crackers, fruit cups, pudding. “It gives them something they don’t need parents to prepare. They can get a spoon and eat it themselves,” said Christon.

Make it a Team Effort

Clinton IGA in Clinton, IN, recently posted a photo to its Facebook account showing Bakery Manager Jason Gossett with 150 cans of vegetables that he donated personally.

No matter what you do, make sure to involve your staff and use social media to spread the word. For example, Clinton IGA in Clinton, Indiana, recently posted a photo to its Facebook account showing Bakery Manager Jason Gossett with 150 cans of vegetables that he donated personally.

Aiming to grow Carlie C’s bag sales from 13,000 to 15,000 this year, McLamb is running a contest to get staff involved. The store that sells the most gets an award and other incentives, including gift cards and a dinner out for the manager of the winning store.

The key to a successful holiday giving program is coordinating with a worthy partner, said McLamb. “It’s all about asking and giving them the opportunity,” he said. 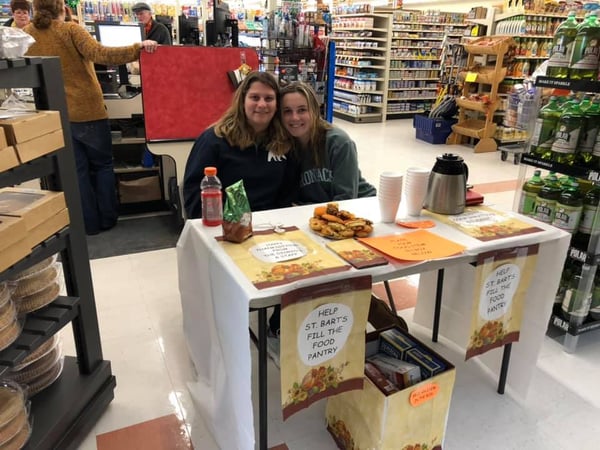 At DiOrio’s Supermarket in Old Forge, N.Y., volunteers from local St. Bartholomew’s church (including the owners’ daughter Mia DiOrio) to do an in-store food drive event.

Even if you don’t have the time and energy to put into doing a drive of your own, look for a partner organization to come in and put on the event for you. At DiOrio’s Supermarket in Old Forge, New York, owners Margaret and Robert DiOrio work with volunteers from a food pantry at local St. Bartholomew’s church to do an in-store food drive event. This year, their daughter, Mia, happened to spearhead the effort as service for her confirmation class, setting up a table in the store and gathering donations.

In Juneau, Alaska, a recent “Caring is Sharing” food drive event done in partnership with Super Bear IGA and Foodland IGA stores brought in more than 25,000 pounds of food, showing that working with others on an event can result in even bigger impact. 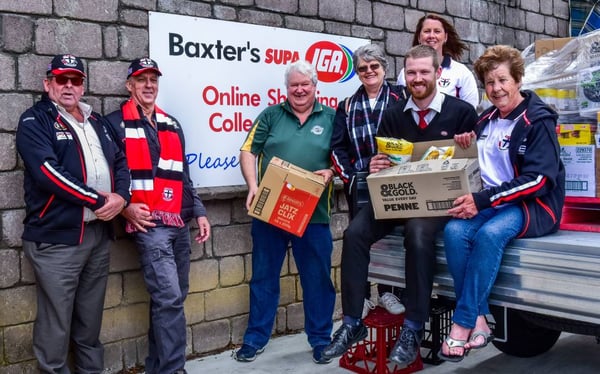 Of course, it’s not just IGA USA retailers who are giving back. Holiday giving is an important part of IGA retailers’ commitment to community all around the world. In the land down under, for example, Baxter’s Supa IGA in Prospect, Australia recently made a donation to a local charity, who in turn used that donation to buy essentials such as sugar, tea, cereal, toilet paper, pasta, and sauce directly from the store. According to one of the organizers, they work with independents such as Baxter’s to support local businesses and because Baxter’s matches the money spent in food donations. 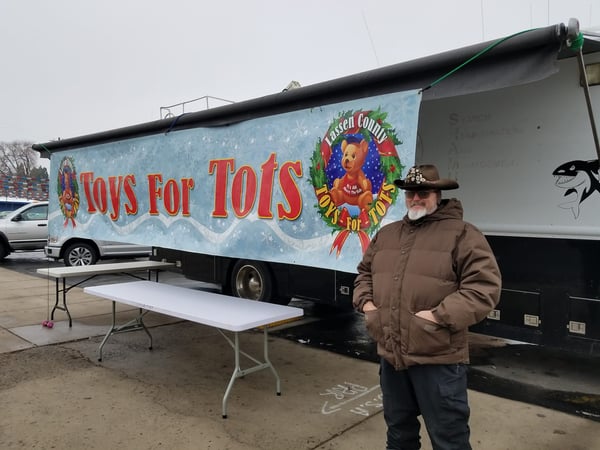 Lassen County (CA) Toys for Tots works with Susanville IGA in Susanville, CA to raise awareness and gather donations for its campaign.

If you’re looking to give back in other ways, consider helping local kids by partnering with the Marine “Toys For Tots” program. This well-established charity, created in 1947, has 812 local Toys for Tots unit coordinators across the United States who volunteer to collect and distribute toys to less fortunate children.

For Susanville IGA in Susanville, California, making sure all the area kids have something to unwrap on Christmas is one of the biggest holiday needs. Every year, they participate in the area Toys for Tots fund drive, with donation jars at the register to collect cash, as well as bins for donated toys, books, and clothing. The organizers also put together food baskets, working with products from the store.

This year the need is especially great, said store owner Anna Stewart. “We usually have 500 kids and this year we’re looking at 900 because other places aren’t getting as much funding as needed,” she said. Any parent or caregiver can fill out an application and a Toys for Tots coordinator makes sure they receive one present specifically from the child’s wish list, as well as books, puzzles, and a stocking with other small goodies, said Stewart. “If the child wants a pink bicycle for Christmas, they’ll have it.” And all of the money raised is spent locally, putting it back in the community, she said. 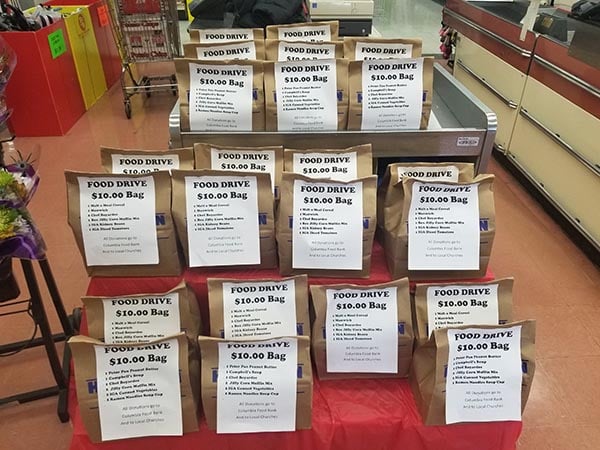 For Rose Schild, owner of Schild’s IGA in Grafton, OH, holiday giving means going all out with running a few different campaigns all at once.

For Rose Schild, owner of Schild’s IGA in Grafton, Ohio, holiday giving means going all out with running a few different campaigns all at once. For many years now, they’ve been collecting donations for an area Toys for Tots drive, selling food bags for local food pantries and event collecting items for soldiers stationed overseas.

“We have a lot of very generous customers,” she said.

IGA Retailers: What to learn more about how you can get involved in Toys for Tots? Visit www.toysfortots.org for more information.