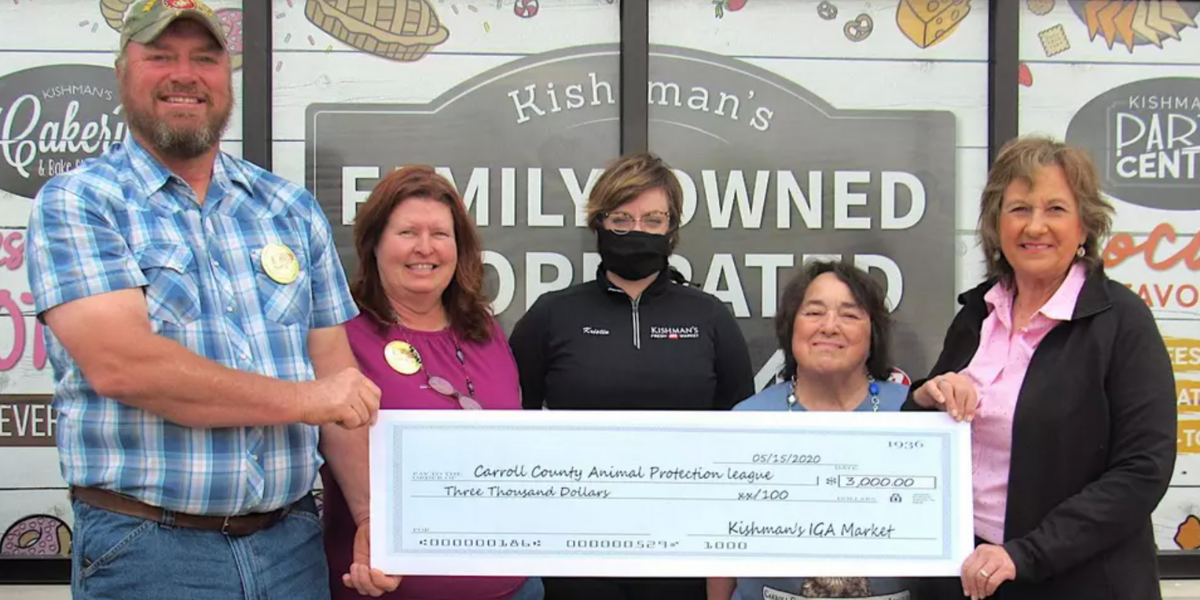 With a strong love of pets in the community of Minerva, Ohio, local retailer Kishman’s IGA recently hosted a fundraiser for the Carroll County Animal Protection League, raising nearly $3,000 in about a month to help them build a no-kill shelter.

To maximize the amount of money raised for the organization, the store offered three types of donations:

According to an article in The Alliance Review, Kishman's IGA sold nearly 1,500 units for the fundraiser in March in the form of the paw prints, pennies for paws, and baked pies, presenting the Animal Protection League with a $3,000 check on May 15.

While the pandemic hit midway through the fundraiser, which ran March 9–April 11, many customers still elected to round up their bills to help out. “We were still able to raise almost $3,000 for them from customers rounding up," says Kristin Meadows of Kishman’s IGA, explaining that tactic made the biggest impact on the fundraiser.

The CCAPL has been trying to build a no-kill animal shelter for the past five years. They have been raising money steadily in that time, investing nearly $700,000 in the shelter's construction, according to their website. "Right now they have the bones of the building and they're working on the doors, which aren't cheap," Meadows says. "They're doing everything right the first time." The CCAPL says they will need at least $600,000 more to finish construction and open the shelter, which they are hoping to do by 2025.

Meadows says that Kishman's IGA plans to host future fundraisers to continue helping the CCAPL. "We are going to work with them again in the future and hope to host some events this summer and fall,” she says. They hope to bring their ice cream social back once the pandemic subsides, sell apple pie and ice cream in the fall, and use the store's food truck to sell hot dogs or something similar, all with proceeds going to the CCAPL. "Our vendors are so supportive in getting us product to sell and donate," Meadows says, adding that their support gives the store many options for fundraising. She encourages other retailers looking to raise money for community groups to check in with their vendors to see if they can help.

"We do a lot of different things with the community," says Sheila Dickens, a Kishman's employee who helped Meadows organize the fundraiser. "This is a no-kill shelter and we wanted to help them out," she says, adding that the store is in a pet-friendly community and they sell a good bit of pet food. Even with the slower end to the fundraiser due to the pandemic, Dickens says, "It started with a bang," and customers were eager to support the shelter.