It was a summer morning in the small community of Lincoln, Illinois when store owner Charlie Lee thought he got another joke call that his Lincoln IGA store was on fire. It was a rude awakening when he saw it was serious this time.

Lee and his team came to find extensive damage throughout the store. The front office was destroyed, plastic bottles melted into the shelves, and windows were busted. And it was no accident.

It was an alleged act of arson, and Lee recalls the suspect waiting inside the store until after closing to try to rob as much as he could. Soon after that, he started setting the place ablaze with the lighter fluid on display.

Although the fire department was down the street, the damage was already done. The silver lining? The suspect was caught that same day.

Charlie Lee inside the new office.

Fortunately, Lincoln IGA has a good insurance company, and the hometown grocer was determined to rebuild. Lee has owned the store for around 30 years. He is sole owner, but he built the store to what it is today with his former business partner Bill Campbell.

The supply chain and cost of goods in 2021 made the rebuilding that much more difficult. However, the community was ready to support the store, which Lee said was “unbelievable.”

It was their way of paying back after the years of contributions from Lincoln IGA.

“Not to blow our own horn—we've been really supportive of the community. We've raised more than $800,000 over the years with fundraisers that we do constantly.”

Local churches, schools, and nonprofits constantly came by to help clean all the damage from the fire. 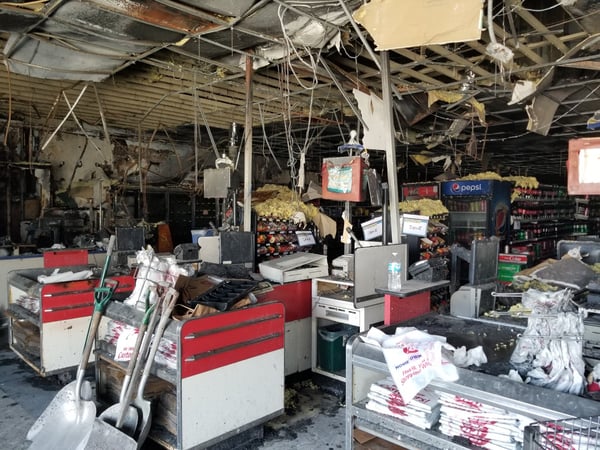 The store after the fire.

He was worried their shopping habits would change in the span of the eight-month closure. When the store reopened March 7, about 50-75 people were waiting in the parking lot.

“We've got all our business back plus some,” Lee said. “Which we're so fortunate because it doesn't always happen that way…but being a hometown store…that's what saved us.”

Lee recalls the store experiencing a fire 22 years ago that closed it down for six months and the community came back and supported them then, too.

The Importance Of Being IGA

The competition in Lee’s area consists of a couple national retailers, so his store stands out with its perishables. “We have a reputation for fresh deli, our fresh produce, our fresh meat…we do about 30-35 percent of our business in fresh meat…that's the only place in town where there's a meat cutter.”

Lee has been in the grocery business ever since he was 15 years old. “People talk about career choice. I never made a choice in my life. I've just showed up to work every day.”

He praised his entire team for the reputation they’ve established and are now able to continue. And his insurance company was able to keep a lot of them on payroll during the store’s closure.

Lee plans on retiring soon and is working on selling Lincoln IGA to his store manager.

When he worked for a small grocer in Sullivan, Illinois, the IGA across the street always outperformed them. As Charlie eventually bought that store, he vowed any future store he owned would also be IGA—he loved the “independent feel” of it.