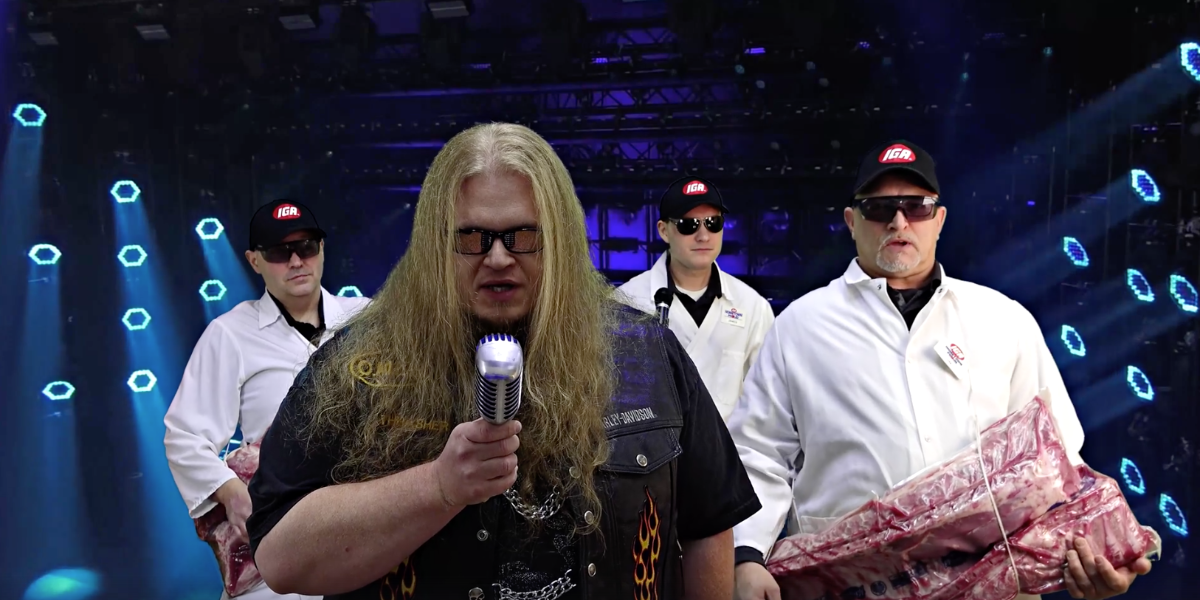 While its certainly not uncommon for IGA employees to be known as proverbial rock stars for their ability to juggle massive responsibilities behind the scenes while putting on a great show for shoppers, employees of the meat department at Rivertown IGA recently took things a step further. The team from the New Richmond, Ohio-based store transformed themselves into virtual rockers for a video to promote their January 23 truckload meat sale.

A video posted to Facebook on January 15 shows the meat cutters in a band “playing” instruments made of meat. Performing a parody of Pink Floyd’s “Another Brick in the Wall,” the song features lyrics like “Hey, vegan! Leave our meats alone!” In the days leading up the sale, the tongue-in-cheek music video hit almost 24,000 views. 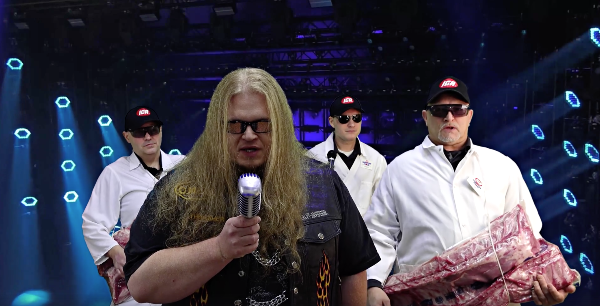 The lead singer in the video is Mike Carr, a local musician who not only filmed and produced the video, but also recorded all the instrument tracks and vocals. It’s a role that comes naturally to Carr, who has achieved success in the music industry as the One Man Electric Band, or OMEB for short. After years of touring, opening for powerhouse bands like Journey, Kiss, and Mötley Crüe, Carr decided to go back to college for marketing and graduated with a PhD last August from University of the Cumberlands.

As luck would have it, Carr’s first consulting gig came about while shopping at Rivertown IGA. He struck up a conversation with owner Ray Dietrich, who was looking for someone to help increase social media engagement and try different ways to grow followers and drive more traffic into the store. After some initial discussions, the two came up with a strategy that includes producing and posting short videos every few weeks and daily deal coupons posted to Facebook. The first video in October promoted the fall truckload meat sale (the sales take place four times a year) and featured meat cutters wearing scary Halloween masks, filmed in black-and-white, vintage horror style.

So far, the work is paying off, says Dietrich. The number of Facebook followers has more than doubled, the daily in-store traffic is improving, and the fall meat sale was one of the best the store has ever held. The January 25 winter meat sale also fared extremely well, bringing in 25 percent higher sales than the event held at the same time in 2019.  What especially appeals to Dietrich is the ability to track engagement, and the big return her's seen on investment.

“It’s a tough market out there for an IGA competing with the likes of Kroger, Walmart, Meijer, Aldi, and others. Print ads get lost in the driveway inside the bag of big store ads. TV and radio ads are not in the budget,” he says. “These videos get a huge response from the locals as we try to entertain them. Our customers love them and talk them up over the back yard fence, barbershop, etc. Which is exactly what any business hopes to achieve with advertising: the buzz!”

According to Dietrich, another benefit to these videos is the sense of team spirit that’s been created with employees, who have fun being part of the action. Take, for example, this video of two longtime staffers racing electric carts. 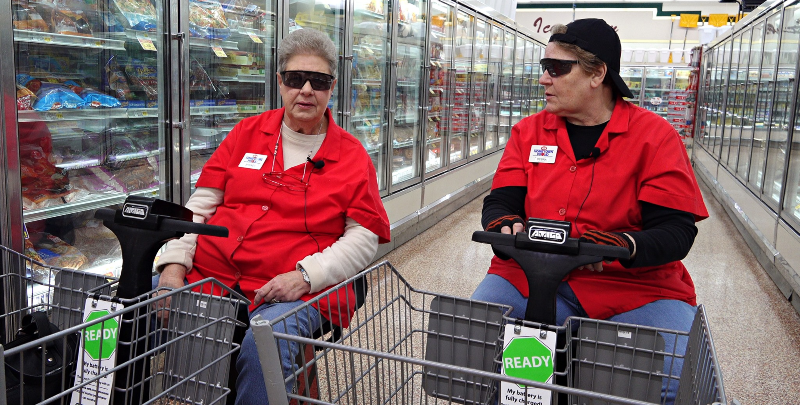 “The team members are taking more of a keen interest in their jobs, more pride in their workplace, and just happy to come to work—I love this. I’m all in on this endeavor,” Dietrich says.

Carr agrees that the videos have helped elevate the store’s image inside and out. “It worked because the videos are fun and totally ridiculous. We’ve transformed the image of the store, so people see that it’s a cool, hip place.”

Many of the videos have been filmed in front of a green screen set up in the break room, are done in a few takes then edited and uploaded by Carr in his home studio. The recent meat sale video was more labor intensive, “like making a real music video,” Carr says. He estimates that he spent about two hours filming it and around 8 hours of production, but the payoff in views and engagement has been worth it.

“We figure these bigger productions have a longer shelf life (no pun intended) and they’ve gotten a lot of attention locally. Several of our other videos have received a lot of attention from our local vendors, like Coca-Cola and this one on Monster Energy Drinks," said Carr, who welcomes any questions about his videos at onemanelectricalband@gmail.com. The next big challenge? “Figuring out how to outdo ourselves.”