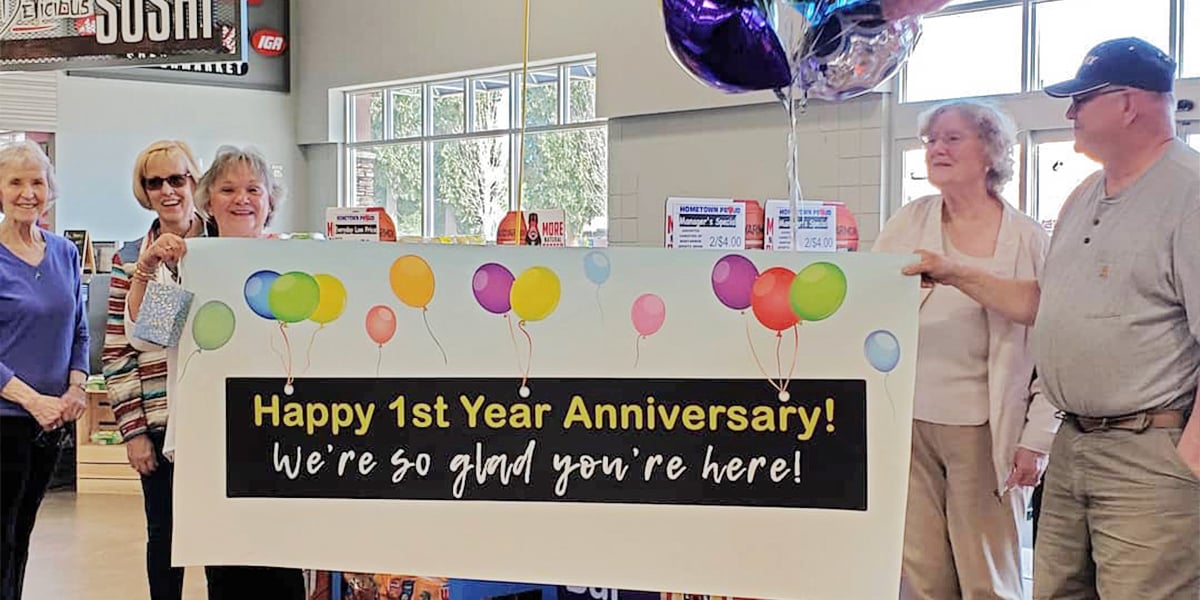 It always feels good to be appreciated, and retailers are used to “sharing the love” through customer appreciation sales and events. But recently in North Albany, Oregon, the tables were turned when customers expressed love of their community IGA. To commemorate their local store’s one year anniversary, a group of citizens surprised staff at North Albany IGA, showing up with balloons and a banner that read, “Happy 1st Year Anniversary! We’re so glad you’re here!”

According to Store Director Charlie McKissick, it’s that kind of support from the community that’s made the store’s first year in business a successful one. Occupying a space of a former grocery store that was vacant for over four years, North Albany IGA fills a specific niche in the community, said McKissick. While the greater Albany area is home to around 50,000 people and a handful of larger supermarkets like Safeway and Fred Meyer, North Albany is separated by the Willamette River and the community of more than 7,000 was without its own grocery store. Even though a four-lane bridge crosses the river, for some it feels like extra work to make the trip. “It’s a psychological barrier for people,” said McKissick. Which explains why the new IGA—which also houses an ACE Hardware and liquor store under the same roof—was so well received.

On Saturday, June 1, the store took its turn in giving back to its loyal customers with an anniversary celebration. Held under a big tent in the store parking lot, the event consisted of raffle prizes, including a $250 and $500 gift card giveaway, BBQ demos and vendors giving away samples, as well as hot dogs, cake, and ice cream.

Now that there’s a full a year under his belt, McKissick, who previously worked for Myers Group stores in Washington State, has already been fine-tuning the store. “It’s a little different demographic here and we’ve learned what works and what doesn’t,” he said. “We’ve contracted and expanded on 32 different places in the center store.” One surprise was the bulk section built into the original footprint of the store, which seemed like it would be a hit but was noticeably under performing. So staff ended up taking most of it out, keeping the nut grinders for making nut butters and the bulk spices.

An area of strength for the store is anything that’s produced in Oregon, marked with a “Made in Oregon” logo. In addition to local products, there are quite a few mainstream staples that are made in-state: Bob’s Red Mill flours, Tillamook cheese, and Boyd’s Coffee, to name a few. “There’s definitely a lot of support for locally-sourced products,” said McKissick.

Next on McKissick’s immediate to-do list: hire additional staff. “When we opened, we had more help than we needed, and then we settled in, and lost some employees through attrition and got to a point where we were well balanced. But in the past six to eight weeks we’ve been growing and are ready to take on some new people,” he said.