Rodhe’s IGA Plans to Cut Plastic Bag Use in Half

Across the U.S., communities are taking steps to cut back on single-use plastic bags by passing ordinances regarding the use of those bags, typically by mandating stores charge a per-bag fee or banning them outright. According to Forbes, at least 349 cities, counties, and states have enacted legislation to ban or tax plastic bag use.

Rodhe’s IGA Marketplace in Millersburg, Ohio decided to take the initiative on their own, aiming to give out half as many plastic bags at check-out this year. They recently teamed up with the local park district on a campaign to encourage people to bring their own bags when grocery shopping, and help the store meet its goal. 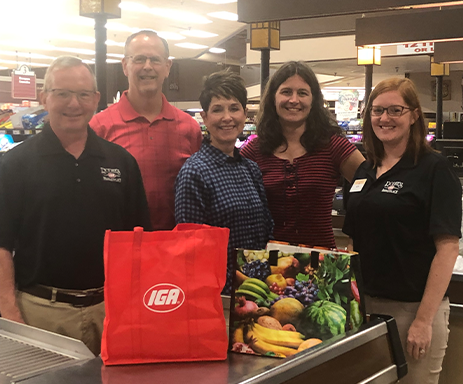 According to a news report, the store and park district partnered to combat plastic bag litter on area trails and reduce the bags’ environmental impact. Rodhe’s alone gives out around 720,000 plastic bags each year, so cutting that number in half is a sizable start. Based on the feedback they’ve received since the local news published the story, Haley feels confident they will meet their goal.

To help, park district employees and community volunteers were on hand during the store’s September Customer Appreciation Week to distribute the reusable bags and give out information about the importance of doing right by the environment.

“They were on the same boat to get community involvement, get people to understand how bad the plastic problem is,” said Haley.

With lots of press for Rodhe’s in the last month—the store celebrated their 85th anniversary with daily giveaways and events, and also marked the sale of a $5 million scratch off lottery ticket with an in-store celebration—it’s the perfect time to educate shoppers and the community on the need to help the planet and do away with plastic bags.