As third generation grocers, the Young family has a long history of dedication to the communities they serve. Kevin Young’s grandfather opened the family’s first grocery store in Lockeford, California in 1953, and it was in that same store that Kevin would begin his career sorting bottles and bagging groceries when he turned eight.

By the time he was 12, Young was put on the payroll as a cashier, and worked in most of the departments of the store thereafter. At 23, he took over operations and began expanding the business. He purchased the second store in Pioneer, California, in February 1999, and the third store in Copperopolis, California, in January 2002, planning to carry on his family legacy of community support.

In the more than 20 years since Young took over the family business, he’s made giving back—particularly to local schools—a huge priority for his stores. And it’s paid off in spades, for the school, the kids, and the stores’ reputations.

Young’s Payless IGA Steak and Shrimp Fest benefiting the local Copperopolis Parent Teacher Association (PTA) has become one of the local community’s most anticipated annual fundraising events. This year’s event—held Saturday, November 2—was particularly memorable for a variety of reasons, starting with the record-breaking earnings for the PTA.

The other amazing thing about this year’s event is that it even took place at all, as the community was without electricity earlier in the week. Copperopolis and the other two Young’s Payless IGA store locations were affected by the widespread power outages enacted to prevent additional forest fires that have been breaking out across California.

“The power came on Tuesday night or Wednesday morning for most residents, a few days in advance of Friday’s event. We thought it might hurt attendance but obviously it didn’t,” Young said. Regardless, it was the capstone to a crazy week for many attendees.

Young attributes the Steak and Shrimp Fest’s success to the collaboration with its event partners. IGA donates all the food and supplies needed for the meal and contributes staff to run the kitchen and serve. Local Lions Club members help out with the cooking. PTA volunteers organize the event’s silent auction and raffle, and help staff the event. Kids at the school help sell tickets, which cost $40, and are also available at the store. With minimal expenses, the organizers can maximize the proceeds for the PTA.

Now in its 17th year, the Steak and Shrimp Fest sells out quickly. Held at a local event hall with a maximum capacity of 225, the organizers have to limit the number of tickets sold. “We could easily sell 300 or 400 but we don’t have a venue that large in this town,” said Young.

The event consists of a steak and shrimp dinner, with salad, roll, and beverage. There’s a cash bar, raffle, dessert auction, and silent auction. 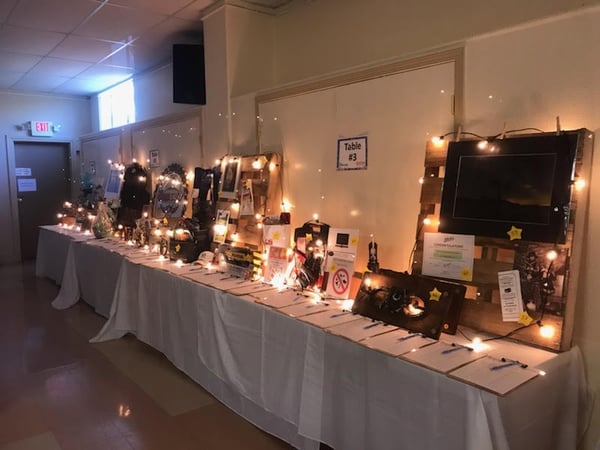 This fundraiser has been so successful that Young’s IGA started putting on a similar event in its Pioneer location. The annual “Night Out for Pioneer” includes a dinner of ribs, pasta, veggies, and a salad, followed by music, dancing, and an auction, and is held on a smaller scale, usually raising around $13K-$14K for the local PTA.

In Lockeford, where Young’s IGA has a third store, they host a golf tournament for the PTA each year, but they might switch to running a dinner there instead, Young said.

The way the program usually works is C&S sells the bags to the store at minimum cost and then retailers have customers buy them to donate to the school or a local nonprofit for distribution. Instead of being the middleman, Young found out how many kids attend the local elementary school and bought a backpack filled with nonperishable, IGA-branded food for each one of them. He gave out the bags during a school assembly, accompanied by the IGA tiger mascot.