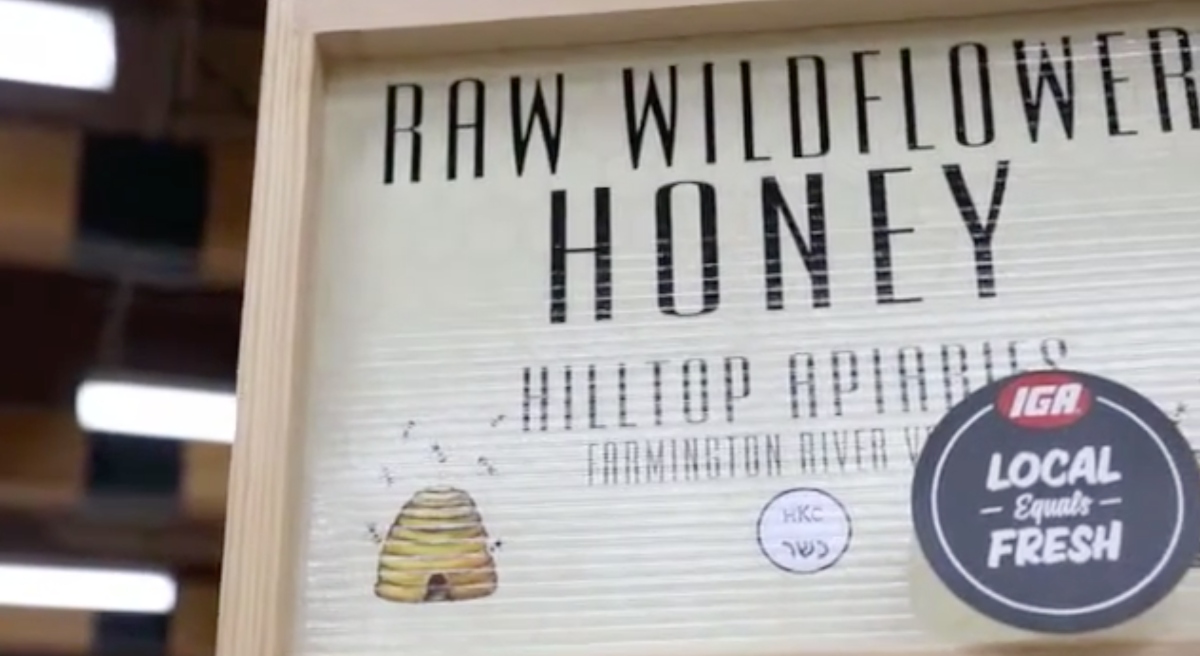 Independent grocery stores provide many benefits to shoppers that large chain stores can’t: local foods and products, fresh meat cut in-store, personalized service, and community support to name a few. But often the hardest place for independents to compete is in promotions, both in local marketing and national promotions from large brands.

IGA's National Digital Ad changed all of that by leveraging the brand’s large number of independent retailer members to collectively appeal to big brands for national promotions that compete with the large grocery chains. And now in its latest phase—complete with a dynamic, media-rich layout and new technology that makes it possible for retailers to include their local ads—the digital ad is making it easier than ever for IGA retailers to connect with existing and new shoppers alike.

“It’s great!” says David Weber, co-owner of Martin’s Market Fresh in Cashmere, Washington. “It’s really clean and user-friendly.” Martin’s Store Manager Kris Reinhart echoes the praise. “It’s eye appealing and puts our national digital items out there on the top of the ad and our local items right below it in nice, beautiful, crisp pictures. The recipes give great ideas and the shopping list makes it easy.”

That clean design and user-friendly technology is no small feat for the grocery industry. "The transition from print to digital has been clumsy in grocery," IGA CEO John Ross says. "We went from print to static digital ads, and both are lame products to show off fun stuff. The way we talk about food and have for 30 years is with little boxes and prices. Our National Digital Ad 2.0 uses rich media to engage the shoppers, and be as customized to our local marketplace as our stores are."

Watch the above video to learn more about the National Digital Ad's newest features.

While competing on a national level with large chains is a huge win for our retailers and benefits our shoppers’ wallets, that local customization is key to standing out in your marketplace—especially now.

"Before the pandemic, the word 'local' was growing—and now it’s even bigger," Ross says. "The great irony is that independents don’t use that word enough. Our research is showing us that shoppers believe their local independent grocer is taking safety and quality more seriously than the big chains during the pandemic, and that creates a huge opportunity for independents—but only if they're getting their local brand distinction out there." Ross continues, "Independent retailers always assume shoppers know they're local, but the fact is, that's not always the case. The ad and all of IGA’s other programs are part of a bigger brand strategy that helps the retailer tell that local story."

Thanks to the fully integrated local distribution system built into IGA’s National Digital Ad, retailers can reach more potential customers in their areas and share their local offerings directly with them. “IGA has developed a national program with hyper-local content, giving each and every store access to the most advanced platform available,” says Adam Zimmerman of Design House, the third-party vendor that designed the NDA’s new platform. “This means that your store can reach a larger, more targeted audience in the medium they prefer—their phone.”

To ensure every IGA retailer can take advantage of this technology, IGA is buying local ads that target the locations of IGA stores so that these national offers are seen by local shoppers—all at no cost to the stores, the ad groups, or the wholesalers.

The possibilities for showcasing local content are vast, allowing retailers to get creative and leverage various types of content for shoppers to consume. For example, during September’s National Honey Month, the ad for Geissler’s Supermarkets (with seven locations in Connecticut and Massachusetts) featured a video of Hilltop Apiaries, local beekeeping and honey producers whose products are sold at Geissler’s.

Bob Rybick, CEO of Geissler’s Supermarkets, says it’s easy for retailers to add local content and customize the ad to feature local offers. “We’ll intermingle the store creative content—like videos we use on our Facebook page—with the offer,” he says, adding that they can arrange the positioning in the ad to ensure everything aligns. “We’ll put our local corn video at the top of the page with the corn offer so they appear next to each other right after the national offer.”

To get that content into the ad, stores simply upload a spreadsheet of their local offers and content links to a portal, then the offers will appear in your NDA. See how the ad for Okanogan Market in Okanogan, Washington features Local Equals Fresh labels on photos of their local offerings, like St. Helen’s beef or local Fuji apples. 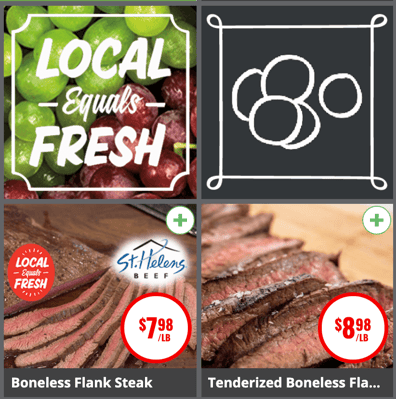 Stay tuned to The IGA Minute in the coming weeks for a tutorial on how to upload your local offers to the portal, and check out this video to learn more about the National Digital Ad 2.0.

When it comes time to advertise their local offerings, IGA retailers might wonder why they can't continue to do so in their weekly print inserts or circulars. Print may still be a fair option for some stores, but Ross is confident that stores will quickly see the importance of digital on their bottom line, especially with measurable results during a chaotic time.

"COVID is profoundly impacting the media around our stores, accelerating the demise of local print newspaper and the adoption of digital media," Ross says. "In a time of crisis, you need up-to-date information, and that means online is the most reliable option. When COVID is a distant memory, they won’t go back to newspapers. They’ve learned how to use the internet to find deals, recipes, and information, and that will be a sustained behavior."

Reinhart agrees. “The world is going digital, so if you’re going to cut back on or eliminate print ads, [the National Digital Ad] can save you money,” says Reinhart. Martin’s is part of a 17-store pilot group who started testing the new ad design a few months ago. Weber says they reduced their print advertising in anticipation of the National Digital Ad 2.0, removing the ad insert in the local paper and instead using a section’s back page to feature a smaller portion of their circular. “We still had some paper presence, but it saved us a lot of money,” Weber says. Since they didn’t receive any feedback from shoppers after removing the insert, he assumes people weren’t as reliant on the physical ads as he thought. “We don’t want to spend more money on advertising,” he says. “And from a global perspective, you want to be done with paper and cut that piece out as much as you can.”

With the digital ad, Weber and other retailers can reallocate the store’s advertising budget toward geo-targeting the ad to shoppers in a predetermined radius of the store and gaining more impressions. While independent retailers would often be priced out of this technology, IGA has leveraged its power of scale to make it affordable. "Because IGA has negotiated targeted ad rates on a national level, we can offer our retailers the same advertising deal we're getting at about a third of the cost of standard pricing. And the same insights about where the best investment is," Ross explains.

The technology behind the digital ad makes it easy to stretch—and track—your ad dollars. “We aren’t just creating a digital circular and sticking it on your website—we’re pushing it out to your community: people who shop your store and people who shop your competitors’ stores,” Zimmerman says. “This traffic driving feature allows the IGA NDA to function as the most powerful arm in your marketing arsenal. The fact that we distribute the ad allows it to work alongside the print circular—or if you’d prefer—completely replace your print circular.”

The digital medium allows IGA to track and measure the results, which can’t be done with print circulars. “There are detailed analytics, called visitation analytics, that allow us to track the user,” Zimmerman says. “From the ad to the store visit, we can see what is working and what isn’t. And the system also gets smarter over time, using learning algorithms to deliver ads to high-intent shoppers."

The Results So Far

Thanks to the analytics, we can immediately measure the impact the National Digital Ad 2.0 is having on IGA retailers. About four months of analytics from the pilot group of 17 stores have yielded stellar results:

Those are great numbers, but what do they mean for IGA retailers? According to Weber, it’s time to leverage the National Digital Ad 2.0 to connect with shoppers who are more engaged with our stores than ever. “This is a very exciting time to go digital because people are cooking and baking at home,” he says, noting that the recipes in the ad provide great ideas for shoppers.

“We normally would be pushing it more in-store to educate shoppers, but with COVID, we haven’t yet,” Weber says. Still, they’ve put the shelf signs out that feature national offers and link to the store’s ad QR code, and are starting to advertise the ad with stanchion signage throughout the store. And with the geotracking technology built into the ad's platform, stores don't need to do any extra work to educate shoppers—the ad finds shoppers online where they already are, popping up in in-app ads like on a weather app, or on their most-visited website.

So what will shoppers find when they click on the National Digital Ad 2.0? A fun, engaging online experience with valuable time-savers, like:

And while the interface is designed to keep viewers engaged and turn them into loyal shoppers, IGA retailers reap rewards beyond an increase in shoppers and basket size, including:

The National Digital Ad 2.0 is already accessible to your shoppers and working to increase your sales, but you can leverage the advanced features to really dial in on new shoppers by adding your local content and boosting local distribution with a small, weekly media buy that takes advantage of the reduced pricing set for IGA.

"By default, your digital circular will soon carry your logo, your contact info, and the national offers created by IGA," IGA CEO John Ross says. "Even if you do nothing else, that national content and the targeted local media buy IGA is making on your behalf is driving traffic to your store right now. But the best results are going to come to those retailers who integrate their local ad into the National Digital Ad."

Ready to make the most of your National Digital Ad 2.0? Contact Sarah Rivers, IGA’s senior manager of program development, for a consultation.

Get the detailed breakdown of how the National Digital Ad 2.0 works here.

Everything You Need to Know about IGA Recipe Club