There's no denying that national retailers are often easier to work with than regional or local chains. After all, with a single call a brand can create a national promotion with a retailer like a Safeway or a Walmart, and know their selling message will be communicated to millions of shoppers nationwide.

In the absence of that kind of streamlined process, independents struggle to get the same kind of recognition from brands, which is exactly why IGA in 2018 launched its first-ever National Digital Ad.

"Unlike an unaffiliated independent retailer, IGA's national brand presence allows us to behave exactly like a large national chain, and the National Digital Ad is the modern marketing vehicle that has allowed us to connect to brands for national shopper marketing investments," IGA CEO John Ross says.

The benefit is clear: In 2019 alone IGA harnessed millions of dollars of incremental savings for IGA shoppers, and connected IGA retailers with millions of shoppers using the digital marketing platform.

And yet, as is the case with any first version software, that first full year of working with retailers and manufacturers through the National Digital Ad revealed a whole range of ideas that could make the ad even more successful.

Enter IGA's National Digital Ad 2.0, a new and improved version that was quietly released earlier this summer with the goal of creating a more dynamic, media-rich ad that is simpler, easier, and more engaging for shoppers, manufacturers, and IGA retailers alike.

Roughly three months since the first ad launched in the 2.0 platform, the new ad is already delivering on its promise to engage more shoppers. Since May 31, National Digital Ad 2.0 has served up 7,852,704 impressions, an increase of 75 percent over the same period last year, bolstered by a combination of a new national media buy (responsible for roughly 40 percent of the increase) and local ad impressions resulting from a pilot group of 17 stores who were the first to upload their weekly circulars to National Digital AD 2.0 (responsible for the remaining 35 percent).

That's just the tip of the iceberg when you consider the possibilities National Digital Ad 2.0 presents for drawing shoppers in as more ad groups and retailers ramp up the new platform's regional and local offers and the media buy expands, Ross says.

"The biggest drawback of the first generation of the National Digital Ad was related to the local ad," he says. "It was always our intent to marry our national offers with local content, but our functionality was limited, and uploading local content was clumsy and required long lead-times. With this new generation, we've made it seamless and simple to create a hyper-local experience, from the local and regional offers to the retailer's branding and content. Add to that cool features that really engage the shopper and a stronger media buy more focused on the local level, and our impressions are growing exponentially with every retailer who comes on board with their local ad."

Want to know more about how the IGA National Digital Ad 2.0 can integrate with your local ad to draw shoppers into your store? Watch this quick video for a full overview, and read on for more details.

Ready to learn more? Click below to book your consultation with IGA's Sarah Rivers.

"It’s a lot more fun and a lot more interesting to shop a store that is delivering you information and confidence about the choices you make,” says Ross. Which is why the new National Digital Ad isn’t only about offers—it’s about creating an online space where shoppers can find engaging content that makes shopping easier and more enjoyable, from recipes that allow you to add the ingredients directly to your shopping list in one click to national brand contests from shopper favorites like OREO.

Like a weekly print circular, the ad features offers through photos and text in a grid-like format. Unlike print, it uses all the benefits of digital to captivate the shopper: a video of a dog rushing to their food dish runs under a Purina offer; a photo of a steak salad invites the viewer to click for the recipe, with ingredients that can be automatically added to their digital shopping list.

When using your digital circular, shoppers can:

Most importantly, the digital circular is easy to use and intuitive. “It makes savings available on your mobile phone 24/7, and also makes it easy to share those savings with friends and family members with a click of a button,” says Sarah Rivers, IGA’s senior manager of program development.

So National Digital Ad 2.0 offers a better experience for shoppers, but how do we ensure they know about it? One of the biggest improvements in this new generation of the ad is the media buy that helps get more eyes on your ad.

"Instead of investing in a single network—where shoppers have to sift through competitor ads to find yours—IGA is now buying ads locally targeting IGA stores for national offers at no cost to the store, the ad group, or the wholesaler," Ross says of IGA's media investment for National Digital Ad 2.0. "And because it's a local investment, shoppers in your area will find your ad in the online spaces they visit most, like in their favorite apps, on their news sites, and where they're shopping online. That means less waste in markets with no IGA stores and more impressions in local markets."

The process begins when Design House, the digital marketing agency partnering with IGA for the National Digital Ad, creates a geofence around your store, tracking mobile phone locations and targeting adults that shop both your store and your competitors’ stores. "That's a hugely important part of the program," says Design House’s Creative Director Adam Zimmerman. "Not only are we focused on increasing brand loyalty within your customer base, we’re also focused on capturing your competitors' customers."

From there, we create targeted digital ads that appear on websites and apps frequented by existing and potential shoppers in your area. Then, the entire ecosystem from beginning to end is tracked by an analytical system that allows you to measure effectiveness of the ads and see which offers and content resonate the most with shoppers. “There are detailed analytics, called visitation analytics, that allow us to track the user,” says Zimmerman, who led the platform design. “From the ad to the store visit, we can see what is working and what isn’t. And the system also gets smarter over time, using learning algorithms to deliver ads to high-intent shoppers."

Best of all, stores have the option to upload all of their weekly ad items to this interactive digital platform and amplifying their media buy—all at a cost far less than print.

The power of scale allows IGA’s independent retailers to leverage this advanced technology that would normally only be afforded to large chains and conglomerates. It also continues to provide IGA retailers with access to national brand offers, like those from Red Oval manufacturing partners Anheuser-Busch, Coca-Cola, Mondelēz, Unilever, and more, and the valuable insights that come along with those partnerships.

For example, Anheuser-Busch recently ran a National Digital Ad offer for Bud Light Seltzer through August 25 for shoppers to save up to $5.00  on the purchase of any Bud Light Seltzer 12-pack or 24-pack and fresh or frozen fruit. While initially it may seem like an odd offer pairing, data from Numerator Insights Grocery shows that when Bud Light Seltzer and fruit are in the same basket, the basket is worth $135, bringing an additional $63.00 per purchase. Thanks to Anheuser-Busch's international reach and ability to unlock those key shopper insights, IGA's independent retailers benefit from bigger baskets just by making the National Digital Ad available to their shoppers.

"We've learned so much over the past couple of years when it comes to building offers," IGA Senior Director of Red Oval Partnerships Heidi Huff says. "Now we're making ad decisions based on the data, which means there's dramatically more profit potential with each offer we create."

While those national offers are crucial for helping IGA's independent retailers gain a more even playing field with national chains, combining those offers with regional and local offers is really where the magic happens.

National Digital Ad 2.0 integrates IGA-provided national offers, ad group content, and the retailer's local ad, meaning it's a one-stop-shop for every deal available for your store. The intuitive back-end design makes adding those local offers—and local specific content that tells the story of your store—fast, easy, and inexpensive.

Every IGA USA retailer currently has access to National Digital Ad 2.0 as part of their membership—in fact, it's already working for you to increase sales. Visit IGA.com/savings to search for your ad by location.

"By default, your digital circular will soon carry your logo, your contact info, and the national offers created by IGA,"  Ross says. "Even if you do nothing else, that national content and the targeted local media buy IGA is making on your behalf is driving traffic to your store right now. But the best results are going to come to those retailers who integrate their local ad into the National Digital Ad."

The next step is to add your local content and boost your local distribution with a small, weekly media buy that takes advantage of the reduced pricing set for IGA. "This kind of economy of scale is one of the real advantages of being an IGA retailer," Ross says. "Because IGA has negotiated targeted ad rates on a national level, we can offer our retailers the same advertising deal we're getting at about a third of the cost of standard pricing. And the same insights about where the best investment is."

According to Ross, Design House's geotracking provides valuable insights about where your ad dollars should go. "We so often see retailers who are blanketing the area with print ads, when the data shows there's a bad ROI," he says. "Now we can work with the retailer to determine where there's waste in the ad buy, and redeploy that waste to digital to save money and get more effective advertising. It’s an elegant solution that takes all the myth and story telling out of advertising, gets more eyes on your local ad, and helps you grow sales."

Once the advertising buy has been made, there's only a matter of uploading the content, which is literally as simple as "uploading a five column spreadsheet of your local offers," Rivers says. "If the retailer wants to take it a step further, they can add to that spread sheet video links, images, and other content that shows the uniqueness of the store."

IGA's pilot group of 17 retailers using National Digital Ad 2.0 to broadcast their local ad is up and running and going well, with retailers like Geissler's, a seven store group in the Northeast, taking full advantage of the customization options available through the ad.  Check out the video below, where Geissler’s Supermarkets’ CEO Robert Rybick promotes local corn from Bordua Farms.

Want to see Geissler's ad in action? Click here to view this week's ad. Want to get an idea of what your own ad could look like with your integrated local content ? Open the camera on your phone and hover over the QR code below to go directly to a demo ad. 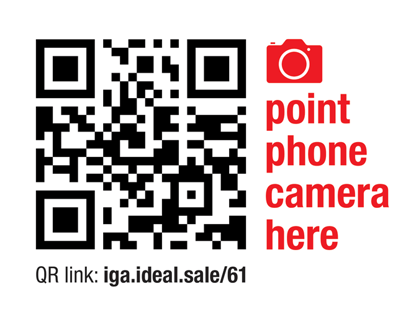 Ready to learn more? Click below to book your consultation with IGA's Sarah Rivers.