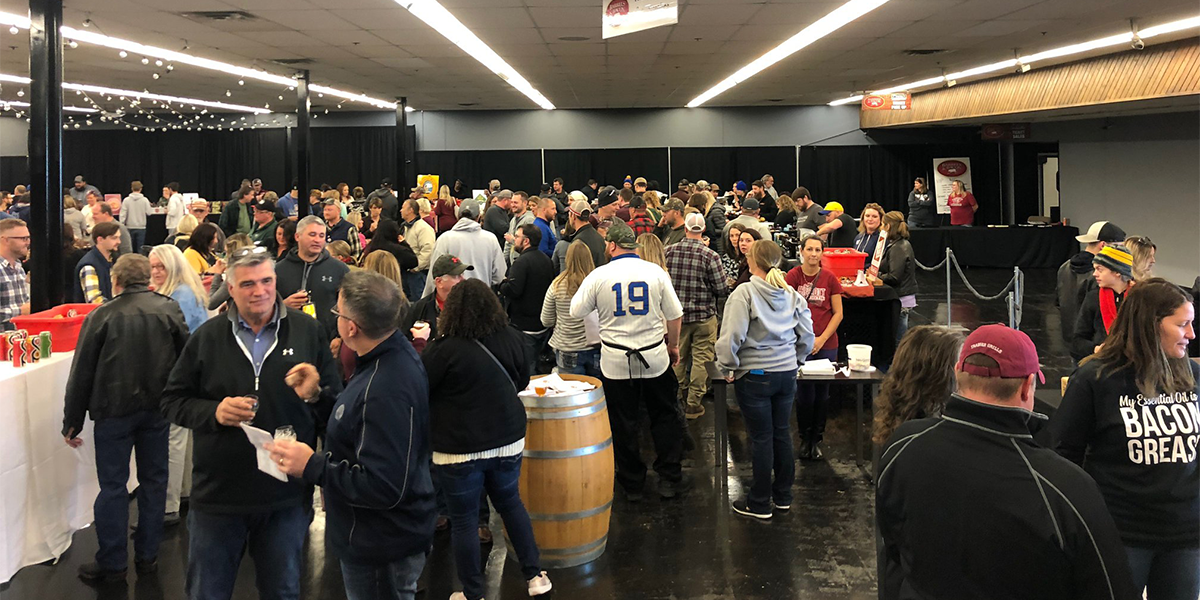 How do you celebrate the last remaining fall days in Wisconsin before the brutally cold, snowy winter sets in? The team at Ptacek’s has just the trick for warming the hearts and bodies of their Prescott community: the Barrels and Bacon event. Now in its sixth year, the annual beer and bacon sampling event has a loyal following, with this year’s event attendance hitting a high of more than 300 people.

“It gives people something to do before everyone hits hibernation mode,” said Store Manager Pat Ptacek, who organizes Barrels and Bacon, along with the store’s liquor manager and a few other key staff people.

According to Ptacek, he originally dreamed up the event to give people a chance to identify which beers they like from among the store’s rapidly expanding craft beer selection. “With microbrew six packs running as much as $12, it can be disappointing for someone who tries something new and doesn’t like it, and are then stuck with five other bottles to drink,” he said. And it’s paying off, with overall department sales up 13 percent during the month of the October event, and more than 50 percent overall since event began in October of 2013.

At Barrels and Bacon, participants pay $30 for a three-hour session, where they can try unlimited samples from a selection of more than 150 different beers and a range of flavored bacon, plus receive a souvenir tasting glass. A VIP pass includes all of that plus early entry and a rib sampler.

For the beers, organizers make sure there’s a great local representation, as well as nationally known brands like Sam Adams and Dogfish Head Brewery. Many of the breweries send their own representatives to pour the samples and talk about the beer. “It’s in their best interest to send people with a lot of product knowledge,” Ptacek said.

As part of the occasion, a rib cookoff takes place outside in the parking lot, with 24 competitors vying for a $1,000 grand prize. The cookoff runs before the beer sampling begins and costs $10 for five samples and a People’s Choice voting card.

“The BBQ is a thing that’s growing all by itself,” Ptacek said. In addition to a People’s Choice Award, the grand prize is chosen in a judges’ blind taste test. This year, Ptacek’s has partnered with Tyson and its Chairman’s Reserve brand, who not only helped with the judging but also sent members of their marketing team to document the day.

According to Ptacek, the BBQ competition is growing and attracting new talent, with 10 new participants this year and a different blind winner each year they’ve held the cookoff.

“It’s quality from top to bottom,” he said.

Since Ptacek’s IGA owns the event center, they are able to organize Barrels and Bacon without a lot of out-of-pocket costs, which enables them to donate some of the profits to a local cause.

This year they gave $1,000 to the Fairy Wonderland Park, a whimsical, fairy-themed kids park being developed that will also serve as a memorial to three local children who passed away in recent years. This donation is part of Ptacek’s long-standing tradition of giving back. The store recently rounded up IGA-branded food donations for Sharing and Caring Hands, a Twin Cities-based nonprofit that helps the poor.

As for Barrels and Bacon, Ptacek’s one regret is that he’s too busy to partake too much himself. “It’s a day that starts at 5 a.m. and we don’t get done until 8 p.m., but it’s a good, good day.”