Employee of the Month |
2 min read

Within minutes of Cornerstone IGA posting a photo to Facebook of the September 2019 IGA Employee of the Month award winner, the congratulations were pouring in, receiving almost 100 likes, five shares, and more than 20 comments in the first hour, with messages such as, “Congratulations Pappy! You have always been this type of person. Well deserved I'm sure!!” 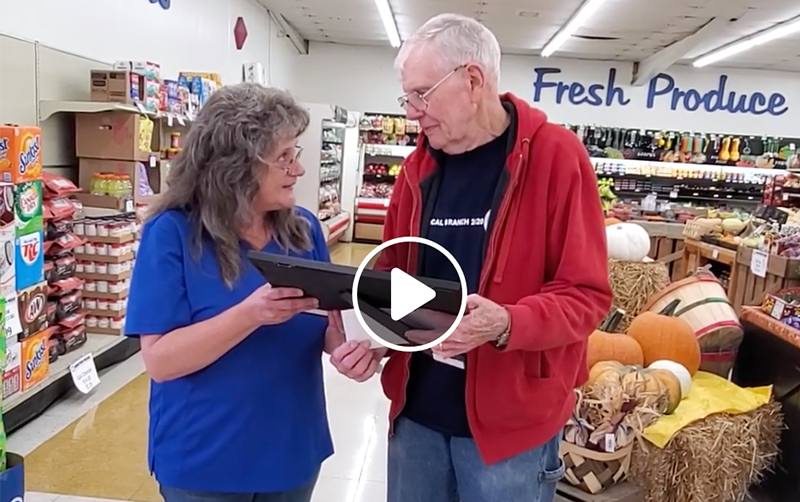 It’s a testament to how much he is respected and admired in the small town of Daniels and its surrounding communities in Raleigh County, located in the southern part of West Virginia.

Jennifer Vest, Cornerstore IGA receiving clerk, nominated Pappy for the award. We chatted with her to find out more.

Q: How long has Pappy worked at the store?

He retired from work as a coal miner and came to work with us part-time in 2007 in our stock crew. He’s an essential member of our team, and everyone loves Pappy.

Q: What makes him such a stand-out employee?

His strong work ethic. Pappy is by far our hardest-working employee. He’s going to be 77 this year and he can outwork anybody in the store. And also he’s very caring. He’s always asking everyone how they are doing, asks about people’s family. He’s everybody’s Pappy!

Q: Why did you nominate him?

Here’s an example of how Pappy goes above and beyond his call of duty: Recently, our freezers went out. We were making calls and asking employees who were not already working that day to come in and help, and couldn’t get people in here. Pappy happened to stop by to do his grocery shopping and when he heard about the problem, immediately pitched in to work. Turned out, he was the ONLY employee to show up to help and he never stopped the entire day until all freezers were emptied and inventoried. It’s moments like that that show why he deserves some recognition.

Q: How did you present him with the award?

We kept it a secret from him for two weeks. The morning we were ready to surprise him with he ended up finishing up his work early, so we had to lie to him to get him to stay later! We told him there were some important people coming to the store and we had to get it looking nice, so of course he pitched in on the cleaning.

Then we had a breakfast for the employees, some biscuits and gravy, sausage, all the basics, still not quite telling him what it was all about, until the local news crew showed up and we then were able to present him with the award. Store Manager Jackie Phillips was the one who gave it to him and it was a sweet moment. Those two are very tight, and look out for each other.

He was absolutely surprised, but of course he said he thought everyone else deserved it more!

It was great to surprise him and honor him in this way.

See the local news coverage and watch the video below.

Previous Story
← Give Your Shoppers the Discounts they Want!
Next Story
Key Takeaways from the West Coast Int’l Supermarket Management Class →