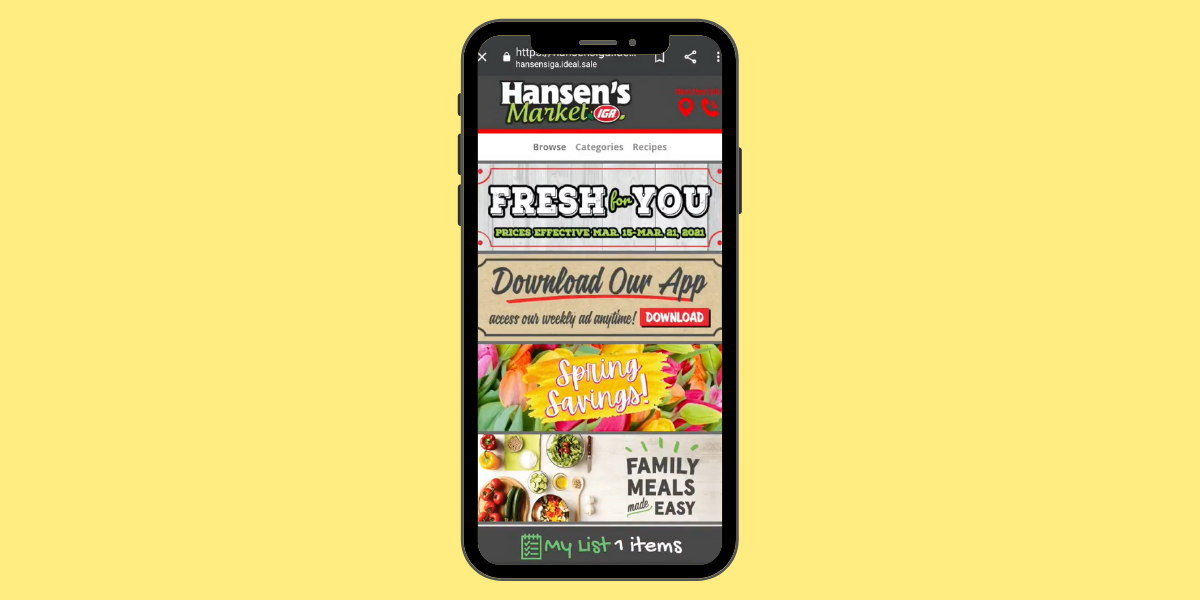 Looking for a way to keep the sales you gained during the pandemic and level the playing field against the chains? IGA's National Digital Ad 2.0—which is helping IGA retailers across the country get more eyes on their ad, more shoppers in their stores, and more dollars to their bottom line—is an important first step, says IGA CEO John Ross.

"While there's no magic bullet that will ensure you hold on to the sales increases you saw in 2020 as we begin to emerge from the pandemic in 2021, there are certainly things you can do to move the dial in the right direction," Ross says. "Any way you can reinvest in your business is going to help, but engaging with the National Digital Ad 2.0 is probably the single most effective thing an IGA retailer can do right now. By combining your local content with the national offers in the digital ad, you're going to see sales increases."

Why the urgency? "IGA China is about three months ahead of us in the pandemic cycle and they're beginning to see some pretty serious sales declines," Ross says. "We're hearing from IGA retailers here in the U.S. that many of them dropped their print ads last year and haven't begun to advertise again. When we start seeing declines here and retailers look again to advertising to stop the bleeding, we don't want retailers to jump back into print. We want them to have the cheaper, more modern, and much more effective solution we're offering through the National Digital Ad so they're getting more bang for their advertising buck, and more sales because of it."

But what about retailers who never stopped their print ad? Ross says it's time for those retailers to rethink their strategy as well. "In most markets, print has fallen to such a low readership, it likely makes financial sense to give it up and move entirely to digital," Ross says. "But in those few markets that still have a substantial print readership, moving some of your advertising spend into digital is an easy way to slowly wean yourself off of print dependency."

Thanks to IGA's collective buying power, the National Digital Ad 2.0 gives IGA independents and their shoppers access to the same kinds of national offers that large chains get, with new offers debuting every other week on IGA's interactive, mobile-friendly digital platform. Add to that a targeted local ad buy that that reaches shoppers in your area in the online spaces they visit most—at no additional cost and no effort on your part—and it's easy to see how the National Digital Ad is already working on your behalf to engage shoppers. 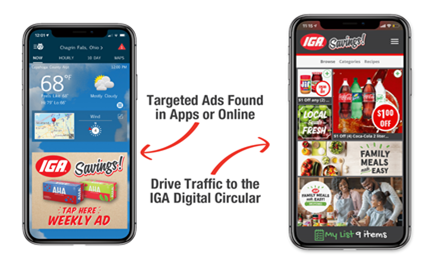 And because the National Digital Ad is, well, digital (and therefore trackable), it's also easy to see just how well it's working. Shoppers are spending an average of nearly five minutes a visit on the digital circular, and the ad is averaging 2 million impressions a month over the last four months.

But the real magic—and an even bigger boost in sales—happens when retailers use the IGA-provided resources to promote those national ad offers in their stores, and most importantly, shift a small amount of their print budget into the ad to feature and promote the local offers they usually put in their local circulars.

What kind of investment are we talking about? When it comes to IGA's National Digital Ad 2.0, a little goes a long way. In the example outlined in the graph below, a $7,500 investment—0.5 percent of weekly sales for this 5-store chain—results in nearly 1 million ad impressions, 6,870 ad clicks, and a nearly $60,000 return on investment per week. 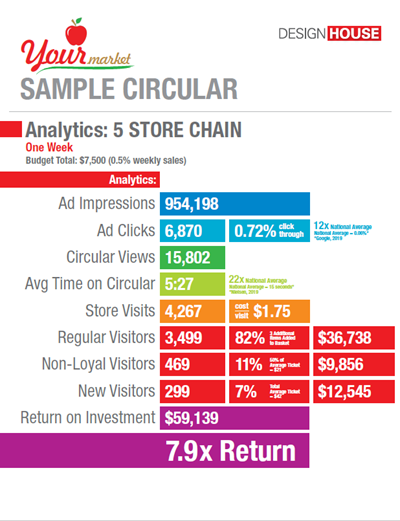 The National Digital Ad works just as well for single store operators, IGA Director of Digital and eCommerce Programs Sarah Rivers says. "Retailers currently using the National Digital Ad 2.0 are spending between $600-12,000 a month to increase their local reach," Rivers says. "That includes single-store operators and multi-store independent chains, so the dollar amount varies quite a bit, but the effect has been positive even for small investments. The average increase in ad exposure when switching from print to digital is 73 percent, and 27 percent of shoppers who see a store's digital circular end up coming to the store."

The average increase in ad exposure when switching from print to digital is 73 percent and 27 percent of shoppers who see a store's digital circular end up coming to the store."

How does that translate to increased sales? "The national offers IGA provides combine with local content to drive more sales across the board. The majority of the stores running local content have seen a significant increase in the dollar amount of their national ad reimbursements," Rivers says, adding that six of the first 10 store groups to share local offers in the National Digital Ad saw Year Over Year (YOY) increases in National Digital Ad payments from 23 percent to 376 percent. "The only thing they did differently in 2020 as opposed to 2019 was add their local content to the digital circular," she says.

Keep reading to explore a case study of an IGA retailer's experience with the National Digital Ad 2.0.

When a team member suggested dropping their 16-page PDF ad and routing the funds to IGA's National Digital Ad 2.0, Hansen's IGA Markets Special Projects Coordinator Kari Hansen was skeptical. "I was nervous when we first did it," Hansen says. "But the numbers don't lie. What we see from how many clicks we get and how long people are on the ad—we know it's engaging shoppers."

In March 2020, Hansen's IGA Markets stopped their six-page print ad and switched to producing a 16-page ad as a PDF that they put on their website, emailed to customers, and shared on social media. But by October, they were ready to drop that PDF and shift their full monthly advertising budget (minus one page in local shoppers) to the National Digital Ad 2.0 after watching a webinar with Ross and Rivers.

"Our goal has been to eliminate print," Hansen says. "People are on their phones more than ever, so when we saw John and Sarah’s presentation and a member of our team suggested doing this as our weekly ad, we thought it was a good opportunity with COVID in the mix to do that."

With the switch from print to digital in place, Hansen reports that sales have been trending up 6-7 percent in recent months compared to this time last year. In addition, she is able to evaluate their spend and the ad's effectiveness thanks to the digital tracking and reporting. "There’s no way to tell who is looking at the print ad," she notes.

Tracking is especially important considering their monthly advertising budget. The business went from spending roughly $15,000 a month on the six-page local print ads to about $8,000 a month on the 16-page PDF, but none of those options provided measurable results. Once they shifted their $8,000 monthly local ad budget from the 16-page PDF to the National Digital Ad, they were suddenly able to see exactly where that money was going.

Hansen is grateful they were able to find a solution through IGA that made the technology affordable. "We knew we needed to do online advertising, but because we only have 11 stores, we didn't pursue it because of the cost," she says. "With IGA's National Digital Ad 2.0, we have a more affordable and effective alternative to print."

Hansen says the ability to add local content to the ad quickly and easily is a huge advantage over print. "We can customize by location, so if one of our smaller stores doesn't carry a certain item, we just don't put it in that store's ad," she says.

She especially enjoys the immediate changes she can make. "If something comes in and the quality isn’t good, we can pull that from the ad right away. With print, you have to be about three weeks ahead, but right now I’m working on next week’s ad," she says, adding that the adaptability is especially helpful in the perishables department.

Beyond the speed at which she can update the ad, Hansen says she enjoys leveraging the unique content available. "This ad also allows you to do some storytelling. We can add a video or a note saying, 'Stop in for a fish fry on Friday.' We can use different things that you wouldn’t have given space to in your print ad," she says.

That includes having fun with GIFs, which get big reactions on Facebook and Instagram, cooking videos from partners like Star Ranch Angus, and recipes from IGA's Family Meals Made Easy campaign. "It's a whole other tool to grab the customer's eye," Hansen says.

The National Digital Ad 2.0 has also allowed Hansen's IGA Markets to offer better discounts to their shoppers. "If a vendor comes to us with a great deal, we can add it right away," Hansen says. And the national offers give them a leg up on the competition. "We can offer the rebate in one click to the customer, which is different from our competitors." 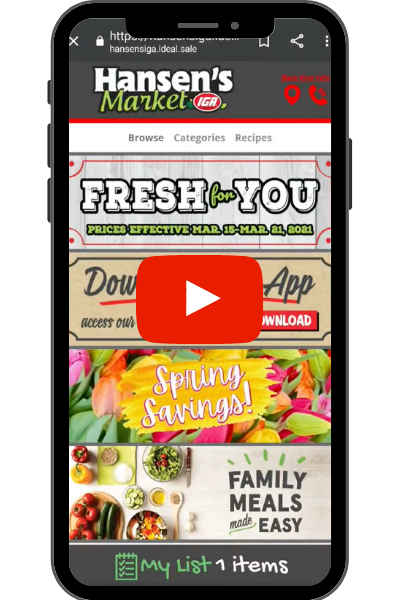 In addition to all of these customizable features, IGA is getting ready to launch a new feature for national offers. Next week, in advance of the March 21 National Digital Ad, IGA is launching its first-ever digital gatefold. The gatefold, which will advertise the Powerade March Madness shopper promotion, is a CPG-funded effort that will drive additional traffic to each IGA retailer's digital circular through the National Digital Ad. Learn more about the digital gatefold and the Powerade promotion and offers here.

Ready to sign up for the National Digital Ad 2.0? Click here to schedule an appointment with Sarah Rivers.