"30 years ago, on October 7, 1991, I walked through the front door as the new manager of McKim's IGA, recently purchased from the previous owner of Mt. Vernon IGA," Larry Williams wrote in a 30th anniversary reflection on Facebook. "In some ways, it seems like it was just a few days ago and in other ways, it seems like a lifetime ago. I’ve tried my best to be a part of the community, to live up to the standards of an IGA retailer and to offer an alternative to the 'big box stores.' In other words, I tried to be HOMETOWN PR

That's no easy feat in today's grocery industry. Over the past few years, two out of three independent grocery stores in Mount Vernon have been sold, while McKim's IGA, the lone holdout in Indiana’s southwestern-most city exemplifies 30 years of staying power. Since 1991, McKim’s IGA has maintained a secret recipe for resilience. John McKim took a hands-off ownership approach, entrusting Williams to run the store while prioritizing community support (and run it he did, now with 55 years of industry experience under his belt).

Hailing from nearby Evansville, Williams was working for grocers as soon as he was legally employable under Indiana state law. His résumé is a lesson in supermarket history and acquisitions, from Royal Superfoods to Wesselman's. When SuperValu purchased a store in Mount Vernon, mutual industry connections brought Williams and McKim, owner of McKim Foods, Inc. together.

After interviewing with McKim and his son Brett, Williams was offered a management position with McKim Foods. "Harry Lincoln from Lewis Bakeries told me, 'Simply do the job John wants you to do, and you'll have the freedom to run the business your way,'" Williams says. Turns out, that prediction was exactly right. McKim and Larry worked together for decades, building the business and making McKim's IGA the community grocery staple that it is today.

John McKim passed away in 2018, as did his son, and McKim’s IGA remains under the ownership of John’s wife Barbara McKim and their daughter Stacy. Williams stepped back and semi-retired as general manager this past June, and plans to pass the management torch to his three sons, but remains involved in the business for the foreseeable future.

Williams raised his sons as a single father, and put down roots in Mount Vernon within a few years of joining McKim’s operations. After bringing his boys onboard as teenagers, all three have followed in their father’s footsteps at McKim’s IGA with Brian (41) working as store manager, Matthew (36) as bakery, deli, produce, and catering manager, and Kevin (35) overseeing operations in the meat department. The Williams men also take great pride in being local property owners and active members of the Mount Vernon community, with Brian serving on several boards, including United Way of Posey County. As Larry asserts, “Hometown Proud isn’t just a business slogan. It’s a way of life.”

Even in a town of 6,500 people, the grocery business has changed significantly over 30 years, especially amid the COVID-19 pandemic. McKim’s has faced its own challenges and successes, but compared with many local businesses, the store is nearly fully staffed, despite issues filling cashier positions.

The biggest change Williams has seen during his longstanding tenure with the store? The overall shift to plastic spending with debit, EBT, and credit cards now accounting for 60-70 percent of sales in store. That shift has allowed the store to install some self-checkouts—a feature Williams admits he never wanted due to their impersonal nature, but have become a necessity to meet the demands of the store’s tremendous lunch business. "It’s important to serve customers quickly," he says, noting that the new technology is meant to enhance the shopper’s experience, not take away from it.

Technology is also helping the store with advertising. Their move to drop the print ad in favor of going digital has resulted in more sales despite a drop in total customers. Compared with last year’s sales increases during the beginning of COVID, the store is currently three percent ahead of Q3 and Q4 2020 performance, and well ahead of 2019 numbers. 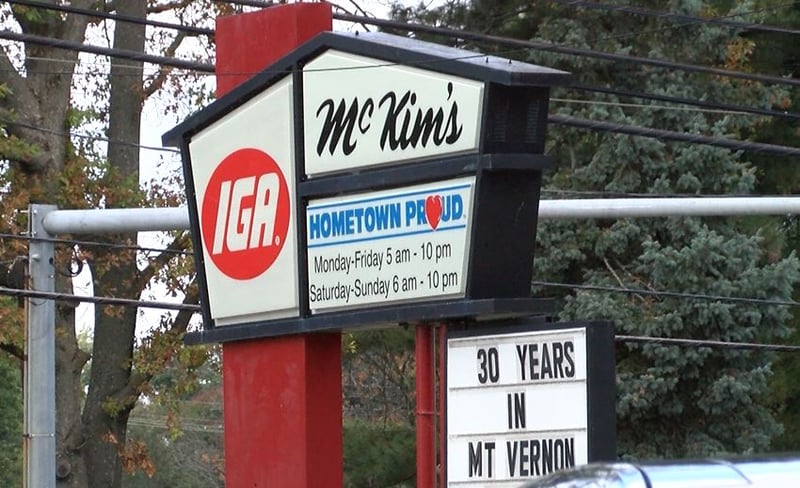 This fall, McKim’s IGA celebrated its 30th anniversary throughout the month of October, giving away a $30 IGA gift card every day, as well as other prizes like a grill and big screen TV. The Chamber of Commerce hosted a ribbon cutting ceremony, followed by a free lunch of hotdogs and hamburgers, and included IGA CEO John Ross in attendance, along with 50 people from the store and Mount Vernon community.

As Williams reiterated, the store’s lasting relevance comes from being an authentic part of the community. From the store’s contributions to local nonprofits to offering local residents a chance to bowl for a frozen turkey at Thanksgiving (held November 24th this year), the endurance of McKim’s IGA lies within its community impact.

For people like Williams, IGA is a way of life, earned through years of hometown pride, including hiring and serving members of the local community, as well as bringing up a family who has embraced an admirable work ethic and enthusiasm for the business in spite of its continued changes. After decades training his A-team, Williams is confident in a job well done. “I’m already semi-retired. The one thing I had to do was raise my boys, and I nailed it. If I leave this store tomorrow, it continues on without missing a beat. And that’s the best legacy I could ever have.”