If you are an IGA retailer looking for resources related to COVID-19 visit IGA Alert.

IGA Chairman Emeritus Dr. Thomas S. Haggai, 89, passed away on March 27, 2020. Dr. Haggai spent nearly half his life in service to the Independent Grocers Alliance (IGA). In his more than 40 years with IGA, he occupied a variety of roles, from the first person outside the food industry to ever sit on the IGA board to later chairman and CEO. And while Tom stepped down from his daily duties at IGA and was named chairman emeritus in 2016, he never stopped caring about IGA, the people he worked with for so many years, or most importantly, his beloved IGA retailers. 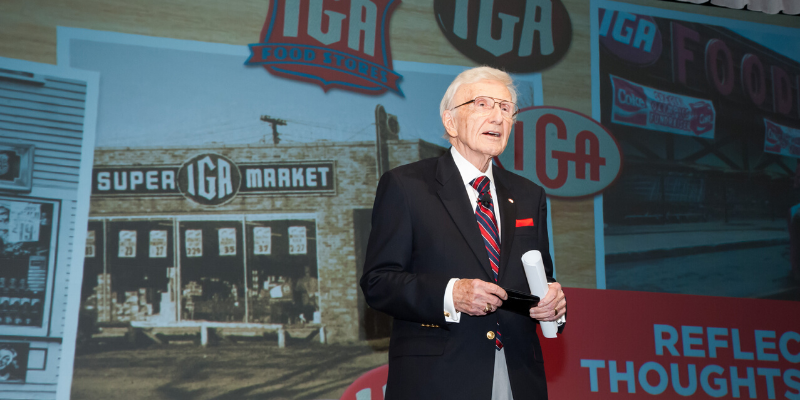 How did a Baptist minister, writer, radio commentator, and public speaker with no food industry experience become an icon in independent grocery? It all began in the 1960s when IGA founder J. Frank Grimes read about Dr. Haggai’s words of wisdom on family and the Christian faith. Grimes struck up a friendship with Dr. Haggai, who soon became a frequent speaker at IGA’s national events and regional meetings. 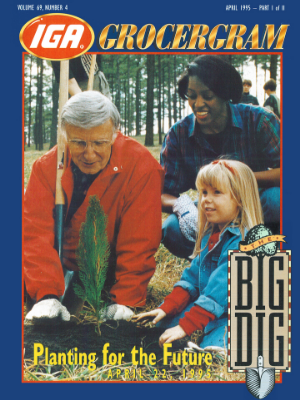 Dr. Haggai, who had a radio show sponsored by IGA and monthly column in IGA Grocergram publication for retailers, soon became known as “the voice of IGA.” His involvement in IGA continued to grow over the years, first with his appointment to the IGA board in 1972, then as non-executive chairman in 1976, and as CEO a decade later.

Under Dr. Haggai’s leadership, IGA began to build an Alliance-wide image of higher quality and service. He tightened restrictions for store memberships to IGA, and quickly thereafter, IGA drew interest overseas, with respected retail groups from Japan and Australia requesting membership in the Alliance. Over the course of the next decade, Dr. Haggai would be responsible for some of IGA’s most memorable accomplishments: creating the Red Oval Family partnership, bringing national manufacturer opportunities to IGA retailers, spearheading the creation of the IGA Hometown Proud tagline and television advertising campaign, and soaring global expansion in Australia, China, and other areas of the world, to name a few.

And while Dr. Haggai’s impact on IGA as a brand is undeniable, it’s his contribution to the IGA family—as a spiritual leader, friend, and mentor—that will no doubt be his lasting legacy. IGA CEO John Ross describes that legacy as far-reaching and unending.

From the day I began at IGA, everywhere I go, people have asked me about Dr. Tom. From stock clerks to CEOs, he was connected across this industry and the world personally—but also emotionally. The entire IGA family speaks with profound admiration about the man who was not just the voice of IGA, but also its heart and soul.

Dr. Tom respected the people who feed our communities. He was humble about the effort it takes to keep our grocery system going, and in awe of the sacrifices that regular people take to keep food flowing, from farm to wholesaler to store to table. He truly believed that everything we did mattered. And he took the time to say that in a way that didn’t feel fake or forced.

Tom was very proud of his tenure at IGA, but even prouder of the IGA retailers he served. We will continue to carry his friendship and legacy in all we do."

Tributes to Dr. Haggai are coming in from all over the world, including this video from IGA China.

For more on Dr. Haggai's legacy, read IGA Chairman Mark Batenic's message, and click here for just a few of the messages we have received from those who worked with him. We encourage each of you to continue to share more in the comments below, and we will compile those messages to send to Dr. Haggai’s family.

Previous Story
← A Tribute to Dr. Tom Haggai
Next Story
IGAs Go Above & Beyond in Times of Crisis →

Join IGA at The NGA Show This September