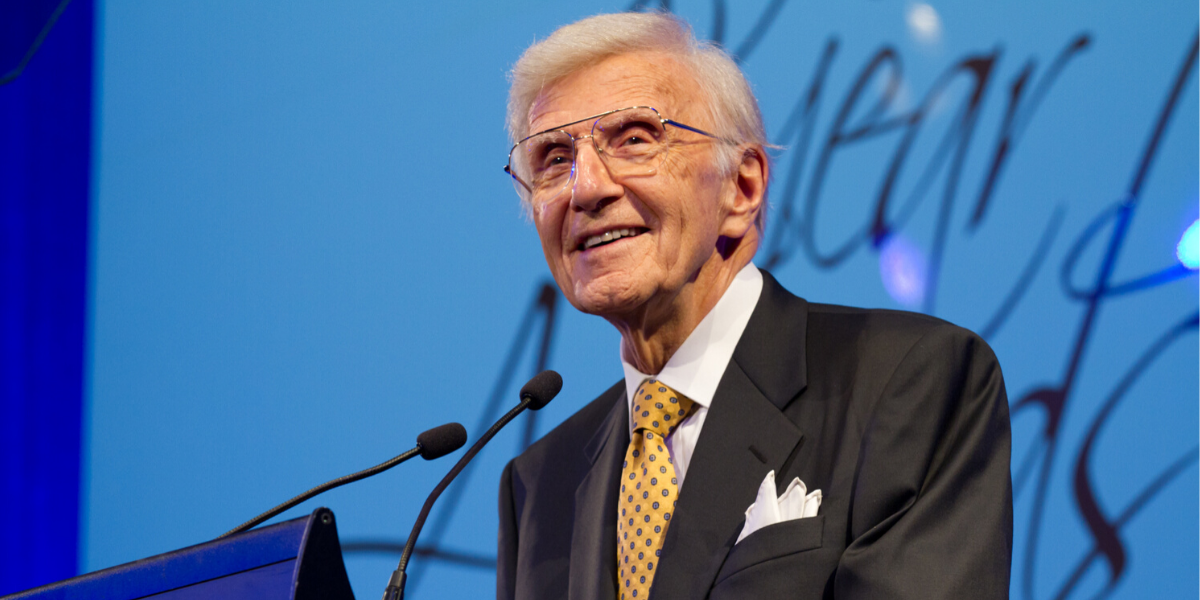 A Tribute to Dr. Tom Haggai

When I got the news early last Friday morning that Tom had passed during the night, I was first relieved for him that his short suffering was over and he had gone to his heavenly rest. During the countless conversations we had on our travels together, he always told me he was not afraid to die—or “be promoted to glory,” as he put it—but that didn’t stop the huge sense of emptiness that came next. The world lost a true servant of the people that day, and I—like so many of you—lost a dear friend.

When I first met Tom in 1983, I was working for the Waynesboro, Virginia location of the Fleming Company—a now defunct IGA wholesaler. We had just won the IGA Growth award for the previous year, and he presented the trophy to us at an annual IGA conference in Arizona. I asked if he could come to Waynesboro to present to our entire company since the team had made the award possible, and he jumped at the chance.

I had never met him before. I knew who he was because when I worked in an IGA store in Lawrence, Kansas during college in the late 60s and very early 70s, I always read his IGA Grocergram column in the break room. To me then—and still now—he seemed a larger than life figure. And now here he was planning to present this award to our company in Waynesboro. What a thrill.

That meeting began a lasting, deep friendship that followed me during my career, from location to location in both IGA and non-IGA divisions of Fleming. We always crossed paths at conventions and industry events, and our conversations never failed to inspire me.

So, when I got a phone call in July of 2006, I thought that he was just calling to talk (because we all know he sure did love to talk!). Turns out he called to see if I might be interested in coming to IGA and becoming the CEO. I was flabbergasted! "Me, run IGA?" I said to myself. How did this man know that the retail company where I was COO was preparing to sell? Only the owner and I knew what we were planning, but that was just Tom. He was one step ahead of everyone. He said, “Come to Houston and meet with me and Drayton McLane and let’s talk.” Thus began an unexpected journey, and what journey it was.

I had the privilege of working closely with Tom for 14 years. He was the third of three mentors I’ve had in my life, after Dean Weeries and Jerry Austin. And although I was already in my 50s when I came on board at IGA, I knew from the beginning there was still so much for Tom to teach me.

For one thing, he didn’t just know everyone, he remembered them, knew about their families, and concerned himself with every detail of their lives, no matter how small. He had a remarkable memory, but his real gift was that he truly and honestly cared about people. Everyone he met was a friend, and every friend deserved his time and attention. He was generous in all aspects of his life, but none more so than sharing what he knew. And let’s face it, there was no better storyteller than Tom Haggai, and I loved to hear him talk.

He talked about attending Furman for college, how he played catcher on the university baseball team, how he came to be a minister, how he came to know J. Frank Grimes, and how that opened his eyes to independent business, IGA, and the communities we serve.

He shared stories about his love of life, his God, his faith, his brother John, his wife Buren and the rest of his family that first and foremost made him who he was. And about his love for IGA, the people he worked with there like his longtime executive assistants Mary Helen Potts and Barbara Wiest, Adam Bozzuto and the rest of the IGA wholesalers, and most of all, the IGA retailers. The Horatio Alger Foundation, High Point University, his country, and his adopted state of North Carolina were next. It was like a story with no ending, and no end of inspiration.

I watched him talk to crowds big and small. You could always hear a pin drop when he spoke, and it was amazing to see how audiences hung on every word.

I remember in particular the time when he spoke to more than 1,200 folks in the room at the IGA EXPO in Australia. It was a dinner meeting and award ceremony, and he was scheduled to say just a few words, but ended up speaking for 20 minutes, and no one minded. His message was simple. He said to the retailers, distribution folks, and vendors in the room, “I believe in you. What you are doing is serving people in all walks of life. That is what we are put on this Earth do. You are doing it. And I BELIEVE in YOU.”

He had the same message at countless IGA Global Rallies and at similar gatherings in China, and it never failed to inspire. He estimated that he spoke to over 2,500 different audiences over his lifetime. I would not challenge that number; it was probably more.

Even when he had officially retired in 2016 from active leadership of IGA, we still continued to talk weekly. He always wanted to be updated on what was happening at IGA, and how the people he loved were doing. The calls became less frequent as he got older and weaker, and I missed them every day—just as I’m sure I will for the rest of my life.

In typical Tom fashion, he was giving to the end. He donated his body to High Point University Research Center for Medicine so that he might continue to help others. We shouldn’t have expected anything less from him.

As you can imagine, tributes for Tom and words of condolence are coming in from all over the world. We are compiling them all so we can share them with Tom’s family, and we encourage each of you to continue to share more in the comments below, and also view the video we compiled from his many years at IGA.

Tom always said his speaking ability was a gift from God, and with it came a responsibility for the betterment of all. He started preaching on the streets of Boston at the age of 12, and from that point on he made it his mission to leave the world a better place than how he found it. There is no doubt in my mind that he did just that.

In the end, we will miss him terribly, but I for one find comfort in the fact that he is looking down on us, encouraging us to be the best we can be and to take care of each other. His ability to motivate, mentor, listen, teach, speak, pray, preach, and bring people together will always be remembered.

One final thing: As you can image, all that we’re doing to honor Tom now is less than what we had hoped to do, but rest assured we will celebrate his life together when the world is ready. Right now, he would want nothing more than for you to stay safe and healthy, and I know he’s watching with pride at how our retailers are rising to the challenge to feed people in their time of need.

Previous Story
← New Resources to Help You Serve During the COVID-19 Outbreak
Next Story
How Dr. Tom Haggai Changed IGA →