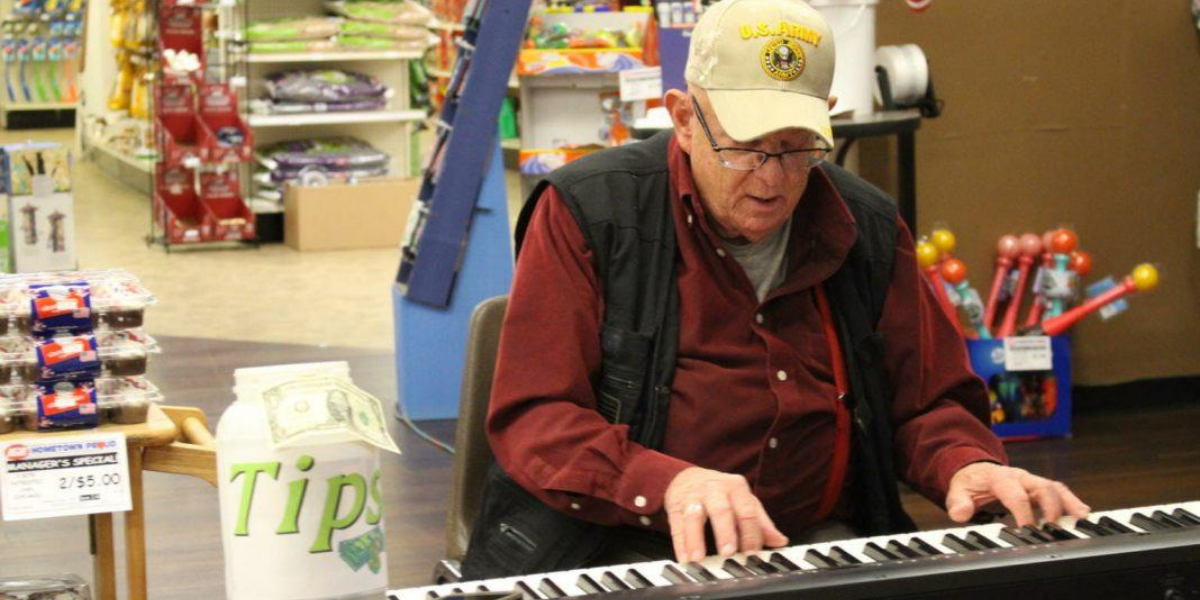 Offering live music isn't typical for most supermarkets. But, independent retailers are always trying new ideas, especially if they bring community together and help out someone in need. Foodland IGA, Juneau, Alaska went against the norm by hiring a famous local musician and serving customers in a whole new way.

In the absence of cruise ships due to COVID-19, Juneau, Alaska hasn’t seen its usual influx of tourists, leaving many businesses and performers unable to operate as they have in previous summers. One such business is the Red Door Saloon, a watering hole popular among Alaskan cruisers for its old-fashioned swinging doors, sawdust floors, and the sing-along stylings of its house talent. The Great Baldini, better known to locals as 81-year-old seasonal performer Bobby Reynolds, has been playing the Red Door Saloon for over 10 years, taking requests and adapting song lyrics to suit the spirit of the crowd. With 60 years in the entertainment business, Reynolds has played jazz and blues classics on and off cruise ships, and while his technical skills span brass and piano, he’s become best known for his impromptu jokes and commentary on relatable subjects like age and marriage. A native to Florida, Reynolds has spent past summers performing for tourists in Juneau, but like many Americans, he found himself in a predicament this year, so he opted for a creative solution to escape Florida in the midst of its largest COVID-19 case load.

As a Foodland IGA customer and all-around friendly guy, Bobby Reynolds had become well-acquainted with the Juneau store team, including Store Director Rick Wilson. While Bobby originally reached out to Rick for potential employment stocking shelves, Rick opted to put the Great Baldini’s skills to use in a service apropos of his lifelong talents. As Reynolds tells KTOO, “I called the general manager at the IGA store and he said, ‘Bobby listen, you’ve been in the business a long time. Why don’t you bring your piano and set it up over here? Maybe we’ll try something.'”

Unlike the saloon, which welcomed boisterous revelry in response to Reynolds’ showmanship, Foodland IGA offered Reynolds a much tamer environment and audience. While he has delivered highly skilled renditions of everything from Cab Calloway to Louis Armstrong on and off cruise ships, Bobby’s supermarket set features family-friendly favorites that span Frank Sinatra and The Flintstones.

Reynolds has been playing for store shoppers five days a week for several hours; some days he’ll come in to perform at lunchtime, and then come back before dinner when the crowd picks up. Since most locals seldom had a chance to chat with Bobby during his summer saloon sets, customers have turned his in-store appearances into opportunities to connect with Reynolds and other locals in a familiar environment during a less than usual high season.

When asked how things have been going since Reynolds began his unofficial IGA “residency,” Wilson says he is extremely pleased with his enthusiasm among regular customers. “He’s such a vibrant personality and so many people in town are familiar with him," he says. "There’s at least one person or a handful of people stopping by, just catching up with him. It’s a pleasant, positive atmosphere putting him to work. He’s having fun, and people are having fun seeing him.”

The Great Baldini even made an impression on a 15-year old IGA courtesy clerk who has been playing piano since age five. The teenager was over the moon when Reynolds let her play his keyboard and showcase her skills in front of store employees and customers. Not only was it a joy for her, but Reynolds was thrilled to provide the opportunity to a talented young musician in the IGA family.

Despite the sluggish tourist season's effect on Juneau businesses, including Foodland IGA, one upshot of this off-season has been a success story of a local community coming together to support one another, even if those locals are part-time Alaskans. Wilson characterizes the importance of supporting a friend like Reynolds for his lightheartedness and uncanny ability to “give everyone a little positive in our negative world," he says.

Regardless of those good vibes, Wilson knows the Great Baldini’s reputation for blunt banter and forewarns current Foodland customers and future patrons of Red Dog Saloon: “If Bobby sees you wearing a funny hat, he’s gonna give you a hard time about it.”