See What IGA Shopper Rewards Can Do for You

The word "digital" gets thrown around a lot nowadays, and for good reason. The new generation of shoppers is made up of digital natives who have always had inexpensive access to the internet. So much of marketing is digital now that it might seem like the only form of the trade. That's because digital marketing—marketing efforts that use electronic devices or the internet, like social media, mobile, and email—not only reaches these digital natives and older generations, but also delivers feedback to marketers about shopper behavior, allowing for more personalized and effective marketing.

Thanks to this feedback and the precise targeting capabilities, brands are increasingly spending their marketing dollars on digital. In fact, brands in the U.S. and U.K. spent 23 percent of their budgets on digital marketing in 2017, compared to just 16 percent in 2016, according to a recent study.

IGA has been investing in digital marketing to help our independent grocers succeed through the National Digital Ad and IGA Social programs. According to Jim Walz, the vice president of IGA Brand Development, these practices put IGA stores on par with national chain stores.

For IGA retailers to better compete and get ahead of national chains, we must use digital marketing to enhance our unique differentiator, which, Walz says, is the personal relationship IGA retailers have with their shoppers.

"Chains are starting to mimic the one-on-one relationship with the shopper—they are trying to take that from us," Walz says. "We have something that they will never have—that authentic in-store relationship that shoppers know who you are and you know who they are."

The next step, says Walz, is to expand that personal relationship to digital. "To be winners of the future, we also need to have a digital relationship. It's not one or the other, and in our view, it's not optional."

"Enabling the program to work across IGA is a very simple, nimble piece of software that lays on top of the POS system in your stores," Walz explains. Instead of converting every store to the same POS system—which IGA CEO John Ross says could take decades—IGA Shopper Rewards uses the cloud. "We embed a little tiny bit of code in the POS system and it pops that data up into the cloud," says Ross. "Once it's in the cloud, we can begin to do cool stuff with it." These digital marketing tools will:

Until now, offers featured in the National Digital Ad needed to be manually programmed into each retailer's POS system in order for shoppers to receive the discount. But when you're on the Shopper Rewards platform, the offers are automatically loaded into the POS system for you, meaning all you have to do to make your National Digital Ad a success is promote the products with in-store signage and social media posts (find resources here).

“Retailers who up to this point were missing out on great sales-building opportunities because they didn’t have the time to upload the offers will now be able to capture those valuable CPG dollars,” Walz said. “And retailers who have been putting in the work can focus on promoting offers to their shoppers. It really makes the National Digital Ad turnkey.”

And once the ad window has ended, the IGA Shopper Rewards platform will also automate the reimbursement process, meaning no more need to manually pull and submit a report.

Inmar, whose team is project managing the IGA Shopper Rewards implementation, will build a microsite for your store that loads coupons for products you actually have in the store, ensuring the offers your shoppers receive are ready to be redeemed.

Then the shopper will receive a welcome email where they can click and enter the store's microsite to see the available digital offers. The shopper can begin the personalization process here by choosing the types of offers they want to see first (pet, baby, produce, etc.).

Once the shopper has registered, the platform will start tracking their purchases and customizing coupon offers for them. Then the personalization gets even better. Says Matthews, "Another piece of IGA Shopper Rewards is targeted email. As shoppers register for digital offers, and they come inside your store and do their shopping, we are able to see what they're buying. When we send out emails to these buyers, it's going to be personalized to them."

These emails provide a personalized experience that is very in-demand with shoppers. It demonstrates that you are listening to what they want and need. For example, shoppers without young children don't want to see coupons for diapers, and if they do, they may tune out of that store's emails and offers. With IGA Shopper Rewards’ targeted emails, the offers will correspond to the shopper's purchasing patterns, so they will be more likely to read and use the offers they receive.

According to Matthews, the highlight of these rewards is that the shopper doesn't have to do anything. Based on their shopping history, they will receive relevant rewards and offers from the deals IGA negotiates with CPG brands, which will keep your shoppers coming back.

Walz feels these receipt rewards are the "unique differentiating component of IGA Shopper Rewards," as IGA is ahead of shopper demand with the feature. He says these rewards act like a casino game—they're random, fun, and expire, and are replaced with a new reward the next week.

These two new components of the IGA Shopper Rewards are key differentiators for IGA retailers. "The real breakout is the targeted email and the receipt reward," says Walz. "The targeted email is the opportunity for you to easily and consistently reach out to your shopper and help them simplify their shopping experience, demonstrate that you know them well enough to suggest items that they have purchased before and can save money on with this tool from you."

For IGA Shopper Rewards to operate at its best, IGA retailers must join together. According to a recent survey, Walz says we have more than 30 different point of sale systems across IGA in the United States alone, which are too many to be efficient and entice CPG manufacturers to help our shoppers with deals.

"We can have a single database for IGA at your store and across the country," Walz explains. "We can have a way to uniformly tell the CPG manufacturing community that IGA is easier to do business with than ever before because we can execute promotions uniformly across the organization. And we can report back the results. Those are really the key elements this digital marketing platform makes possible for us."

Ross echoes that statement, saying, "I need the manufacturers to treat us like a retail chain. And in order to do that we need to behave like one. And behaving like one means that we have to develop this national communications layer."

Joining together can also save retailers money. Walz has found that stores are spending a lot of money on various marketing programs, but they're not united. With IGA Shopper Rewards, all IGA stores will be united under one program, reducing the price to only $99 a month. Together, IGA retailers make the platform effective and affordable, and enable IGA to add more features over time.

Launch Timeline and Next Steps

Walz says that IGA's goal is to have IGA Shopper Rewards installed in 90 percent of all IGA stores by the end of 2019. "Today, there are a little over 300 stores that are in some stages of activation for this program," he shares. That is about one-third of the stores in the U.S. Getting started is easy. Retailers can schedule a one-on-one consultation with IGA Digital Marketing Manager Sarah Rivers to indicate their interest level and discuss the POS they're using so IGA and Inmar can coordinate the rest of the installation.

"Every day that you don't have this system is a harder day for you than it needs to be," Walz stresses. "And it's another day that we as IGA are not taking advantage of a tool that we desperately need to be able to put ourselves in position to work with the CPG companies in a way that other national companies can. We can do it too, as soon as we get this going."

To get started, watch the informational webinar below from John Ross and/or schedule your one-on-one consultation so IGA and Inmar can learn more about your store's needs. After that, Inmar will act as the project manager for the platform implementation. 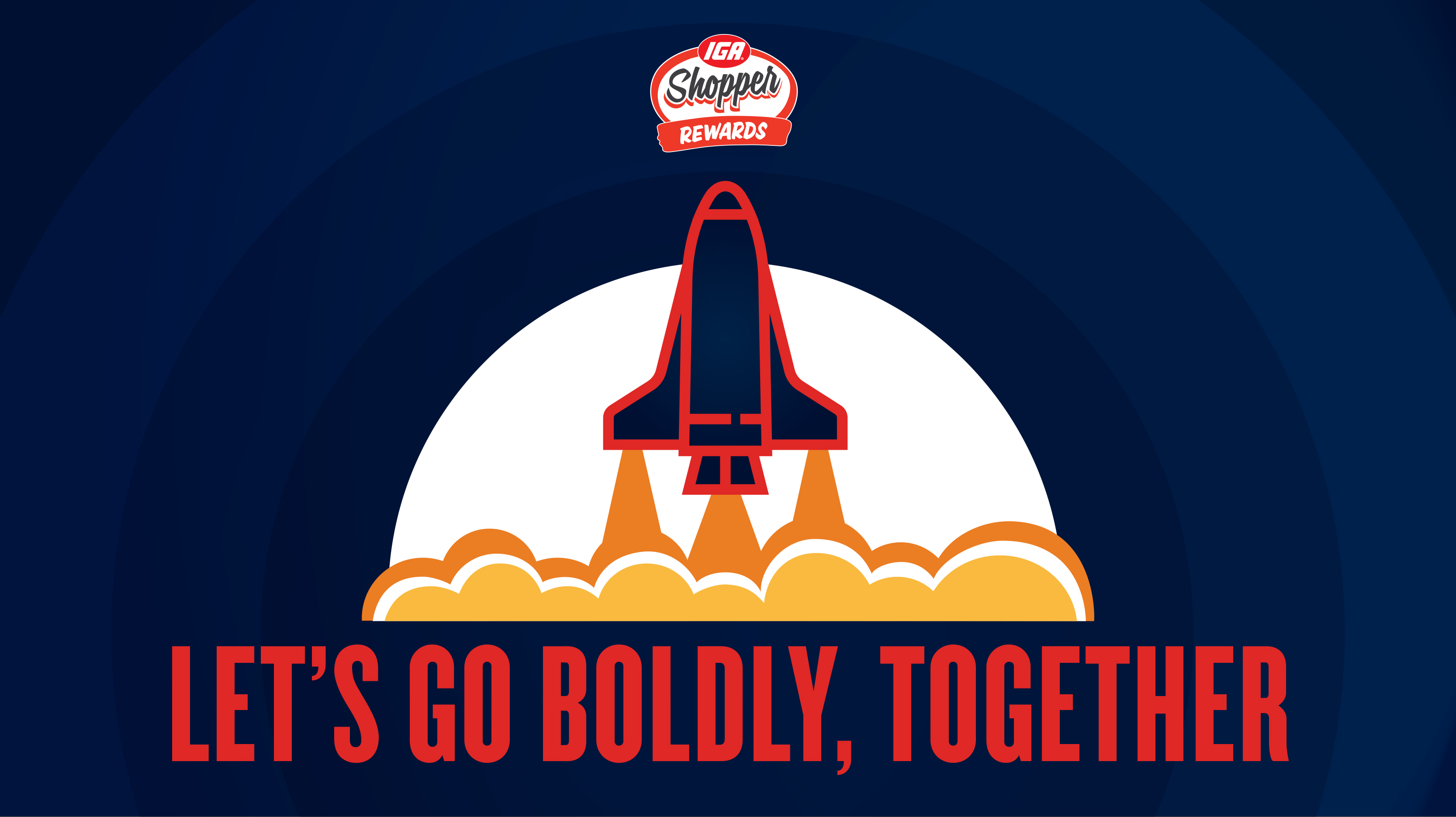 "Once we learn from IGA that the retailer is ready to get started with IGA Shopper Rewards, the team at Inmar will contact you, the retailer, and begin working closely with you to implement the store for the features and functions of IGA Shopper Rewards," says Matthews. That means keeping the store updated with progress, and working with the store's point of sale vendor. The best part? The retailer's work is minimal, since Inmar is working directly with IGA and the store's POS vendor.

Once implemented, IGA Shopper Rewards will act as a solution that will bring together all of the digital tools that IGA has been rolling out—and then some—on a grand scale that independent retailers normally wouldn't have access to, making you more competitive with national chains. "As independents, we need to amp up our game in knowing the shopper better," says Walz. IGA's new Shopper Rewards program can help each store do just that.