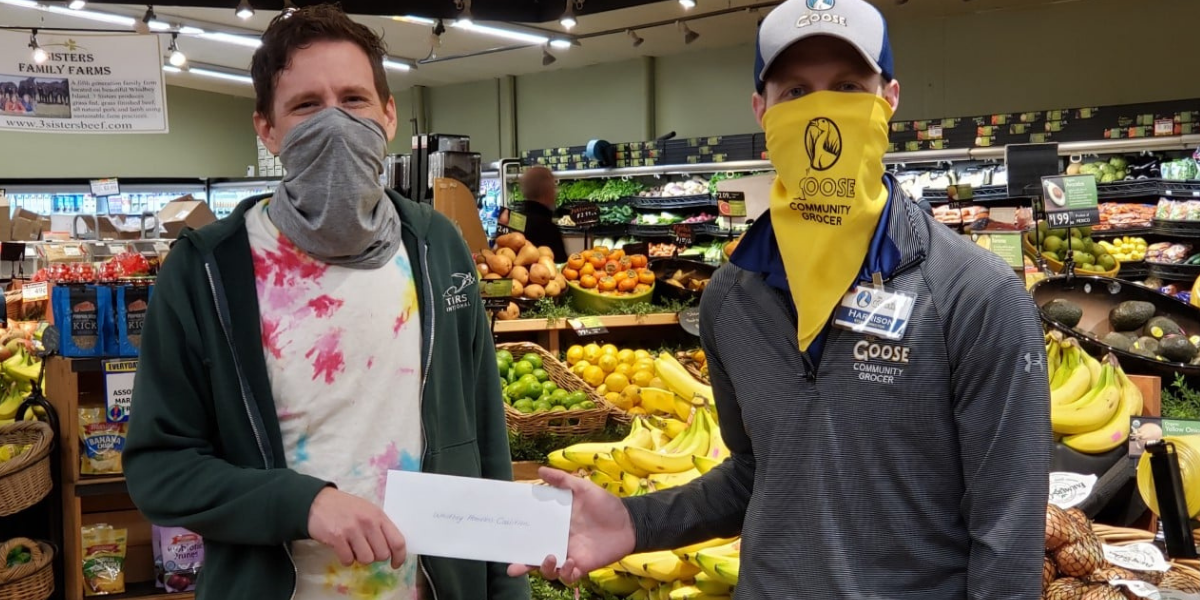 The IGA Goose Grocer Lays Golden Eggs for Its Community

As the fourth largest and longest island in the contiguous United States, Whidbey Island, Washington spans just under 170 square miles. The residents are the driving force behind local retailer The Goose Grocer's latest program that reinvests in the island and its people. It's a straightforward fundraising tactic: simply ask customers if they’d like to round up their purchase to the nearest dollar to benefit a different local charitable organization each month.

In the month of October, the Goose raised nearly $3,500 for a donation to the Whidbey Island Homeless Coalition. According to Tyler Myers, owner of the Myers Group, a family-owned grocery business that operates five IGA stores in the Pacific Northwest in addition to managing The Goose Grocer, the gradual accumulation of change from the monthly round-up program tends to average around the same amount every month. “The Goose [Grocer] wants to be that community business that’s giving back," said Myers, owner of the Myers Group, "This is where we can make a big impact, and it won’t cost the store much money to do it. The customers get the credit, but the store receives goodwill as a benefit."

Non-profit Goosefoot was responsible for bringing the Goose Grocer into the Bayview area, and as an organization dedicated to Whidbey Island causes, it made a commitment to reinvest store profits back into the community. Over a decade later, Goosefoot continues to expand upon this promise of community support, and based on a common sense approach to raising common cents, The Myers Group will soon be expanding Goose Grocer goodwill at its IGA stores across Washington, Oregon, and Alaska.

When asked how recipient organizations are chosen for the program, Myers said that Goosefoot chose the 12 Goose Grocer beneficiaries in 2020, and noted the importance of leaving that decision up to the individual IGA store managers based on their respective market and community needs. “Each store can have a completely different fund recipient and goal. It could be the Humane Society, or it could be a local family who loses their home or has a sick child. We’re agnostic to whomever it goes to as long as it’s the right purpose,” Myers said.

Goose Grocer also uses signage to announce the following month’s cause, and displays the amount donated to each recipient, along with the rolling total of the round-up program since its inception. Future Goose recipients outlined as part of the 2021 calendar include Mother Mentors of Whidbey Island and the nonprofit Hearts and Hammers that covers material costs for local volunteers to repair and rehabilitate homes of people physically or financially unable to do so themselves.

While the round-up program was originally planned as a 2020 initiative for all six IGA stores managed by the Myers Group, the finer points of integrating the program with the store’s POS system took additional time and consideration. Ahead of their updated January 1, 2021 implementation, Myers added, “Not only does the program provide differentiation for the stores, it’s just the right thing to do. When you’re talking 19 cents, it’s an easy thing, and it adds up to a meaningful amount for these organizations.”

Considering the effects of COVID-19 on people across many American communities, small actions with impactful results offer reassurance that helping neighbors and local nonprofits doesn’t necessitate a wild goose chase to gain the support of regular customers.