The Ins and Outs of Crowdfunding for Small Business

When Brahm Ahmadi was looking for funding to build an IGA grocery store in an underserved part of Oakland, California, he turned to what some might consider an unusual source—his potential customers.

Coming from a nonprofit background in food distribution/access, and a food and health education, Ahmadi was no stranger to creative fundraising, which is why he knew crowdfunding—funding a venture by raising small amounts of money from a large number of people—could be just the solution he needed.

As part of the funding formula for Community Foods, Ahmadi has raised $2.5M and counting from a direct public offering (DPO) with more than 650 founding shareholders, 75 percent of whom are in Oakland. “They invested because they believe in the project and the need for it,” he says.

Understanding the Different Types of Crowdfunding

When thinking about crowdfunding, you’re probably familiar with online rewards and donation-based crowdfunding, which has raised billions to support projects and causes.

It can be a quick and easy way for independently-owned small businesses to raise capital, says Brian Belley, an equity crowdfunding consultant, who works with both investors and startups. He launched crowdwise.org in June to help spread the word and share information about this new field of investing.

Do you have a project that needs funding to make it happen? Maybe you want to launch a food truck, put up solar panels, or build a store in a new community. The first step in crowdfunding, Belley says, is to figure out the what, where, and who you’ll be selling to.

The what: Similar to online rewards-based campaigns, you set your fundraising goal and craft your story of why you need funding and how you’ll use the money. The difference here is determining your share price and the rate of return you’ll be offering investors.

The where: Under the federal Securities and Exchange Commission’s (SEC) Regulation CrowdFunding, or RegCF, anyone looking to sell securities (i.e. stock) through the internet needs to use an SEC-registered funding portal. These are regulated sites where potential investors learn about and contribute to available projects. Click here for the list of SEC portals. Some of these companies specialize in distinct niches, for instance mainvest.com focuses on Main Street, or cornerstone, small businesses. Belley recommends looking through a portal’s existing projects to see if the site is a good fit for your idea.

If you want to keep your campaign hyper local, you can look into options that might exist on a state level. If you go this route, you can only accept money from people in your state, which as an independent grocer serving a particular area, might not be an issue for you. “We see this more with the locally-based projects," Belley says. "You’re not trying to attract investors from all over the country looking for a billion dollar investment outcome (also called a “unicorn” in the startup industry).”

The who: According to Belley, the main advantage of equity crowdfunding versus a traditional bank loan is with the former, you’re engaging your supporters and getting them on board with the project. “You’re not just getting capital, but getting brand ambassadors, too," he says. "These are people who root for you and want to share in your success.”

Crowdfunding opens investment to everyone, not just angel investors with large bank accounts. The downside of having hundreds of prospective stakeholders, is you might end up with lots of unsolicited feedback, he adds. “But usually people are respectful of your time. They realize that if they are only giving $500 or $1,000, they won’t try and tell you how to run your business.”

Now that you know the basics of how crowdfunding works, let’s take a deeper dive into the real life IGA example: how Ahmadi used equity crowdfunding to raise $2.5 million to open Community Foods in West Oakland, California.

We recently spoke with him about his experience and tips for small businesses looking to embark on similar projects.

Q: How did you find investors?

A: While working in public health, I co-founded the People’s Grocery, which (among other things) ran a mobile grocery store that traveled throughout the community. We knew we had a large group of followers to begin with through People’s Grocery, so it made sense to pursue a direct public offering (or equity crowdfunding), offering shares through our website to California residents.

Since we already had relationships with our local supporters, we started first by reaching out to them. From there, I attended networking events, conferences, mixers, and employed some nonprofit fundraising methods. We relied mainly on word of mouth and grassroots marketing. 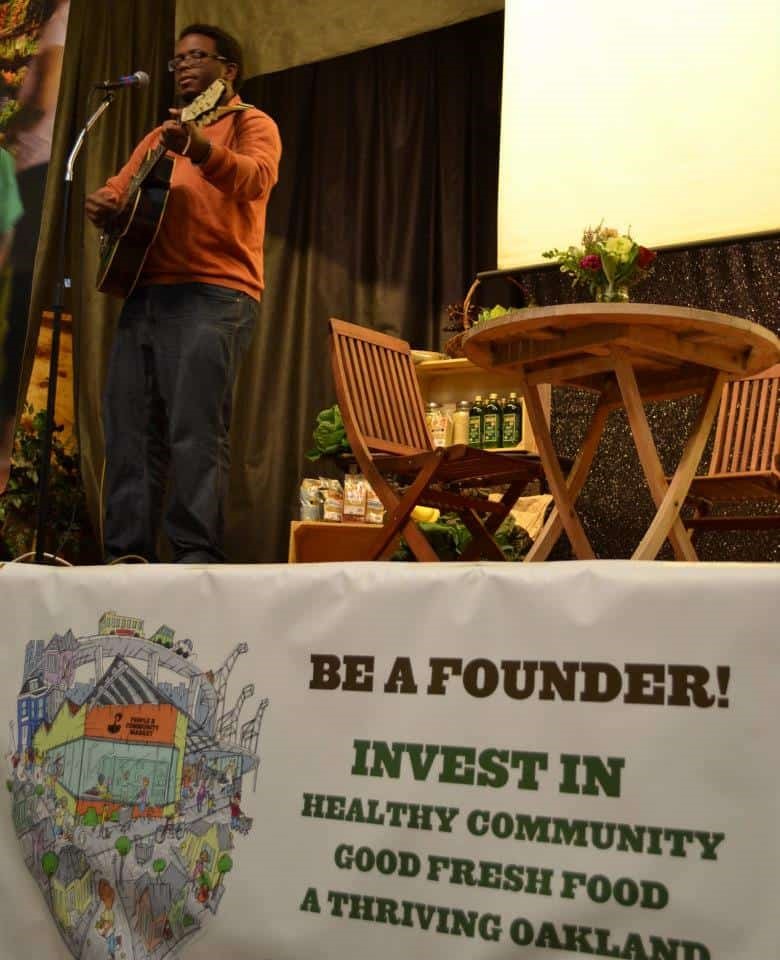 We had hundreds of California residents of diverse economic backgrounds sign on, and the majority never had the opportunity to invest in a small business before.

Q: How long did it take to raise money?

A: We did multiple campaigns, at different milestones in the store's development.

Technically, we’re still involved in this campaign, but we had put fundraising on pause, as I was way too busy getting the store ready. I’d like to raise another $180,000 to go toward having more working capital.

Q: What return do the crowdfunding investors receive?

A: Though the rate of return we promised was very modest, symbolically and psychologically I think the idea of being a stockholder really resonated with a lot of people. They get a three percent annual interest rate that’s accrued. And the terms are through the seventh year of operations. So there are some people who gave in 2013 who still have another seven years, since we just opened in June. It’s what we call patient capital.

Q: What advice would you give to others?

A: Key takeaways include:

Q: What’s your next step then going forward?

A: Clearly crowdfunding worked great for us, but now that the store is up and running, I’m looking at institutional funders, such as foundations, for Program Related Investments (PRI). These are essentially low-interest loans, given at a below market rate, where if you meet the assigned metrics and milestones they will reduce the payback by a certain amount.

Have questions about how crowdfunding could work for you? Check out crowdwise.org for more information about this new field of investing.