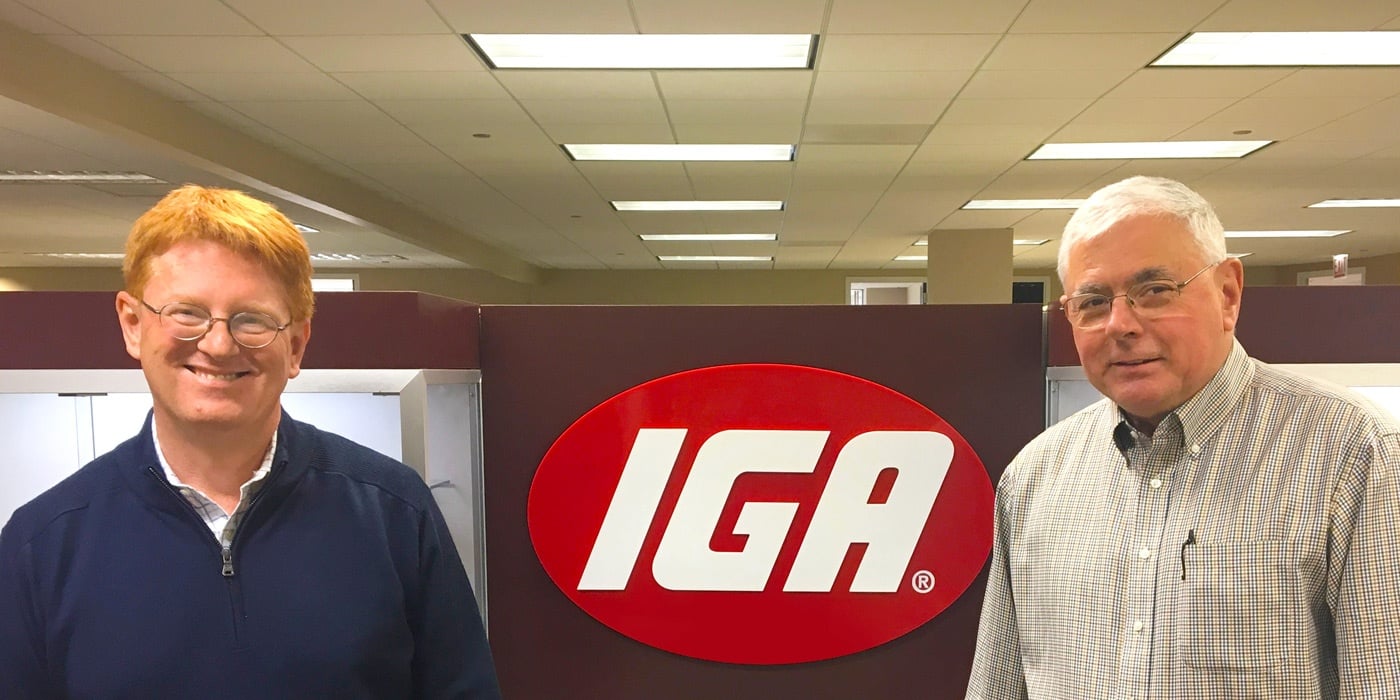 (October 18, 2017) On John Ross’ first day as president and CEO of IGA USA in Chicago on Oct. 17, he and his predecessor Mark Batenic took time to field some questions from Shelby Report Editor-in-Chief Lorrie Griffith. Ross already had met with members of the 38-person team at IGA headquarters before the 9 a.m. Central interview.

Asked what excites him most about IGA’s future and that of its independent grocers, Ross tied the answer to three consumer trends.

One is the changing definition of families and the “expectation that emerging families have about their relationship with both the retailer and food,” he said.

People are waiting longer to have children; households tend to be smaller; and “they are tending to reject the expansion of suburbia of their parents and grandparents,” Ross says; instead, they are embracing more ethnically diverse neighborhoods and walkable infrastructure. This knowledge will help IGA place new stores and merchandise existing stores.

A second trend is emerging consumers’ relationship with food, according to Ross, who has spent much of his career in the shopper data space, most recently at Inmar, and before that, at his own firm, Shopper Sciences. “They want to know what’s in the product; they want to know if was produced responsibly; they want to know it’s healthy for their family. They bring this expectation with them about the speed from farm to store to table that their grandparents never even thought of. They’re expecting higher quality product and their expectations for what is a minimum level of healthiness are dramatically greater than it was for their parents or grandparents.”

Again, IGA’s independents can make merchandising decisions based on these consumer expectations.

The third trend goes back to where younger generations choose to live and thus shop.

“They’re probably not going to get in their car and drive 20 minutes to bypass three grocers in order to get to a ‘super’ grocery store to save money,” Ross said. “They are probably much more likely to choose two or three locations that all provide a level of service that they can’t get out of a homogenized market. That includes things like access to fresh and organic product; it includes their relationship with prepared meals; and time saving. And there is this whole emerging new definition of convenience that is highly informed by how those shoppers shop online.”

Ross said when you put all those macro factors together, a picture begins to emerge of what kind of grocery shopping experience Millennials and the generations behind them may want—and not want.

“That may not lead to the giant 100,000-s.f. supermarket that serves suburbia today,” he says. “They may want a more personal experience, or a store that has a higher concentration of fresh prepared meals. They may want an interactive experience with their retailer so they can dialogue about the quality of the ingredients (or) experiment with new menus and recipes.

“All of those trends seem to me to prepare the next generation of shoppers for exactly what IGA offers.”

He elaborated: “A smaller store with a more intimate experience, which may have been a competitive disadvantage for things like supplier negotiating clout and logistics infrastructure—all of those things may be countered by the shopping experience, the experience of selecting and providing meals for your family. That may prove to be a massive competitive advantage for IGA in the near future…Homogenization leaves out a huge chunk of the population that actually doesn’t want that. Understanding the needs of the consumer population that doesn’t want that homogenized experience and then serving them is a great way to be successful.”

IGA, the only truly global grocery chain—with nearly 5,000 stores across the world—already is successful, Ross points out. “What I’m saying is that the next generation of young families are more likely to want the independent-style experience than the mass-produced, homogenized experience of the big national chains.”

The ‘luckiest guy in the world’

Asked about his first order of business at IGA, he said, “The first thing you do when you take on leadership of a project or a company—it doesn’t matter, whatever you’re in charge of—is you want to do a lot of listening.”

Ross said that he is “the luckiest guy in the world” to have the job of leading IGA. He worked with IGA for a little more than five years while leading the Promotion Network at Inmar, which works with all segments of the grocery industry around services such as manufacturer promotions, analytics services, loyalty products, digital couponing, logistics and supply chain, to name a few.

“I’ve got Mark (Batenic, former president and CEO) here, who will be both a coach and a mentor for me for as long as he can tolerate me,” he joked. “He can help ease me into the conversation.”

He said he already has experienced “an embracing culture (at IGA) that is willing to help me learn and understand the role the distributors play vs. the role that IGA plays in the marketplace and the needs of the independent retailers.”

Ross, whose grandfather owned an independent grocery store in West Virginia and who started as a “lot boy” at age 16, said he’s also learning the role of the manufacturers that support the independent segment, and the role the IGA brand plays internationally.

Before Inmar, Ross worked for Inter Public Group, a holding company that owns 180 to 200 advertising agencies worldwide, running the retail practice for its media brands division. After that, he started Shopper Sciences, “a research and analytics and consulting company whose mission was to understand shopper behavior,” he says.

Most ad agencies’ goal is to “deliver shoppers to your front door, but the agency rarely takes responsibility of converting that shopper into a customer. It’s up to the retailer or the brands serving the retailer to get the shopper to buy. Shopper Sciences was designed to provide analytics on what it’s like to go from ‘undecided’ to ‘decided’ and all of the media and in-store effects that drove shoppers to do what they did. We did that for everything from the largest grocery stores in Australia and the UK and Germany to the biggest brands like Coke and Kimberly Clark…all that aggregated data allowed us to have a view of shopping in total so that you could look at emerging trends; how are shoppers using digital, for example? Or what kinds of trip-changing shopping habits do you see over time as consumers have different relationships with new players like Amazon?

“What my career has taught me is that consumers are changing all the time,” Ross said. “Their needs are ever-evolving, the marketplace is moving fast, and certainly with the evolution of e-commerce and the consumer’s ability to get directly to a supplier in a way that wasn’t possible 10, 20 years ago, the whole nature of shopping has transformed. For any retailer—from the biggest nationals all the way down to the independent—understanding shopper needs is how you serve them. And, ultimately, being a great listener is a component of providing great customer service. So certainly my job as a new boss is to understand and listen; the brand’s job is to understand the needs of the consumer and these changing and emerging needs—many of which will lead to digital.”

Batenic will miss the people

Former president and CEO Mark Batenic, who had served in that role since 2006 and now is chairman of the IGA board, said what he will miss most about his role is “the people I work with here in Chicago (and) a whole consortium of people—the retailers, the distribution companies, the Red Oval partners.

“I will also miss working with our partners overseas,” he said. “We have developed some really good relationships with our Australia and China IGA retailers as well as countries like South Africa. It’s the people, when you get down to it, that I will miss the most.”

Batenic says he will continue to be interested in what happens at retail (“once it’s in your blood, it doesn’t go away”) and will “critique” the store where he and his wife shop in North Carolina.

As he transitions out of day-to-day operations at IGA, he sees a bright outlook for IGA.

“I think the future couldn’t be better. I think we have the right footprint in this country to serve the customers that John described.”

“It doesn’t matter what age you are. It’s not just the young people but the older adults that want that experience, and they want to support local.”

IGA has stores in both smaller communities and large cities.

“We have a fantastic store in downtown Seattle that does very well because Tyler Myers, the operator, knows what those people want in a five-block radius and he caters to them,” Batenic said. “I think the IGA brand and those people who run those kinds of stores are going to do very, very well. I’m very excited about that.”

His one concern is finding more of those kinds of operators—those that are willing to risk it all for the opportunity for success in the supermarket business.

“When you’re an individual (operator), it takes a lot of courage to invest everything you own into a supermarket,” he says. “And that’s what the individual entrepreneur/operators of IGA have done over the years. They are invested 100 percent. I’m not sure everybody understands that—that they are all signed personally on any kind of loan. But they are personally engaged, they are personally involved, and that’s been the backbone for IGA. And finding people who are willing to do that may be a little bit tougher today, but…we’re probably going to expand the scope of who can be an operator.

“I’m confident that those entrepreneurs are out there,” Batenic contined. “Entrepreneurship is the backbone of commerce around the world. More businesses are created every day by that entrepreneur.”

The grocery business is a people business, he adds, and despite the trend toward e-commerce, “human beings are social,” and it’s still a good thing that brick-and-mortar retailers, like IGA store operators, “can look somebody in the eye and thank them for shopping with you…There is still something about person-to-person that an independent operator can communicate and be in the communities they operate in.”

In retirement, Batenic will serve on industry-related boards (he becomes non-executive chairman of IGA in January 2019, for example), participate in charity work in his local community and spend time with his grandchildren. He also will get to do more railroading, which is his favorite hobby, and volunteer with an organization devoted to that.

Previous Story
← Q&A with IGA’s new CEO
Next Story
Is Supporting Local Business Important to You? Then so is net neutrality… →