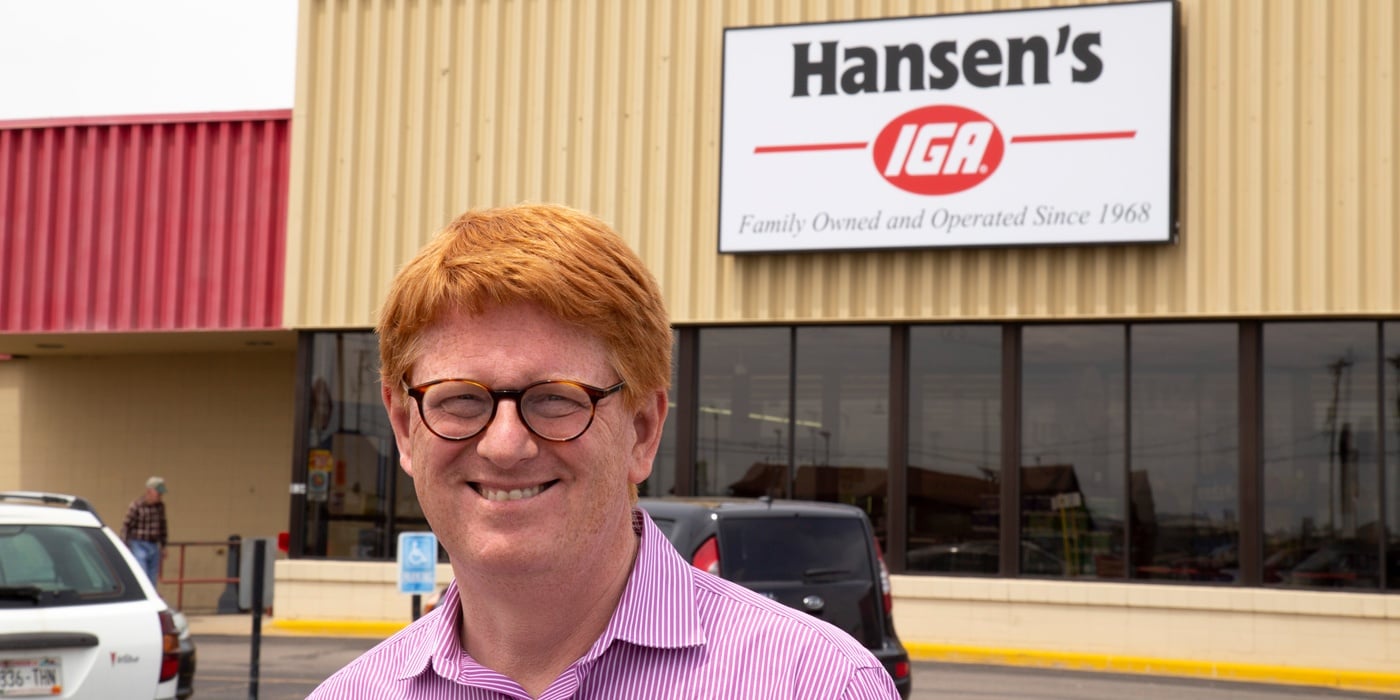 (September 29, 2017) John Ross said he intends to “check his ego at the door and listen” when he reports to work at IGA for the first time next month, but the incoming president and CEO isn’t hiding big ambitions for the independent grocer network.

Ross said he intends to reawaken the energy in and around IGA, and use his background and data and research to help members tap into the possibilities arising in a fast-changing market — particularly around digital shopping and changing consumer expectations and lifestyles — that he says may be favoring nimble independent grocers for the first time in decades.

Ross, 54, comes to IGA from Inmar, the software and data company through which he met his predecessor, Mark Betanic. Ross is also a former chief marketer for The Home Depot, who traces his retail background to his grandfather’s grocery store in West Virginia, where he grew up.

The following is an edited transcript from Ross’s conversation with SN, held Thursday.

SN: What the’s the first thing you want to do when you report to work at IGA?

Ross: Like any job, to walk in without a plan for active listening is a mistake. And you’ve got to walk in checking your bias at the door, and be prepared to listen to the folks who’ve been there doing it, and especially the retailers themselves. So I hope to spend as much time as I can engaged with retailers, the suppliers that specialize in the independent segment and the consumers themselves that prefer it.

I’ve also got a research background and I don’t like to guess — I like to know. And that means being informed by what consumers like and don’t like, and the understanding the choices they are making. So my game plan is active listening with the team, but also formal, statistical research-based listening that engages the consumers about what they really want.

SN: To what extent is your goal to grow membership in IGA?

Ross: Any business that is not growing is not healthy. And there’s lots of ways to measure that health whether that’s new banners or facilitating existing members to increase the draw rate of their store or increasing the kinds of channels they can use to draw shoppers into their stores. There’s also growth in volume, in margins and in retail clout. And I would suspect that IGA sets goals for all three of those.

And that’s a huge opportunity for retailers. The consumer is saying, “The draw rate of your store isn’t limited to a five-mile drive anymore. I’m willing to interact with you on a much bigger geographic footprint, if you can deliver a digital experience that fits my needs.” And so as I think about IGA’s future, I think IGA plus digital consumers is going to be very exciting.

SN: Where is the U.S. group trending in terms of growth?

Ross: As an outsider, my understanding is that U.S. membership ebbs and flows but it’s probably been flat. International is growing way faster than domestic has, and there’s obviously something to take a look at there. But this is not a story here about independents disappearing. There’s a story about how will independents change in the marketplace amid all the changes in the market.

SN: What’s your take on the landscape for the small independent today?

Ross: When you think about what’s up in the marketplace you have to start with the consumer. And then you see consumers adopting new purchasing trends, and changing behavior in a way that’s forcing change in the industry.

For example, my teenagers and 20-something children are not going to live in a six-bedroom house in a swim-and-tennis suburban neighborhood. Their future is re-urbanization, multi-unit housing, walking distance to neighborhood community services. That’s not a trend that going to stop. Millennials have different expectations of what they want their homes and community experiences to be. Then there’s the families themselves. You’ve got baby boomers downsizing to smaller houses, and the Millennials worried about the speed from farm to store to table in way that generations before them never even thought about.

If you asked what’s the future of grocery going to look like in the next 20 years, the answer is going to be very different than if you asked the same question in the 1970s. In the ’70s it was about homogenization, large efficient stores that served the largest assortment to the largest number of folks. Over the next 20 years it is going to be much more about intensely local, organic and customized. Ready-to-eat and ready-to-cook meals. And the ratio in a grocery store between the experiences and the products on the outside and the products on the inside, those are destined to change.

Is the future of retailing going to be to 100,000-square-foot stores like people thought in the superstore era, or is it going to be a 40,000-square-foot store with an intensely local assortment and with unique products and experiences that allow them to feel they’re getting the healthiest choices for their family? And if you look at the statistics and you say it will be latter, then the independents may be in a great place today. Back in the ’80s, people would have said “How will they ever compete with the super Krogers?”

[Independents] have got the real estate and the personalized customer relationships already, and they’ve got relationships with local suppliers that they can scale and the big retailers can’t. Those are all in their favor. But there’s one thing they have to embrace, and that is the digital relationship with the consumer.

Today, going online, doing research, talking to friends and family, reading an ad, going to stores, using your mobile phone – that’s shopping. And the consumer doesn’t make the multichannel distinctions we do in the industry. It’s all shopping to them. And so the challenge for the independents is finding a way to digitize the things that make them special – the intensely local and customized, personalized experience. How do they digitize that in way that the consumer is going to demand?

SN: Can they afford to do that?

Ross: If you looked at independents in the past you’d say they’ve got a disadvantage in clout and a disadvantage in the supply chain and they don’t have the IT infrastructure. And all those things would stack up in a way that would make you say, “Wow. These guys are at a huge disadvantage.”

But the irony is you can move these technologies out of these congealed, POS, legacy heavy infrastructure and move that into the cloud and suddenly everything looks nimble, the data is liquid, you can build digital capabilities using app-like technology that’s cheap and scalable.

And if you look at most grocers, you’ll see the online shopping experience for independents looks just as good as the big guys’ do. So if ever there was an opportunity for independents to leapfrog or at least compete, it’s now. The great news is they don’t have to invest in the heavy technology. By waiting, they are now in line to get technology that will look every bit as well as some of the biggest.

There are some core commonalities they will need. Independents will have to band together and act more like a common entity than perhaps they had before. The good news is they won’t have massive multiyear infrastructure investments that a small store could never do.

SN: How do you see independents fitting in in an industry that looks more price competitive today?

Ross: We are overstored as a country. We have a long history of overstoring that has decreased the draw rate of stores. There’s no question there will be more consolidation in this country. It’s inevitable. While it’s true things are getting more competitive and the average price of the daily food bill has been a major criteria why Walmart became one of the largest grocers in the world, there’s another trend: Look at what’s going on with Amazon. If you pull an average basket you’ll see Amazon is not the low-price leader. The shopper is paying a fairly significant premium for the convenience of an online system.

A healthy industry is not one where there’s not one massive online player and two brick-and-mortar retailers. Look at what’s going on in toys. Toys R Us is bankrupt and independent toy stores are having one of their best years ever. What’s going on there? I spent a number of years with Home Depot and people would always say you were going to put Ace out of business. We didn’t. There is a space for great retailers, but not for people who don’t change with the times. An obvious example is Amazon opening their own physical bookstores.

Great retailers no matter what industry, have one thing they do better than competitors and that is to listen to what the shoppers want. They’re great listeners. If it means cereal and other commodities on the inside of the store, they delivered that. If that means a packed and prepped meal you can swing by and pick up at a drive-through window, that’s great retail as well.

Amazon is teaching us all that consumers want a different definition of convenience. But they’re not the only ones that can deliver that.

SN: What else is ahead for IGA?

Ross: I’m hoping that we will increase the energy and excitement level for the independent channel. I hope we see the manufacturers lean back in and re-think the channel. Some of the things I shared with you here, I think may capture the manufacturers by surprise. I’m also hoping to bring some of the international learnings back into the U.S. And the final thing I would hope we could accelerate the credibility of what we are – essentially the 9th larger retailer in the United States, and make it easier for manufacturers to deal with IGA.