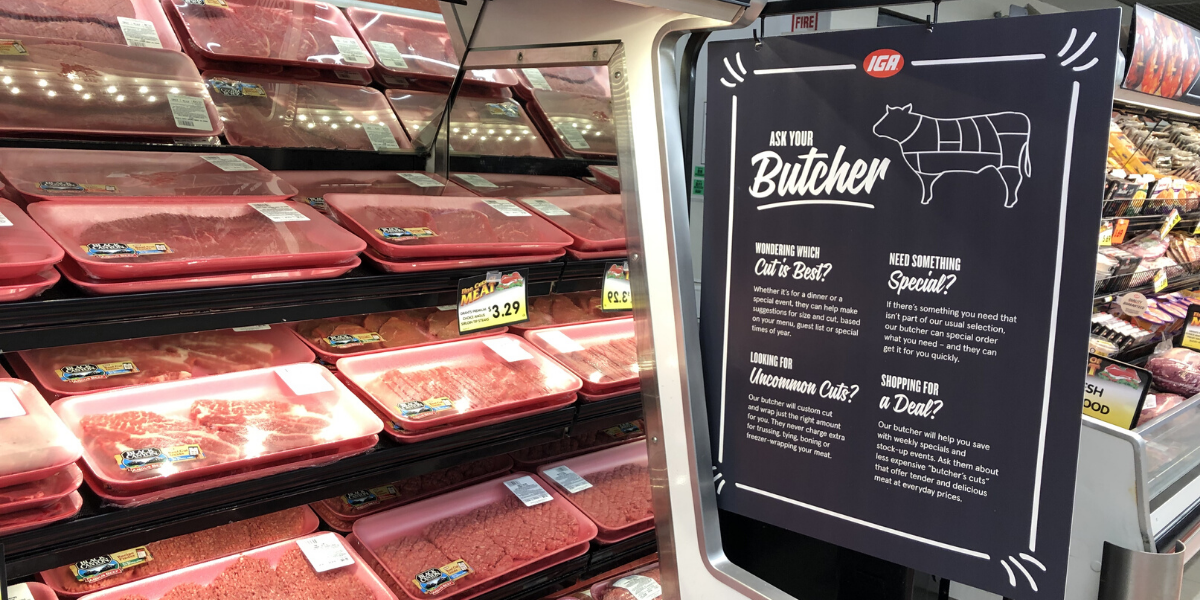 Serving Shoppers in a Meat Shortage

With meat processing plants closing due to workers infected with COVID-19, the once-solid meat industry is looking a bit shaky as of late. While there is plenty of livestock on U.S. farms, processing plants closed by COVID-19 outbreaks are creating a bottleneck that is impacting both supply and price, a message made dramatically clear at the end of April when Tyson’s board chairman John Tyson took out an ad in The New York Times to publish a letter on the matter.

"There will be limited supply of our products available in grocery stores until we are able to reopen our facilities that are currently closed," Tyson wrote.

Pork processing plants are drawing a lot of media attention, with three of the largest plants in the U.S. closing for several weeks, including South Dakota’s Smithfield Foods, Minnesota’s JBS, and Iowa’s Tyson plant. As of press time, these plants were scheduled to reopen in limited capacity this week, but with these three plants accounting for approximately 15 percent of pork production, the effect on the food industry has already begun. And it's not just pork. The USDA’s weekly livestock, meat, and grain highlights report shows pork and beef production are both down around 35 percent from this time last year, and chicken production is slowing. To break down the impact further, yesterday the National Daily Cattle and Beef Summary from the USDA reported an estimated 82,000 cattle were slaughtered. A year ago, 119,000 cattle were slaughtered on this day, which is a difference of 37,000 whole cattle.

According to a new report from CoBank, a nationwide network of banks and retail lending associations chartered to support the borrowing needs of U.S. agriculture and the nation’s rural economy, even if the reduction of processing capacity is temporary, it will likely have a lasting impact on meat processors, livestock producers, retail stores and consumers. "Meat supplies for retail grocery stores could shrink nearly 30 percent by Memorial Day, leading to retail pork and beef price increases as high as 20 percent relative to prices last year."

As Brandon Scholz of the Wisconsin Grocers Association summarizes, “It’s not that the meat supply is in trouble, it’s that the people in the plants are in trouble.” Last month, Scholz noted that the plant closures may not have a wide-sweeping impact on independent retailers' stock, explaining that it varies individually based on how often they receive deliveries from their suppliers. “I have heard that grocers have had to find secondary suppliers at times.”

With retailers starting to see both rising meat prices and dwindling supply, there are a few best practices to implement now to stay ahead of this supply concern.

1. Work With Your Wholesalers Now

If you haven’t already, contact your wholesalers to find out if—or more likely, when—they expect a shortage and if they’re seeing a price increase. You can then plan accordingly, deciding if you want to prioritize more available meats and poultry, or alternative proteins like fish, beans, and tofu.

Robert Rybick of Geissler’s Supermarkets, with seven locations in Connecticut and Massachusetts, has been working with his wholesaler to get ahead of the shortage. “Frozen meat was well in stock, and we instructed our guys to fill up freezers in case fresh is unavailable,” he says. “We sacrificed cases in other departments with our allocation to get more frozen protein in the building.”

2. Be Flexible and Ready to Supplement

You’ve placed your meat order with your wholesaler, but what will you do if your order doesn’t arrive in full? Phillip Blackburn, owner of four IGAs in Washington, is planning ahead by looking for alternative sources of supply.

“It’s really an advantage to be an independent,” he says, “being able to buy outside our usual sources when our wholesalers are struggling with shortages.” When Blackburn learned his regular wholesaler was allocating their meat shipments among their customers, Blackburn turned to Sysco—normally a distributor for restaurants—to beef up (pun intended) his supply. That ability to pivot quickly has kept meat on the shelves for his shoppers so far.

His location helps in the protein department as well, with his local fisherman in Alaska heading out now for Halibut season. Blackburn plans to take advantage of the catch by hosting a big seafood sale in a few weeks. “Halibut is as cheap as it’s ever been right now,” he says, noting the seafood sale will require a few adaptations to honor social distancing guidelines.

Supplementing with meat from local farms is also an option, especially with an in-house butcher. In early March, Kimberly Brackett of Brackett’s Market in Bath, Maine bought half a cow from a local farm to ensure her store had plenty during the early days of the pandemic-related shopping.

As many retailers learned during the Great Egg Pricing Debacle of March and April 2020, some shoppers are more frustrated to learn of rising prices and reduced supply than others—and more vocal.

When asked if his stores are posting signage about the meat supply, Blackburn says he and his meat department manager have decided against it for now. “We’re afraid if we put it up, people will start hoarding,” he says.

Rybick is taking a similar approach, saying, “In terms of communication, [we are] mostly informing customers we are in stock and have variety,” adding that most customers “are just happy they can find product.”

While that approach has worked so far for Blackburn and Rybick, it’s important to know your customers. Some stores have found that staying ahead of the supply lags by communicating early and often sets expectations with their customers. IGA has created signage for retailers to download, customize, and print to address supply concerns if you choose to take this approach.

Determining if you should limit the amount of meat shoppers purchase takes similar consideration. Grocers like Kroger, Giant Eagle, and Costco, are already placing limits on meat sales to prevent their supply from being disrupted by customer hoarding behaviors. Independent retailers may be more flexible based on their shoppers’ behavior. For example, Geissler’s Supermarket hasn’t put a sweeping limit in place. “On occasion, on a store-by-site basis, if an item is tight and we don’t have anything in the pipeline, we have applied limits, but this has been rare,” Rybick says. “We are seeing this as an opportunity to win customers longer term by being in stock and letting them buy what they want. It is our job to just keep pushing and filling our pipelines from every source possible.”

Refrigerated end-cap displays of plant-based meat substitutes from Impossible Foods and Beyond Meat can redirect meat shoppers to a reliable alternative, especially as these brands are expanding their presence in grocery stores throughout the country.

Offer shoppers options for meat alternative meal planning, such as:

Pivoting your advertising to focus on in-season produce and alternative proteins, whether meat substitutes or fish, can offer shoppers options they might not have thought of if they were panicking about another round of shortages during the COVID-19 pandemic. The key is taking advantage of the flexibility that being an independent retailer affords you, during this situation and in the future. As Blackburn says, “My sense is this is going to last awhile.” So prepare now, hang on tight, and hopefully it will be over before you know it.

7 Ways to Motivate Your Employees Now