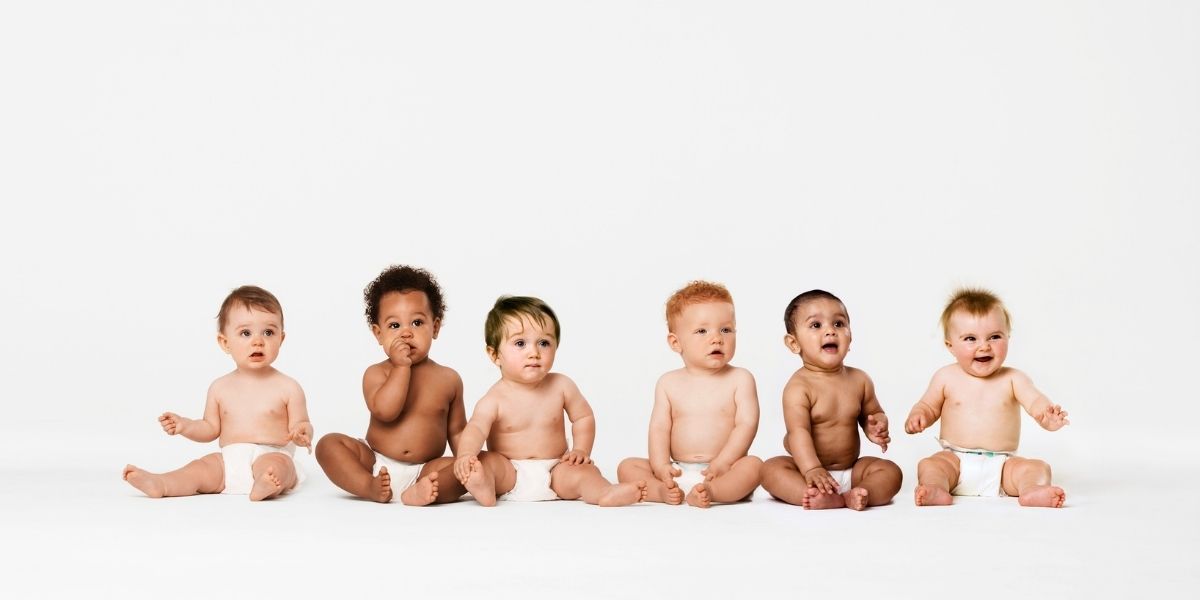 53.7 percent of infants received some formula in their first three months of life, and a whopping 74.2 percent received formula in their first six months, according to the Centers For Disease Control and Prevention's 2018 National Immunization Survey. With the number of pregnancies rising again after the COVID baby bust, the U.S. infant formula shortage is impacting many families across the country.

This supply chain crisis doesn't discriminate on store size or location—independents are just as affected as national chains. "To date, we have not seen unfair distributions and have heard that keeping shelves stocked with infant formula has been a challenge for everyone," Laura Strange, senior vice president of communications and external affairs at the National Grocers Association (NGA), said.

In a survey of its members, NGA found that most stores are dealing with formula shortages, the vast majority are unable to access specialty formulas, they are receiving inconsistent information from state WIC agencies, and consumers are panic-buying at their stores.

As the infant formula shortage enters its third month, independent retailers are doing everything in their power to keep formula in stock for frightened families while NGA is working closely with the White House, federal agencies, and Congress to ensure independent grocers are part of the conversation and solution.

"It was encouraging to see the White House commit to keeping an eye out for discrimination or unfair conduct as supply becomes more available," Strange said. "Independents are playing important roles in their communities and often times are the only grocery store in many rural and urban neighborhoods."

To ensure independents are a part of the solution moving forward, it's important to understand what caused the current shortage, what the federal government is doing to help, and how independents can aid families in need.

How did the formula shortage become so dire?

Like many products, infant formula saw shortages throughout the pandemic. In February 2022, Abbott issued a voluntary recall of several Similac products manufactured at their Sturgis, Michigan plant, with the help of the Food and Drug Administration (FDA) after a December 2021 inspection prompted by a series of events that included: a whistleblower report about dangerous manufacturing conditions at the plant, and four babies falling ill and one dying from a Cronobacter sakazakii infection.

"Abbott has about 40 percent of the market share for infant formula in the U.S., so one plant closure is having an outsized impact on the supply," NGA Vice President of Government Relations Stephanie Johnson said in a memo sent last week to members.

What is the government doing to help?

The federal government is moving swiftly to import and produce more infant formula. According to Johnson and NGA, those actions include:

How are federal assistance programs impacted by the shortage?

Some retailers may have already seen the unfortunate impact this shortage is having on federal assistance programs like the Special Supplemental Nutrition Program for Women, Infants, and Children (WIC). Strange noted that some retailers are only allowed to offer a certain brand for WIC redemption, and despite many states making an exception during the shortage, many WIC recipients are still unable to redeem their vouchers for alternative formula brands or product sizes.

How can independents help?

Independent retailers can continue to help their communities by adding their inventory data to the White House's website that will tell families where they can find formula. "The White House is creating a website similar to vaccines.gov that will use a geographic locator to share what stores have specific formulas in stock," Johnson said.

Updating a third party with your stock levels will take a bit of extra work, but it's worth it, IGA CEO John Ross said. "It's imperative that our retailers step up and contribute to this website. We're constantly fighting for a seat at the government table, and this is one way we can demonstrate that we will do everything we can when called upon to help our communities."

What are the best practices for alerting our customers to our stock levels?

"Constant communication is key to ensuring shoppers know what and how much is in stock," IGA Vice President of Communications and Public Affairs Ashley Page said. "In this situation, don't be afraid to post multiple updates on social media as they become available—shoppers in need will check online frequently."

Independent retailers are taking Page's advice. Berry Foods IGA in Cleveland, Georgia posted a photo on their Facebook page, sharing which products and brands were available and outlining their purchase limits, which sets expectations before the shopper sets foot in store. 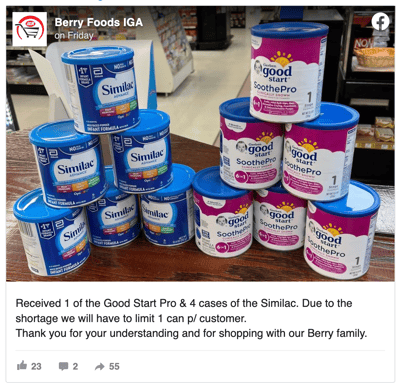 Geissler's Supermarkets in Connecticut and Massachusetts posted to Facebook when formula arrived at their stores, receiving over 20,000 views and nearly 800 shares in six hours due to the demand, according to Geissler's President and CEO Bob Rybick. "Sometimes it's as simple as the right product at the right time...nothing fancy," Rybick said about the two posts' success. 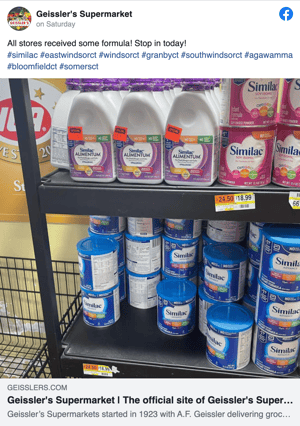 Retailers can also share the following resources for parents in need of formula on social media, in emails, and on their websites:

With so much at stake, independent retailers have the opportunity to remind their communities that once again, they are here to help. As families wait for recent government actions to have an effect on formula supply in stores, independents can share their inventory with the White House's technical team for the website they are creating while communicating directly with shoppers online.

How You Can Make Your Store More Sustainable