Around this time last year the U.S. went into lockdown in an effort to prevent the spread of COVID-19. Panic buying began in full force, and grocery workers got their first glimpse of how the global pandemic would impact their jobs. They hit the ground running, working overtime to stock shelves, clean every inch of their stores, and help shoppers get the food and supplies they needed.

"When we look back at that time, none of us would have believed we'd still be living in a global pandemic a year later, or that the grocery industry's frontline workers would join healthcare as some of the biggest heroes of the pandemic," IGA CEO John Ross says. "Starting with our associates in Wuhan and moving across the world all the way over to the U.S., IGA teams have stepped up each and every day of the pandemic to keep our communities safe and healthy. We couldn't be more proud of our associates or the IGA retailers who support them."

That pride in the way associates have handled the pandemic is shared by IGA retailers as well, who since the beginning of the pandemic have been doing their part to support and celebrate the teams that are making it possible for IGA stores to continue to serve their local communities no matter what challenges COVID-19 presents.

"Being an independent retailer means customizing everything you do to meet the needs of those you serve, whether it's shoppers or your own associates," Ross says. "The relationship IGA retailers have with their associates is like family, and they don't rely on corporate or government mandates to determine how to take care of those associates—they do what's right for the particular associate whenever the need arises. It's good for the associates and it's also good economic sense. Happy associates translate to better customer service and lower turnover, which is why our average employee tenure is so incredibly high. Every store in our system has employees who have been there for decades, and it's not uncommon for an IGA employee to spend their entire working career with a store."

In light of February 22nd’s National Supermarket Employee Day, we asked IGA retailers to share how they have celebrated their teams over the past year. Read on for some examples and inspiration for how you can continue to honor yours.

Like so many other independent grocery retailers, Jennifer Bosma, owner of two Harvest Market grocery stores in Fort Bragg and Mendocino, California jumped right in with employee appreciation efforts when the pandemic hit, and she hasn’t let them fall by the wayside a year later.

Initially, Bosma gave employees $100 gift cards as a token of her appreciation for their willingness to put themselves at risk to serve their communities. She implemented hazard pay in April, adding $2 an hour to employee wages. In June, she bumped the hazard pay up to $5 an hour, bringing it back to an additional $2 an hour in September, and still has not discontinued it. “The pandemic is still going, and so are our employees,” she says of the decision to continue the increased pay. Finally, as a year-end show of appreciation, Bosma increased the annual employee gift card amount by 33 percent.

Geissler's Supermarkets in Connecticut and Massachusetts also increased wages for their employees early in the pandemic. "We wanted to take care of our employees when COVID started," says Geissler's President Bob Rybick, noting that the company made the hourly pay bump permanent this past summer. They also gave every part- and full-time employee an additional 40 hours of paid sick leave so that they could quarantine for two weeks if needed and still get paid.

With 16 stores in Virginia and West Virginia, Grant’s Supermarkets have a significant number of employees who have stepped up to support the business and their communities. “The owners started by sending out personal letters to employees thanking them for their hard work,” says Pam Carter, marketing manager of Grant’s Supermarkets. They also gave Grant’s gift cards to all the team members to help with the extra food cost incurred by having more family members at home each day, and ultimately provided monthly bonuses for full and part-time employees.

In addition to monetary rewards, many IGA retailers have shown their appreciation for a job that continues to be well done with meals that provide a financial and morale boost for their employees.

Jeff Paul of The Village Store IGA in Oldenburg, Indiana cooked to show his appreciation. “I fixed all the employees a prime rib dinner that they all really enjoyed, then gave out store gift cards to all employees,” Paul says. “They are all certainly heroes!”

Many IGA retailers have helped keep employees' spirits high in this difficult time with employee events and recognition on social media, celebrating all they've done for their stores and their communities.

Harvest Market shifted the store’s annual October customer appreciation days focus to employees, offering a drawing for numerous prizes donated by vendors, like a barbecue, paddleboard, Firestick, Yeti cooler, $600 Amazon gift card, and more. Employees received three tickets each and could put the tickets in the bowl for the prize(s) they wanted, and then Bosma drew names for the winner of each prize. But she didn’t let those who didn’t win go unrewarded. Anyone who didn’t win a prize still received a $100 gift card.

Some IGA retailers went all out for the February 22 Supermarket Employee Day. At The Village Store IGA, Paul used FMI’s Supermarket Employee Day toolkit to celebrate his team. “I printed off the signs from the tool kit and hung them up all over the store,” he says. “Many customers commented and thanked the employees for the great service this past year.” He also used the graphics to post on the store’s Facebook page, which received nearly 30 comments of gratitude from shoppers.

Whitaker’s Food World IGA in Neon, Kentucky hosted a superhero-themed celebration complete with a photo booth, cake, and t-shirts. In advance of Supermarket Employee Day, they posted on their Facebook page, asking shoppers to come in and sign a card for their team. 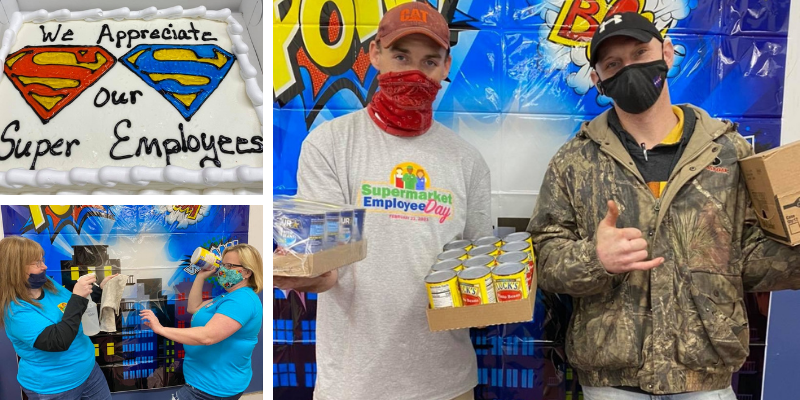 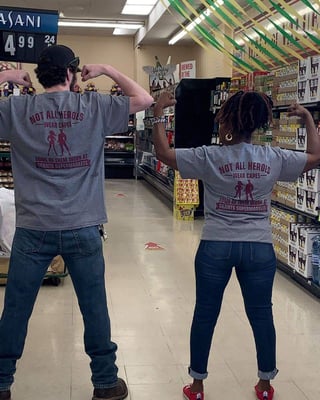 Mt. Plymouth IGA in Sorrento, Florida brought the employee recognition into their National Digital Ad, featuring a "Supermarket Hero" photo and snippet about the team member. 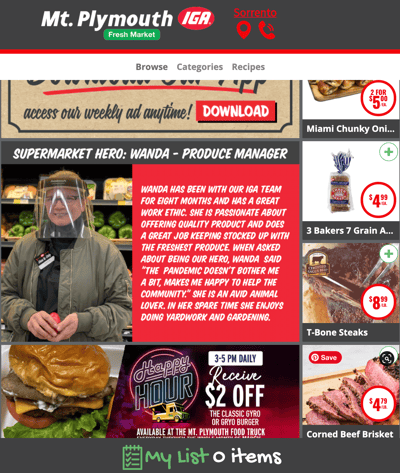 Find out how you can use the National Digital Ad to serve up customized, local content and offers to your shoppers here.

As the pandemic wages on, IGA retailers and their associates continue to serve and show their mutual respect and gratitude for a job well done. “It’s great working for a company that really cares about the employees,” Grant's manager Jay Farmer told the local newspaper. “It’s a really good thing.”

Have a story you want to share about how your store is supporting your community during the pandemic? Let us know!