Communities come together in times of devastation and can even receive surprise contributions along the way. After the historic flooding in Letcher County, Kentucky shuttered Isom IGA — the only full service grocery store for miles — Owner Gwen Christon received an outpouring of support from the community and grocery industry, as well as an abundance of media attention.

But it was Father Jim Sichko, a preacher based in the Diocese of Lexington, who brought the most surprising — and large — contribution.

“Well the first surprise is that you’re getting a new car,” said Father Jim when he visited Christon and the store on August 8, 2022. Next, he passed out $10,000 in gift cards to every worker of the store, followed by a final surprise for Christon and her husband Arthur: $20,000 in cash.

A few days later, Christon reached out to Father Jim to return some of the money so that he could use it to help others in the community.

“That has never happened. So I said — and I mean no disrespect — I said, ‘I will not let this woman top me.’” Father Jim told WKYT.

Father Jim's next calls were to NGA and IGA to think of a bigger way to help Christon and Isom IGA. "After brainstorming with Greg [Ferrara] at NGA and speaking with Gwen's wholesaler MDI, we decided to create a full rebranding décor plan and package for when she is able to reopen the store," IGA CEO John Ross said. "It will truly be a grand reopening, and one that is eagerly anticipated by the community and beyond."

With a plan in place, Father Jim collected donations from companies like Delta Airlines and University of Kentucky President Eli Capitulo, and came back with a $75,000 donation to help Christon reopen. Meanwhile, the Independent Grocers Alliance (IGA) created renderings for the new store. Father Jim, Ross, and NGA President Greg Ferrara surprised Christon with a visit last week to present the $75,000 and new décor renderings, which will be completed through MDI.

“It means a whole lot, not only for Isom, but all of Letcher County,” Christon said. “A month later – you start to have hope, but you don’t have any idea that someone is going to bless you in this way...you’re thinking you’ve got to do it yourself, but he’s come through to help us and I thank him, I really really thank [Father Sichko]." 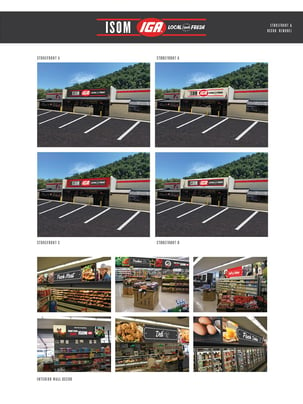 Many IGA retailers, as well as grocers and wholesalers across the country, have donated to the GoFundMe campaign or IGA Hometown Proud Foundation to help Christon rebuild and support the communities affected by the flooding, including the nearby Neon, Kentucky, where Whitaker's Food World IGA was also hit.

"The ongoing support from the Letcher County community, as well as outside donors like Father Sichko, prove that independent grocers are the heartbeat of this small town — it's not only a place to get groceries, it's a central hub for the town of Isom," IGA CEO John Ross said.