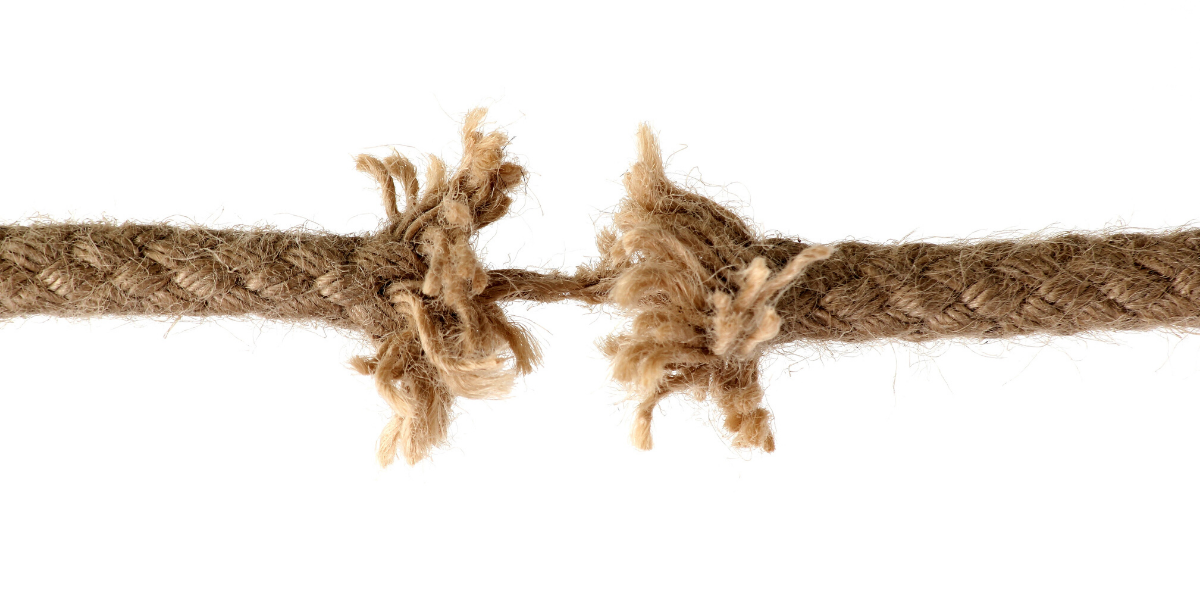 My boss was furious. Seemingly everything was going wrong. The grand opening of our new store was just days away and we couldn’t delay—the ads were placed, the signs were up. Yet the store was a disaster.

And as usual, he asked over and over, “What went wrong?”

In reality, a bunch of things went wrong. Suppliers were late with inventory. The crew messed up loading to the latest plan-o-gram and a day's worth of labor had to be redone. The software crashed and the tag library had to be completely reloaded. And on and on.

But the real answer to his question was, “Our people are getting tired and making mistakes.”

We live in a world where physical illnesses and visible injuries are respected. If my crew had been in casts and braces he wouldn’t have been so mad. But because the injuries were mental—and invisible—there was no way to have a conversation with him about the root cause.

Retail is like this all the time. The pressure builds and the managers have to work long hours; the assistant managers are exhausted from closing late, opening early, with no way to take time off and recharge.

I grew up in a retail culture of alpha personalities, managers who yelled and screamed and owners who acted like any weakness was a sign of being lazy. Maybe some of you can relate to intense owners (or maybe parents or grandparents) who didn’t spend a lot of time worried about the mental health of their team.

When I worked for a vertically integrated retailer, we did a root cause analysis of the damaged product in our warehouse. In over half the cases, errors and damages happened when the warehouse crew were working overtime.

We did a similar study of unresolved consumer complaints that came into the corporate office after a shopper tried and failed to get a resolution at store level. In over half of those cases, bad service happened because the person on duty was working an extra shift, on overtime, or had not been able to take normal days off.

The reality is that human beings get worn out. And when we are tired and stressed, we can’t perform.

The last few months have been more stressful, more challenging than any time in recent memory for the grocery industry. You don’t need to read this blog to know the pace of increased consumer demand is taking a toll on your company and on your own personal wellbeing. On a normal day, retail is hard. During COVID-19, it’s been an incredible challenge for everyone.

So the question is, what can you do, as a leader, to deal with the impact of invisible but very real mental stress?

1. Talk with your team about the events of the last few months.

Acknowledge that it is a tough time for everyone. Letting them know you understand the challenge means they have someone who appreciates the long hours, and understands the stress it causes.

2. Create a safe space to talk about stress.

Many people feel very uncomfortable admitting mental distress, and no one wants to be thought of as weak. But humans get burned out, and when they do it's bad for business. Letting your team know that you understand the risk of workplace stress will go a long way toward helping them talk to you before they reach the burn-out stage.

3. Be observant and proactive.

When you see a normally level-headed associate getting angry on the job, or a reliable cashier having shrink problems, intervene. As people become increasingly stressed, they lose the ability to self-diagnose and the more frustrated they become, the more stress builds.

Medically, this circle of stress-induced failures can be measured as build-up of stress-inducing chemicals in the body. Physically, you can observe it happening at work as sloppy workplace discipline, inappropriate emotional behavior, and declining customer service. Left unchecked, sustained stress creates nasty medical problems over time, from increased risk of heart disease, lowered ability to fight infections, and so much more.

According to an article in the Harvard Business Review  referencing several studies on stress, there are a number of low-cost, easy-to-implement techniques that business people can use to break the stress cycle. None of them involve reducing work schedules, or giving away more vacation time. Instead, the techniques involve interrupting the stress cycle before it loops again and again—recognizing the accumulating stress, walking away from it (and the task causing the stress), gaining insight during that break, and then returning to a revised normal state. It turns out, even little changes in behavior—just a few minutes at a time—have enormous positive impacts.

In one large eCommerce retailer’s warehouse, they use musical breaks to de-stress. Three times during the day, the audio system in the warehouse cranks up, they play a sample of a popular song (that the associates can nominate for the day’s playlist) and associates are encourage to ‘stop, stand, and stretch.’ "For the cost of nine minutes of labor, we cut warehouse injury rates by 22 percent and increased shipment accuracies by 28 percent," they told me. Some associates just stop and relax; others get up and dance. Even the most skeptical old-school managers started to embrace it.

One of our largest CPG manufacturers found out that associates weren’t actually taking their breaks, and many were working through lunch. With no budget, they decided to transform a break room. They painted it a soothing color, filled the table with buckets of Legos and puzzles, and switched out the fluorescent lights for less harsh floor lamps.

“Without making a big deal about stress, we just created a low-cost space that encouraged associates to calm and recharge," they told me. "Seeing a worker playing with Legos on their break seemed weird at first, but we’ve come to see that people are now more likely to actually take their breaks. Before, people were working through lunch, ignoring breaks and as a consequence, slowing down in the afternoons and losing productivity. After the simple changes, workplace productivity improved, especially in the later parts of the day.”

The point of these stories isn’t that we, as retailers, should spend money on touchy-feely tai chi programs or create a yoga room. Instead, it is to acknowledge that workplace stress is real; that it reduces productivity and increases health problems; that acknowledging and identifying an associate in stress is a part of being an effective leader; and that there are simple things you can do to reduce workplace stress, even when the demands of retail are higher than ever before.

Identify the stress in your own life

But there is another point to my blog: learning to identify the effects of sustained stress in yourself. As business leaders, we carry so much on our own shoulders every day, and that stress doesn’t just stop when we go home. We worry about payroll, about absenteeism, about in-stock rates and everything else all the time. No wonder so many of our industry executives suffer from higher risks of heart attack. Wholesale trade is ranked as the highest risk of heart attack profession in the U.S.; retail is number twelve, just after health care workers!

Acknowledging that you are at risk means being honest with yourself about the risks of being overworked. It also means challenging your own self-perception. Leaders often hold themselves to impossibly high standards, and though they can sustain incredible work schedules for inhuman lengths of time, they become increasingly unaware of the toll it takes on their own productivity and their own bodies.

I personally don’t like the way I behave when I am stressed. I get emotional, I let little things make me angry, I put harsh words into emails that I probably shouldn’t. And when called on to make business decisions, I know that I am not a great judge of risk when I’m frustrated and tired.

The folks in Las Vegas know this. They have studied it. There is a reason why the casinos have entertainment designed to keep you up long hours, bring your drinks and food to the gaming table, and are windowless so you have no concept of time—they know that as people become more tired, they spend money unwisely. They have built an industry taking advantage of exhausted people making high-risk bets.

Learn from the medical data. Learn from smart people in our industry. Learn from a predatory industry designed to take advantage of people under stress. And use those learnings to take your own burnout seriously.