As shoppers experience inflated grocery and gas prices, a business showing extra care for its employees matters now more than ever.

That was the case for hundreds of employees from the DTG Recycle team, a partner of Carnation Market Fresh IGA, located in Carnation, Washington. The recycling company wanted to host an event to celebrate their employees and decided to partner with a local small business: Carnation Market.

DTG Recycle rented out the grocery store for the event, giving their employees $250 in free groceries and $50 for gas. They brought their families out for the celebration and enjoyed meals from food trucks in the store’s parking lot.

“I've been in this business 40 years, and I've never heard of anybody doing anything like this. It was exciting and it was new,” says Mike Moss, who co-owns Carnation Market with Peggy Knapik.

Moss says the event was well prepared and welcomed 300 DTG employees along with their family members. He says the store did a week’s worth of sales in four hours.

“It was phenomenal. We're a small town, so it really worked out,” Moss says. “We were able to almost shut the town down and get people across the street...it worked out well for both of us.” 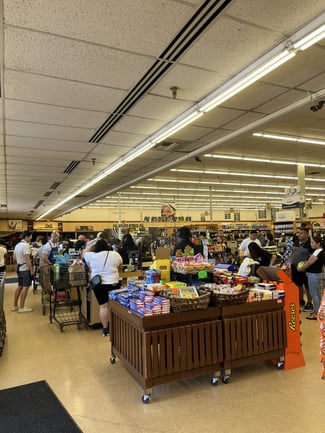 The DTG Recycling grocery event brought about 300 employees and their families to Carnation Market.

“Dan Guimont (our founder) wanted to give back to the employees above and beyond – and because of the cost of groceries and fuel, he wanted the company to use an independent grocer," says Jon Anderson, fleet safety and compliance specialist at DTG and Knapik's husband.

The event further helped the surrounding community after it ended, with local restaurants and the nearby gas station seeing increased business due to the extra people in town. Some of those business owners approached Moss and Knapik afterward, thanking them for the extra business.

"Everybody was thrilled," Anderson says. "I know that Peggy and Mike thought the event was fantastic. The employees loved it. Overall, it was just a fantastic event. A lot of people were really kind of set back, they were like, 'I can't even believe that a company is going to do this for its employees.' Nobody left without something that they wanted. I say the store did a fantastic job. I know that some of the suppliers went above and beyond to make sure stuff was there and they had extra meat cutters come in and help out, so it was a really cool event.”

These Stories on Best Practice