Everything You Need to Know about IGA Recipe Club

Think back to earlier this year before COVID-19 became the new normal. The world was a very different place in so many ways. Most of us had never even put on a face mask, visiting with friends and relatives was the norm rather than exception, and—get this—the average American was eating out between four and five times a week!  Yes, people are still picking up carryout from their favorite restaurant or picking up the phone for delivery, but one of the biggest changes of the pandemic is that they're also cooking—at a rate not seen in 50 years.

According to the FMI Foundation's new study, Home Cooking in America 2020, 40 percent of American adults say they are now cooking more. In addition, 23 percent say they are planning more meals in advance, and 18 percent say they are trying more new dishes. And this creates a huge opportunity for IGA retailers already benefitting from shoppers staying closer to home and shopping fewer stores.

"When shopper confidence is low, they retreat to the safe and familiar. In this case, that's been great news for our local community stores,” says IGA CEO John Ross. "Who we are and what we do is more important to shoppers than ever before, and we've been given the gift of increased sales because of it. Now, it's up to us to earn and keep those sales by really diving into the things that matter to shoppers."

So what matters to cooking-weary customers often juggling work, homeschooling, and an ever-present concern for the health and safety for their families? One obvious answer is an easy button for putting fast, healthy meals on the table, and IGA Recipe Club, a new IGA program designed to make smarter meal planning simple for IGA shoppers, is one of many ways IGA is helping IGA retailers meet that need.

The recipe is only the beginning

The premise of IGA Recipe Club is simple—shoppers sign up on IGA.com or through the National Digital Ad to have the latest recipes sent to their inbox.

"The newsletter itself is really just the beginning," says IGA Recipe Club editor Megan Drazer. "Think of it like a portal to all kinds of sales-driving shopper marketing content and offers that will help shoppers feel smarter about the choices they're making to get food on the table. The Recipe Club will be working in the background on behalf of IGA retailers to expand their reputation as a meal solutions resource, and the retailers don't have to do a thing to get that brand recognition."

While it's true that all IGA retailers will benefit from the Recipe Club regardless of what they do to promote it, you can make the program even more effective when you add in the Family Meals Made Easy! in-store display element.

How the IGA Recipe Club & Family Meals Made Easy! work together

Retailers who want to make their store a one-stop-shop for quick and easy meals are encouraged to order the Family Meals Made Easy! POP kit and build recipe displays using the evergreen hanging sign, Recipe Club recipe cards, and a stanchion sign with QR code linking to IGA.com's Recipe Club.

"We know IGA retailers are busier than they've ever been," Ross says, "and it's not lost on us that as much as you're doing right now, rolling out a display campaign means we're asking you to do more. But there's a great reason behind it: shoppers need quick and easy meal solutions more than ever before, and we want to give you every single resource we can to meet their needs and keep the sales you've picked up. These programs work together. Recipe Club drives traffic to your store, and store displays drive traffic to Recipe Club. In the end, the retailer wins with increased sales and brand reputation, and the shopper wins with better shopping and mealtime experiences."

Ready to put Recipe Club to work for you?

IGA has a continually updated bank of recipes sourced from IGA bloggers and Red Oval Partners, all designed with flexibility in mind, meaning you can promote with as much or as little effort as you want.

If you're looking to take full advantage of the Recipe Club and the Family Meals POP,  then building displays is what you're after. Shoppers can sign up for Recipe Club using the QR code from the POP. Then when they receive the Recipe Club newsletter twice a month, it will draw them back to the store to look for more recipe ingredients.

2. Moderate effort/medium reward: Build displays on your own schedule. Pick and choose what you want from the recipe bank and build away! Whenever possible the recipes are unbranded, giving you the opportunity to build displays based on the products you have in-stock. 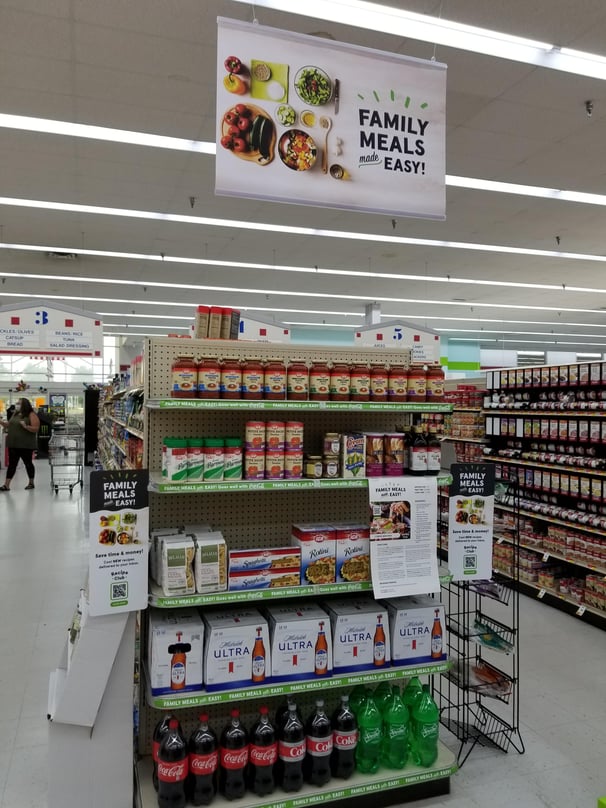 If you choose to build displays, just be sure to add the appropriate recipe card to the display to entice shoppers. Click to download recipes from the recipe bank, and have them printed in color on 12x18-in. hard card stock, or order direct from IGA Red Oval Partner DG Graphics. And since there's a QR code on the recipe card that takes the shopper directly to the recipe on IGA.com, there's no need to print or purchase more than one card per recipe.

Not ready to commit to building displays? No problem. You can still get the word out about Recipe Club by promoting recipes from IGA.com to your social media pages with a click of a button. And remember, even if you do nothing, you'll likely still have shoppers signing up for Recipe Club when they see it on IGA.com and in the National Digital Ad!

How Independents Can Help The Infant Formula Shortage