With unemployment at its lowest levels in decades, how can small, independent retailers find the right employees?

It’s a question independent grocery store owners all over the country grapple with, especially those in rural communities that tend to have an aging workforce and a shortage of steady, dependable laborers.

“Obviously retail is known for plenty of entry level jobs with higher levels of turnover—that’s the nature of retail,” said Paulo Goelzer, CEO of the IGA Coca-Cola Institute. “Especially for smaller stores, which have a high demand on employees, it can be hard to find people.”

In a previous article, Goelzer shares advice on how to fine-tune your hiring process (click here for a refresher on this topic).

When it comes to getting out and finding your ideal candidates, Goelzer shared a few methods and avenues to consider:

Increasingly, retailers and job seekers alike are turning to online methods as one of their top tactics. For starters, look at the NGA Foundation’s Career Center at www.grocerycareer.org. In addition to a variety of job postings specific to the grocery industry, the Career Center provides job seekers with resources such as resume writing advice and interview tips. The Career Center also offers a wealth of opportunities for companies looking to build their benches and enhance their workforce.

In addition to online job boards, IGA retailers are beginning to explore another low-cost and effective online option: social media.

Eric Anderson is principal at AR Marketing, the Red Oval partner that created IGA’s social media program, offering low-cost social media services and site management through two different IGA programs. He says working with clients on job postings has been a part of their services for the past seven or eight years and it’s a practice that keeps growing.

“When you look at social media compared to traditional classified ads, it’s a very inexpensive way to recruit. There’s no easier, more effective way,” said Anderson. In fact, it’s the main tool AR Marketing uses for their own hiring needs, he added. “Twitter, Instagram, Facebook—anytime we put something out there, resumes flood in.”

That’s the experience North Albany IGA in North Albany, Oregon had when the store recently used Facebook for its first help wanted posts.

“We overall saw a better, more qualified group of individuals. It’s going to make the decision more difficult of who to hire,” said Store Manager Charlie McKissick. “I don’t feel like I can make a bad decision.”

The store just marked its one-year anniversary and they used their local WorkSource Oregon office to assist them in the initial hiring event, but since then haven’t had as much success with referrals through employment centers, he said. Hitting a recent period of growth, the store has openings across a handful of departments, with the opportunity for advancement in several positions, said McKissick, who added he would definitely use Facebook again as his new go-to source for posting job notices.

One of the benefits to using your social media channels is you are able to reach out to people who are already following and engaging with you, and are familiar with your store and culture. Paying for a boosted post helps you broaden that reach even further, said Anderson.

Word to the wise: It’s always a good idea to try several approaches to recruit in case online channels don’t pan out. John Hughes, assistant director of Camano Plaza IGA in Camano Island, Washington, reports having a “50/50” success rate with finding the right people through posts made on Facebook, Craigslist, and various online job sites, which is why they also rely on word of mouth and referrals—particularly for overnight shifts, which can be harder to fill. “It might not always work, but it does get people in the door that you might miss otherwise,” he said of Facebook ads like this one.

In a small, tight-knit community like London, Kentucky, home of E.C. Porter IGA, posting to Facebook is the digital word-of-mouth equivalent of putting a “help wanted” sign on the store door, which is their usual tactic, says Assistant Manager Marjorie Lewis. A post on April 12 about needing cashiers and deli staff was shared 138 times. “I had several people mention they saw it on Facebook,” Lewis said. Although popular, the post didn’t net enough applicants to fill all their openings, but given that Facebook is both cheap and easy to use for job postings, Lewis said they plan to post again. 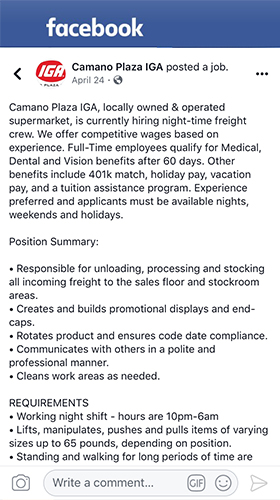 Many job openings are for hourly associate positions, which fit in well with recruiting on platforms such as Facebook or Instagram, said Anderson. When it comes to hiring management positions, many companies either don’t think to use social media, or they overlook the potential of using different channels such as LinkedIn or even YouTube, which can be useful places to recruit upper level employees.

“YouTube is overlooked but it’s a great place to be,” said Anderson. Some content ideas could range from the following:

Anderson shared some tips for crafting your job posts on Facebook (and other channels):